David Freeze: A wonderful stop by home on a beautiful day 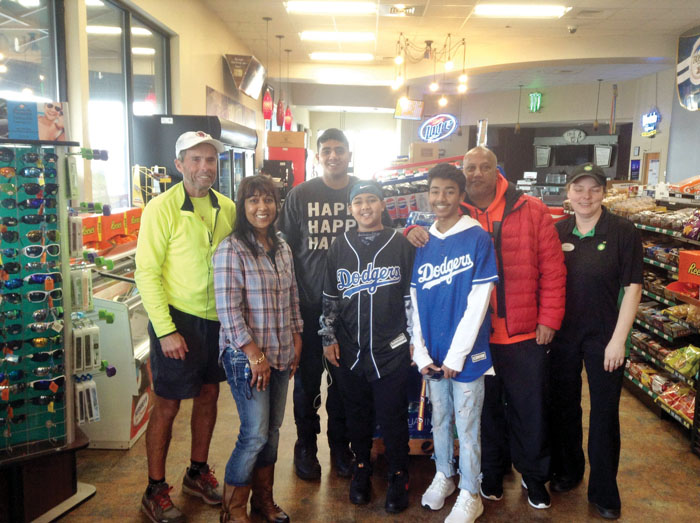 BeBe (next to Freeze) and her family and workers at the H and B Market BP in Cleveland on Saturday morning. David Freeze / for the Salisbury Post

I suspected I might see a friend or two on the road as I neared home on Saturday. It didn’t take long. The morning was peaceful and the sunrise beautiful as I left Statesville on familiar roads beginning with U.S. 70. By 8 a.m., neighbor and ultra marathoner Kenneth Todd had already joined me. He caught a ride with another neighbor, Jay Bates, and we did the first ten miles together, almost reaching Cleveland by that time. Kenneth plans to do the run across N.C. later while trying to beat the fastest time that we know of. One guy did it while being supported and averaging 45 miles a day. Kenneth will try for 50 but he said, “I won’t be stopping to talk to people along the way like you do!” Kenneth and I often see each other during our morning runs.

Kenneth caught another ride with Jay to breakfast, and I stopped at the H and B Market in Cleveland. BeBe is one of the owners and she gathered everyone around to take a group picture. I enjoyed meeting her family and coworkers.

Just after I left the market, longtime friends Dan and Sandy Pflughault pulled over and we talked in the parking lot. They brought me a bag of Reese’s Cups and a couple pairs of gloves for the cold mornings. I have known both Dan and Sandy for at least 30 years and it was great catching up with them.

I made it through Cleveland before Mike and Debbie Long, more longtime friends, stopped to talk. They were headed to Hickory where I had been two days before. Mike and Debbie talked about our kids and then how they like to go exploring with their car. I told Mike and Debbie about Valdese and it sounded like they planned to visit there today.

It was not over yet. Just after passing West Rowan High School, Buddy Hoffner drove by and stopped just ahead and it was not long before he was joined by Emory and Susan Graham. We talked about staying active and Emory and Susan had recently had good success with a juice diet and regularly ride their bikes together. All three are friends from so long ago, I don’t remember when.

Not a quarter mile later, David Ketner stopped his motorcycle in the road and we talked for a while about my journey and baseball, two wonderful topics. Almost immediately, Phil Dwiggins pulled over in a Locke Fire Department tanker truck. This time, my friends had the road blocked.

I was so impressed that all these fine people took time out of their day to find me on the way home. Hoffner, Graham and Ketner were longtime softball teammates, a very special time in my own life that fostered many lasting relationships.

I ran up Weaver Road just as my neighbor, Ollie McKnight was going out to get her mail. She didn’t see me until I stopped right in front of her. She said, “You came all the way from Statesville already?” I couldn’t believe it myself.

It was a beautiful day highlighted by time with good friends, every one of them well versed in the recent happenings of my cross-the-state adventure. So very cool!

I will be home for today and Monday taking care of various responsibilities and healing up a little bit. I have developed a blister and a lingering shin splint but both did not get worse today. The road will beckon again on Tuesday morning, in fact it already is.

I will see you again in Wednesday morning’s Post after the journey resumes on Tuesday. Thanks so much for reading and your continued support.