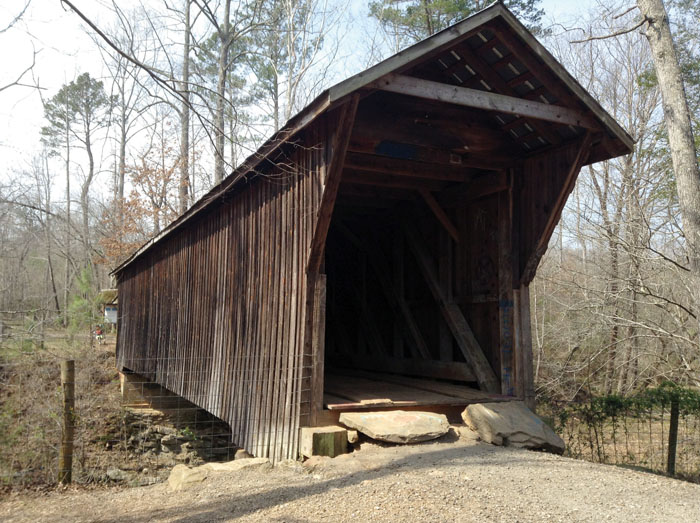 The Bunker Hill Covered Bridge. Catawba County alone used to have as many as 19 covered bridges. Now only two remain in North Carolina. David Freeze/for the Salisbury Post

The goal for Friday was to make it to the south side of Statesville from Hickory while remaining on U.S. 70. I expected traffic to be challenging and not much in the way of road shoulders.

A lot of that contemplation was done at the Budget Inn in Hickory while watching Davidson play Kentucky on Thursday night. Something miraculous happened during the game, leading to a very interesting day Friday.

I had a good price on the room and was watching the game in just a so-so room. About two minutes into the game, the power went off. I ran to the office and told the owner, who gave me another key saying, “You should have told me you wanted a nonsmoking room.”

I don’t think the question came up. What I found in the new room was one of the best motel rooms of the whole trip. Everything was perfect. I got lucky on that one, for sure.

It was a clear and mild morning in Hickory, and I hit the road about 7:30 a.m. Traffic was just moderate in the beginning but gradually built as I headed toward Newton-Conover. I did get to see Hickory Motor Speedway, which looks just about the same as it has for many years. It does have a busy schedule for 2018.

I couldn’t really tell what was Newton and what was Conover, but when I got there, the highlight was U.S. 321 turning off and taking most of the traffic with it. I hardly had to jump off the road at all for the next three hours as I passed through Claremont and some beautiful countryside.

The absolute highlight of the day and one of the best of the trip happened next. I saw a sign for the Bunker Hill Covered Bridge, which is one of the last two covered bridges in North Carolina. The bridge was built in 1894 and is part of a small park now. Farmers in those days built a bridge like they did a barn, by gathering together and building it quickly.

Being only about 500 yards from U.S. 70, I couldn’t miss it. While at the bridge, I met a pleasant couple and enjoyed talking with them but then got excited when I found out what they were doing. David Frazier had proposed to Amy on a December day with snow around this bridge. They had come back to revisit it Friday, just a few hours before their wedding.

We made pictures all around, and I told them about my journey while they told me about how the proposal happened. We even talked about running and running shoes. Eventually, David said, “I guess we better go; we’ve got to get ready.”

We wished each other the best, and they waved as they drove away. Suddenly the day had taken a turn for the better. I’m glad they didn’t need any wedding advice.

I kept going and was near Statesville when I saw Randy Stewart working on his race car. He told me that his dogs would bark but they were inside an invisible fence, so not to worry.

Stewart told me that he raced the car at Millbridge Speedway at well over 100 mph. He let me get in it, which was the hardest thing I did all day. The cockpit of that car was so tight that I could barely get in, and Stewart is much bigger than me. He said, “There is certainly a technique to it. When I bought it, I told the guy that I would buy it if I could get in it.”

I told him that I would come see him race after I make it to the Outer Banks.

To stay loose, I have started picking up all the nails and sharp screws that I see along the road. I am glad to have no flats so far and hope by removing the nails and screws, maybe someone else won’t get a flat either. I am still picking up loose change and got two dimes Friday.

I stayed at the Motel 7 (not 6) in Statesville on Friday night after getting a big Waffle House meal from Stephanie, Randy and Mike. The Motel 7 folks moved a big flat-screen into my room so I could watch basketball.

Today, I will continue on U.S. 70 until its intersection with 801 and head home. I have several commitments on Sunday and Monday but will be back on the road Tuesday.

It has been a great day with 33 miles, good people and the best weather yet. See you back tomorrow as I recap today’s journey.