David Freeze: Back on the road with a strong tailwind 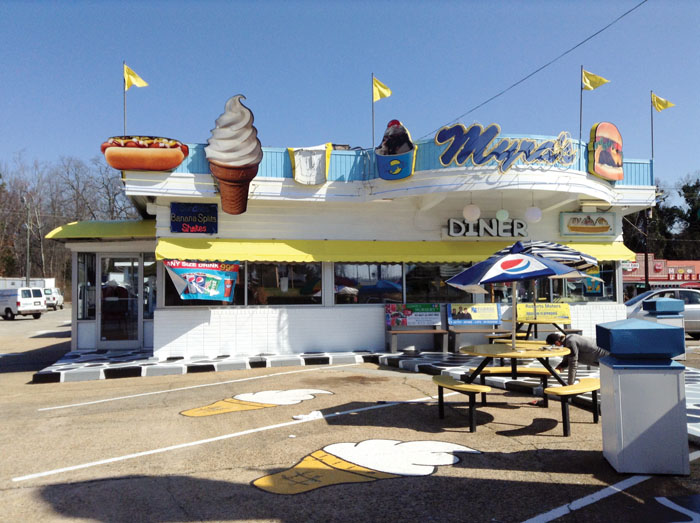 I can't wait to get started on some good ice cream. This was Myra's Diner in Valdese. David Freeze/for the Salisbury Post

I couldn’t wait to get back on the road Thursday. After a successful start to our spring beginning runners class Tuesday night and a wonderful meeting with the Lions Club on Wednesday, I was excited about covering more of our great state on foot.

Wayne Crowder took me to Morganton Thursday morning with perfect timing. We arrived just as there was enough daylight to hit the road. Crowder was gracious enough to make the drive very early, and I certainly appreciated that. I got out at the exact same spot where Amber picked me up, so the run/walk is still official.

Thursday’s journey began at the corner of Interstate 40 and U.S. 64. For the first time, I left 64 shortly afterward to follow U.S. 70 through some of my favorite little towns — Drexel, Valdese, Rutherford College, Connelly Springs, Icard and Long View.

Traffic wasn’t particularly bad at any point, and I actually had some road shoulders occasionally. Either way, the drivers were considerate. I probably got more waves Thursday than at any single day yet.

I hadn’t been to Valdese in quite a while and found it to be quite beautiful with a booming downtown.

Two unusual things happened. One lady was motioning me to get off the road as she drove slowly toward me. There was no other traffic close by, so her motions didn’t make much sense. Even more interesting was a car that was driving toward me using a large video or TV camera as they passed by.

I noticed the car stopped across the road and sat in a parking lot for a while before leaving. I never saw them again. It could have been a couple of my ex-wives, but I don’t remember any of them having such a nice camera.

The best things about Thursday were two great encounters in the morning. I met Jeff Johnson, who was working along the side of U.S. 70 just as I entered Valdese. He gave me some tips on where to stay for the night and talked about moving to Hickory from Avery County. He and his wife enjoy a milder winter than they did in Avery. We had a pleasant conversation just as the morning cold was breaking.

I was crossing a side road when Wayne Collins of Connelly Springs saw me and turned around to have a conversation. Collins was interested in my jogging stroller and wanted to know if it was possible to put pedals on it. I told him that I had seen recumbent road bikes that look very similar on some of my long rides.

Collins told me that he was working on making a pull-behind train of 50-gallon barrels with wheels. I told him about the cow train at Patterson Farms, all painted as Holstein cows. Collins liked that idea. Another enjoyable conversation.

My room for the night was at the Budget Inn at the intersection of 70 and U.S. 321 in Hickory after a fairly easy 24 miles.

Today’s goal is Statesville, and I will stay on U.S. 70 for that too.

The warm afternoon Thursday was quite nice, especially with that strong tailwind. It actually helped push me up the few hills that I encountered. It was good day, No. 11 so far. I think I am officially out of the worst hills but there will be plenty of up and down over the middle third of the trip.

Meet me back here tomorrow as I get nearer to Rowan County.