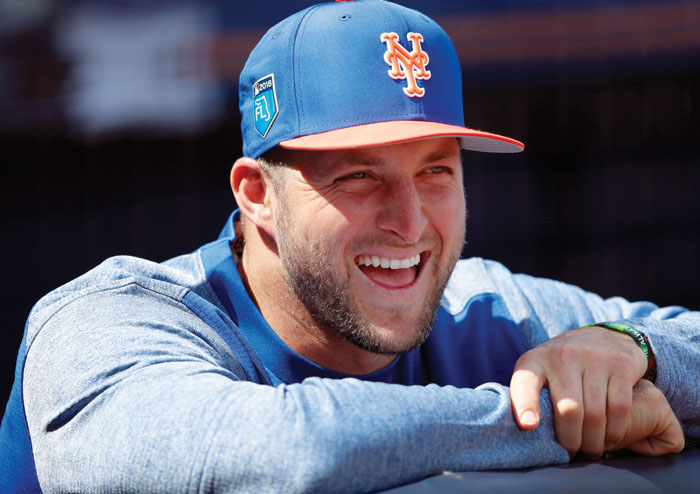 PORT ST. LUCIE, Fla. (AP) — Tim Tebow was reassigned by the New York Mets to their minor league camp on Tuesday after he went 0 for 4 with four strikeouts in an exhibition against the Houston Astros.
The former NFL quarterback and 2007 Heisman Trophy winner hit .056 (1 for 18) with 11 strikeouts in seven big league exhibition games. The 30-year-old, who is not on the Mets’ 40-man roster, has been hampered by a left ankle sprain.
“I’ll just continue to work in all the areas we’ve been working and making progress. That’s really the focus — to continue the process and the journey and keep working,” Tebow said to reporters following the game.
Tebow’s only hit was a hard single to center off Washington’s Erick Fedde on March 2. He has been used solely as a designated hitter or pinch hitter because of the injury.
“The ankle was kind of disappointing. I got to put in a lot of good work and feel like I’m improving. It’s getting there,” Tebow said.
Earlier in spring training, Mets general manager Sandy Alderson said he thinks Tebow will be in the major leagues one day. Tebow said that was not his focus right now.
“It’s definitely the goal, and we’ll be putting in work every day to one day get that opportunity, but you can’t just be focused on the end result. It’s got be on every day in the process,” Tebow said. “It’s having a long-term mindset with a here-and-now focus.”
Tebow, an outfielder, can appear in games for New York but would have to be brought over from the minor league side.
He said being in a major league clubhouse for the first time was rewarding.
“It was a lot different being around the guys all the time, being able to learn a lot more, go through drills when I could and get some meaningful at-bats, too,” Tebow said.
New York also reassigned right-hander Kevin McGowan to the minor league camp on Tuesday and optioned right-handers Gerson Bautista, Marcos Molina, Jamie Callahan and Corey Oswalt to minor league affiliates.
___
More AP baseball: https://apnews.com/tag/MLBbaseball