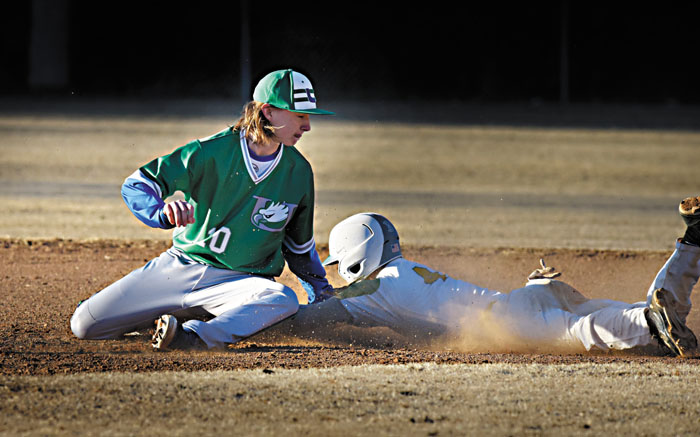 Wayne Hinshaw/for the Salisbury Post ... Above: North Rowan’s Brett Tucker (4) is tagged out by Uwharrie Charter’s Trevor Maness (10) on a steal attempt at second base. Below: Tucker dives back into first base, prior to the steal attempt.

Things got messy Wednesday night in Spencer — where the Cavaliers watched visiting Uwharrie Charter bat around in both the fifth and seventh innings, draw 11 walks and collect 11 hits in a frigid, 12-1 Yadkin Valley Conference victory.

“We played four solid innings,” first-year coach Mike DeSantis said. “After that, we fell apart. The defense couldn’t field the baseball and we couldn’t throw strikes.”

North (3-3, 3-2) committed three errors and managed only four singles — just one came after the first inning — and suffered its second consecutive conference loss. Uwharrie Charter (4-0, 3-0), a surprise front-runner in the league standings, received an illuminating performance from right-handed pitcher Caleb Walker, a freshman who hurled five shutout innings in his second varsity appearance.

“It’s rough playing games in this weather,” winning coach Van Hurley said. “And really hard to pitch effectively. But (Walker) spotted his fastball and we played defense behind him. His off-speed stuff was a little off, but that’s because it’s so cold out here. On nights like this, it’s harder to manipulate the ball.”

North starter Mack Koontz allowed Kody Bauersfeld’s leadoff double in the top of the first and Colyn Grissom’s sacrifice fly two batters later. North had a chance to tie the score against Walker in its half of the first, but couldn’t a runner past second base. Brett Tucker opened the inning with a ground-ball single into left field, but was promptly erased attempting to steal.

“It was a hit-and-run that wasn’t well-executed,” said DeSantis. “Our runner at first did sort of a shuffle, shuffle and steal. If it had been a straight steal he would have been safe. That play changed the whole dynamic of the game.”

It was unfortunate because North outfielder Jordan Goodine later delivered a two-out, line-drive single to left and teammate Kobe Dupree followed with an infield hit. The rally fizzled when McGuire Smith bounced out to first base, the first of eight groundouts induced by Walker. “He kept them off-balance,” Hurley explained.

Uwharrie stretched its lead to 2-0 in the top of the third without getting a hit. Koontz walked a batter, hit another and surrendered Grissom’s run-scoring groundout. Koontz — also a freshman right-hander — was yanked after allowing Bryson Hamlett’s base hit to right and walking back-to-back hitters with one out in the top of the fourth. Lefty reliever Chase Shoaf defused the rally, thanks to Tucker’s tumbling, Ringling Brothers catch in center field.

The game got out of hand in the the Uwharrie fifth, when four walks and a pair of RBI-singles helped the Eagles extend their lead to 6-0. North’s bullpen faltered again in the top of the seventh, when the guests scored six times against right-hander Charlie Durham. No. 9 batter Trevor Maness did the most damage, providing a pair of run-scoring hits — one against Durham and another off Jonathan Hillard.

“We have a pretty young team,” said DeSantis. “We’re working from the bottom up right now. The first four innings was where it’s at for us. We need more of that, but we’ve just got to keep working.”

NOTES: Shoaf got North’s final hit when he grounded a leadoff single to left in the second inning. He was retired on a double play. The Cavs scored against reliever Matthew Brewer in the sixth. Goodine reached on an error and crossed following a groundout and two wild pitches. … Koontz walked four and allowed two runs in 3 1/3 innings. Shoaf and Durham was reached for 10 runs — six of them earned — and seven walks in a combined 3 1/3 innings. … Bauersfeld reached base four times and scored three runs. The Eagles were 6-for-6 on stolen base attempts. … Smith will start for North in a rescheduled game at Uwharrie Charter tonight at 7.