David Freeze column: On the road early with a purpose 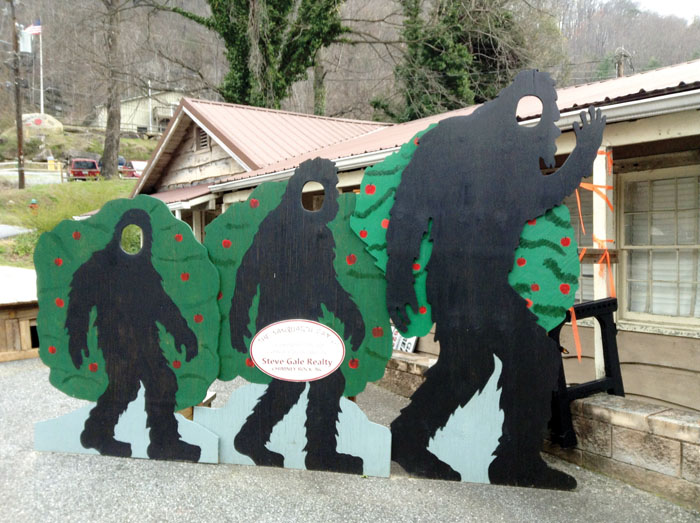 This Bigfoot family was just one of many references to them in the Chimney Rock area. David Freeze / for the Salisbury Post

The weather has certainly been a huge part of the first portion of my cross-the-state adventure. The snow and cold gave way to clouds on Saturday with a forecast of cold and steady rain. Nothing happened Saturday and neither did it start overnight. I was overjoyed to look out at 4:45 a.m. this morning and see the road dry. No doubt, the rain was still coming but I wanted to get a jump on it. My feet hit the pavement at 5:30 a.m., the first morning of Daylight Saving Time, and it was quite dark.

Leaving Chimney Rock and passing through Lake Lure so early netted not one moving car. I did see two deer just ahead of a road sign that posted U.S. 64 turning left to head east. My youngest daughter had been married at Lake Lure so I knew something about all the Dirty Dancing history. The lake is still way down for repair, just as it was three weeks ago when I checked out the area.

About halfway to Rutherfordton, my goal for the day, the rain did start to fall. It was very light at first but became steady enough to allow for some standing water in the road. For more than three hours, the cold rain tried to find an entry into my clothes and mittens. Nothing got very wet but I was ready for a heated room.

Another driving force for my early start was a particular basketball game that I wanted to see. I have had season tickets at Davidson for at least 20 years and they had qualified for the A-10 tournament final today. Game time was a very early 1 p.m.

A humorous scenario followed while trying to beat the rain and get into a motel for the game. I had called the Dogwood Motel in Rutherfordton about 10 times while trying to check rates and availability. This was the only motel on my route and others were at least 4-6 miles away. No one answered at the Dogwood either last night or this morning. Plus, the reviews online were not complimentary. Other options were not good, so I desperately wanted this to work out.

I came to the office about 12:30 p.m. after 23 miles this morning. The very nice owner told me she had been full but just had someone check out although the the room was not ready. With yesterday’s Wi-Fi problems, I asked about it. I got the perfect answers, meaning a quick turnaround on the room, great Wi-Fi, friendly owners, a nice room and a fair price. Another case where my prayers were rewarded. I spent the time watching the game while drying my clothes and now look forward to an early bedtime tonight.

Not much happened today on the road. The only conversation was with a guy in a huge pickup who turned around to ask about what I was doing. He offered to take me on into town, which I had to decline. Sadly, he was talking while holding up traffic or it could have been a much longer conversation. Later, he drove by again during the heaviest rain.

There is not much more to tell. Davidson won and I am dry and comfortable on a chilly, wet day. I will head for Morganton tomorrow on a stretch that I think will be very challenging due to traffic. There are no shoulders along the way and no towns in between, so I am likely to be balancing the baby jogger on the side of the road often.

Thanks again to sponsors Ralph Baker Shoes, Gear for Races and Vac and Dash.

The trip is rolling along. I have no regrets on anything so far through Day 9 of the journey, now just short of one third of the total projected mileage. See you back here tomorrow!