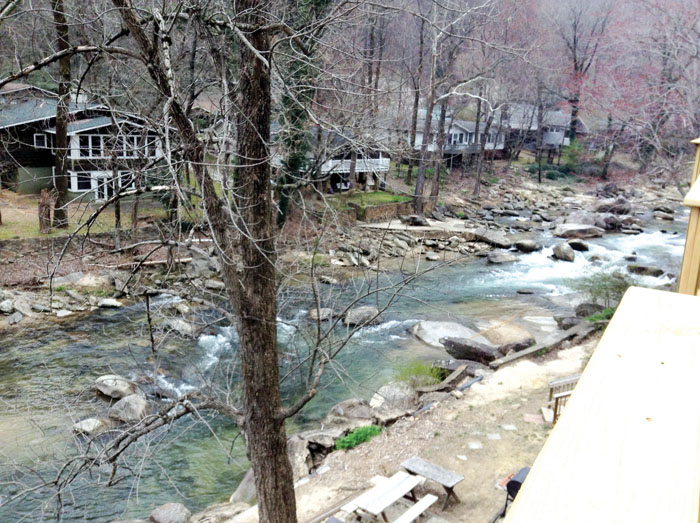 This was the view of the Broad River from the Riverside Motel on Saturday afternoon in Chimney Rock. David Freeze / for the Salisbury Post

The sun came up in Hendersonville with no rain and certainly no snow. The early temperature was 31 and slow to rise, but still much better than just north of this area where the snow did come. As of almost 6 p.m., there is still no precipitation which will probably change in a big way tonight and tomorrow.

For almost three miles heading east, I had sidewalks and then good shoulders. Suddenly, it all went away and I had to hug the white line and jump off the road often. The drivers were all very considerate and gave me plenty of room. Very quickly, I was in apple country as I passed through  Edneyville. Orchards and packing houses were everywhere. One stop light was all the town had and that one didn’t do much. I had several friends from Edneyville when I attended Western Carolina University. I stopped at the busiest store to get an egg and cheese biscuit and took time to ask about them. Nobody at the cafe was sure of anyone by the names I gave.

Traffic got even lighter as I kept going toward Bat Cave. I was just rolling along and listening to music when I noticed Marvin Fisher from Hendersonville waiting for me beside the road. He wanted to know about the trip and told me that his daughter owns the Esmerelda Lodge and Restaurant near Bat Cave and he does some work for her. The Esmeralda property was very impressive.

I continued on into Chimney Rock with a room already booked and plans to climb Chimney Rock. I chose the Rock first and noticed that walkers and cyclists were not welcome on the road up but I wanted to go anyway. The sign said, “One mile to information and tickets.” But a carload of great folks stopped me on their way down to tell me that it was three miles to the top and the elevator was not working for the final ascent. Pushed to get some other things done and knowing that walkers weren’t allowed, I headed back down to find my room and also to stop at a bakery. Oatmeal cookies and yogurt picked me up and I found the room quickly. What I didn’t find there was working Wi-Fi and neither my cellphone nor iPad had a decent signal. It seemed like the south end of the Chimney Rock village was in a dead zone. With that, I changed to another place with good Wi-Fi and a balcony looking over the Broad River.

Once in the room at the Riverside Lodge, I could send my story and photos while listening to the Davidson Wildcats basketball game. The view of the river was very pricey but quite nice.

The Chimney Rock Village was quite busy and full of people, which makes the next scenario interesting. On the way into town, at the same time I saw Marvin Fisher, I spoke briefly to Rota Hessenius. Then Rota and husband, Rod, of Fletcher, N.C., and Judy and Clayton Henrichsen of Spencer, Iowa, were in the car that told me how far it was to the top of Chimney Rock. Next, just as I came down, Rod and Clayton were in rocking chairs on Main Street. Finally, as I changed lodging, there they all were again at a gift shop. I bet the group were all tired of seeing me.

So, I wait on the weather. Rain or not, unless it is a brutal downpour, I plan to try to make Rutherfordton tomorrow. More sharp curves and an extreme uphill will come once I pass through Lake Lure. As far as I know, there are no motels between Lake Lure and Rutherfordton so I have to make it. The rain is supposed to continue through Monday morning. I haven’t heard snow mentioned again.

Counting the trip up and down the first mile of the Chimney Rock road, I had 20 miles today. That much or more will be required tomorrow. I will leave very early.

Remember the sponsors who have helped support this trip. The first group of them includes Father and Son Produce, First Baptist of China Grove Men on Missions, Gentle Dental and Tanya Williams, DDS. I couldn’t do this without them.

Hope to see you back here tomorrow. Today’s scenery and people were wonderful, just adding to a great list. As always, thank you for the prayers and support! Warmer weather coming next week.