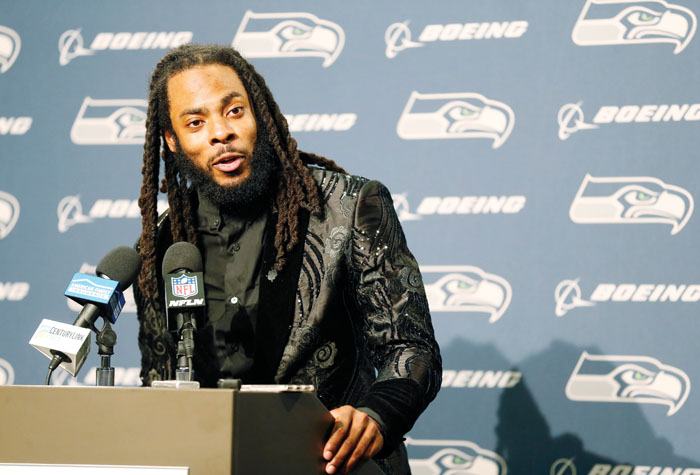 FILE - In this Oct. 29, 2017, file photo, Seattle Seahawks cornerback Richard Sherman talks to reporters during a post-game press conference following an NFL football game against the Houston Texans, in Seattle. The Seahawks are cutting ties with star cornerback Richard Sherman after seven seasons. The team has informed him that he will be released, and Sherman confirmed the decision in a text message to The Associated Press on Friday, March 9, 2018. (AP Photo/Stephen Brashear, File)

By JOSH DUBOW, AP Pro Football Writer
SANTA CLARA, Calif. (AP) — Star cornerback Richard Sherman agreed to a three-year deal with the San Francisco 49ers on Saturday, one day after being released by the rival Seattle Seahawks.
Sherman confirmed in a text message that he agreed to the contract on Saturday after spending the day meeting with the team. ESPN reported that Sherman’s deal is worth up to $39.15 million.
Sherman played an integral role in the fierce NFC West rivalry between Seattle and San Francisco earlier this decade. His deflection on a potential game-winning touchdown pass in the 2013 NFC championship game against the 49ers led to an interception that sent the Seahawks to the Super Bowl, which they won.
Sherman then celebrated a Thanksgiving night win in a road game against the 49ers the following season by eating a turkey leg on the 50-yard line.
Now, the player who was reviled so much by 49ers fans is joining their team after the Seahawks decided he wasn’t worth his $13 million salary for 2018. San Francisco hopes he can make a big impact even as he turns 30 later this month and is coming off an Achilles tendon injury that cost him half of the 2017 season. Sherman also had a cleanup surgery on his opposite ankle during the offseason.
The 49ers had a glaring need at cornerback with 2017 third-round pick Ahkello Witherspoon and slot cornerback K’Waun Williams the only players under contract with extensive experience. The Niners believe Sherman can fill that role in a defense modeled by coordinator Robert Saleh after the one that had so much success in Seattle. Saleh was a former defensive assistant with the Seahawks.
Sherman became a star in Seattle, bringing a brash attitude and willingness to speak out on any topic to go along with his stellar play. His best seasons came in 2013 and 2014, when Seattle made two Super Bowl appearances, and he has 32 interceptions.
Sherman still was one of the better cornerbacks the past three seasons, ranking second in the NFL by allowing just 49.2 percent of passes against him to be caught, according to Pro Football Focus.
Sherman played his college ball in the Bay Area at Stanford under former coach Jim Harbaugh, who then went up against Sherman during his four seasons in charge of the 49ers.
Niners general manager John Lynch is also a Stanford alum and tweeted out a photo with Sherman.
___
AP Sports Writer Tim Booth contributed to this report.
___
More AP NFL: https://pro32.ap.org and https://twitter.com/AP_NFL