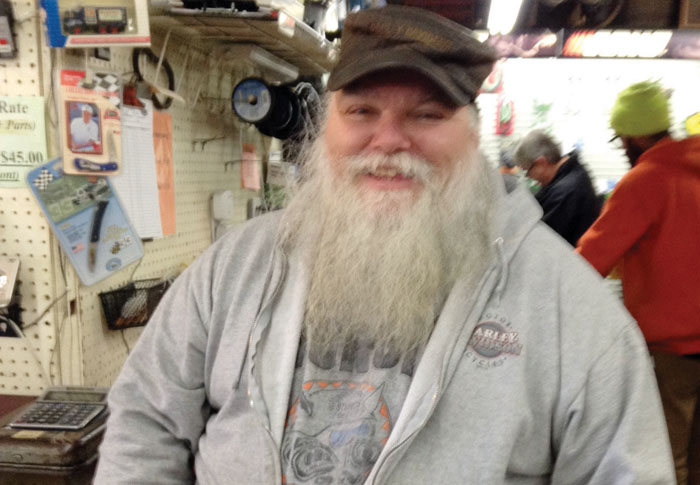 David Ward was an interesting guy who gave me some directions and what to expect ahead is afternoon. He was in Horse Shoe around noon. David Freeze/for the Salisbury Post

For the past few days, rain and possible snow have been a regular source of conversation on TV and also with the locals I have met.

Friday evening, weather forecasters were pretty sure that there will be some snow but plenty of rain for this afternoon through Monday morning. That has been hanging heavy in my thoughts, but it didn’t take away from another good day Friday.

The temperature was 22 at 5:45 a.m. in Brevard and actually dropped to 19, according to one report. I didn’t have any Hot Hands packets left so I tried putting on vinyl gloves and then my mittens over the top. Once my hands started sweating, the water became very cold. I didn’t get the hoped for results.

With not much wind early and only moderate traffic, I made good progress from the Sunset Motel on sidewalks and a bike path/greenway until out of Brevard, where I found wide shoulders through Etowah and on to Horse Shoe.

Then things changed as there was suddenly no shoulder at all for the last six or so miles into Hendersonville. Great sidewalks were in place in Hendersonville, finally making it easy to close out the day’s journey.

Some interesting people came my way Friday, although not a single one in the morning. I saw a hardware store about noon and went in search of some Hot Hands. Not only did they have a few, but I got to meet David Ward, president of the motorcycle ministry for Western North Carolina.

Ward told me about an upcoming bike shop and about what to expect on U.S. 64 to Hendersonville. He said something like, “This is a terrible road!” And I wondered what he meant because I had those wide shoulders all the way from Brevard.

Ward was a light-hearted good guy who genuinely enjoyed helping me.

What I found headed out of Horse Shoe was a white line that often led to a ditch. There were no shoulders at all, meaning that I had to keep the baby jogger balanced with one wheel on the edge of the white line and the other in a ditch or sometimes on rough ground. That was the hardest six miles of the trip because the traffic was very heavy. This will be good practice for today’s adventure.

Once in Brevard, I jumped on those sidewalks and found the bike shop in downtown, just a couple of blocks off U.S. 64. I called ahead and told what had happened and was advised, “Bring it on over. I am on Church Street.”

I found the Bicycle Co. and owner Michael Robinson, who went right to work. In five minutes, my own cyclometer and a new magnet were working well. Michael was so nice and only charged me a dollar. It was only about two miles to the motel, but it worked fine the rest of the way. Michael will get a book in the mail.

I walked to the downtown on U.S. 64 and Main Street. DeDe Walton and Ginger Fisher, both of Hendersonville, stopped by to ask about my trip. They were so positive and fun to talk to, plus they told me to enjoy their town. It had been a long day, especially with the traffic challenges, as I totaled 24 miles.

Walton and Fisher, along with Robinson and Ward before, simply brightened my day.

I stayed in a small Days Inn next to Interstate 26.

The weekend is filled with uncertainty. I will head for Chimney Rock and Lake Lure today. The road in that area will be challenging, and I have been dreading it since I decided to make the trip off Ed Dupree’s suggestion. There is simply no place for a baby jogger. Hopefully the bad weather will make weekend traffic lighter than usual.

The side of the road yielded three dimes Friday, netting a total of 55 cents for the week that will help with some of my expenses.

Speaking of that, Dick Richards and his wife have decided to sponsor me this year. I met Dick because of the bike rides and have stayed in touch each year.

Allison Dupree reports that she thinks her dad would have loved this trip. “It was probably his only regret that he didn’t get to do it,” she said. I feel like he is right here with me and think of him often.

Join me tomorrow for an update on what will be another challenging day. As always, I am certainly glad that all of you are along for the fun.