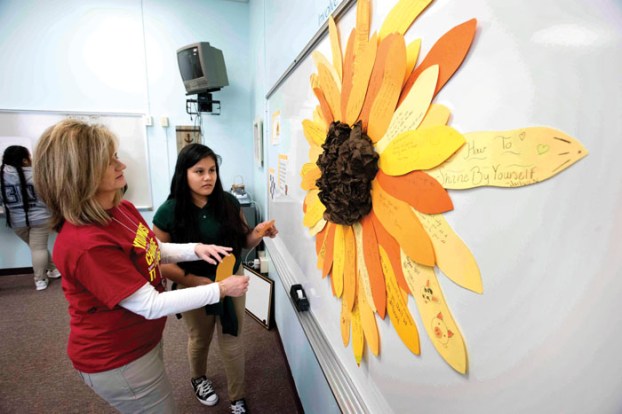 Students learn about the Holocaust through annual conference

LANDIS — More than 1,400 students from every seventh grade in the Rowan-Salisbury school system descended upon Corriher-Lipe Middle School on Thursday for the second annual Holocaust and World War II Humanities Conference.

“This was a good learning experience,” said Natavia Reid, 13, a student from West Rowan Middle School.

She was especially interested in the life of Suly Chekin, a Holocaust survivor from Lithuania.

Natavia said she had never had an opportunity to hear a Holocaust survivor’s story. She and her classmates were creating Kindness Rocks to spread happiness and promote anti-bullying.

He read the book “Project 1065” and discussed what students would do in that situation.

“It was good. It talked about spies,” Bobby said, his eyes lighting up.

The book is about an Irish child who pretends to be a Nazi to help his mother, who is a spy.

“We were really excited that we were able to host all seventh-graders from the district as well as some students from Kannapolis Middle,” said Cheryl Lange, the media center coordinator and co-organizer of the conference.

“Our partnership with Talli Dippold and the Greenspon Center for Peace and Social Justice has been phenomenal in helping us network with presenters around the Charlotte area. This year, we were also able to host sessions sponsored by the UNC-Chapel Hill American Indian Center and Western Carolina University. For our second event, the growth in interest, attendance and representation has been tremendous,” Lange said.

Last year, there were 20 sessions. This year, organizers were able to double that.

“Mrs. Lange and I worked really hard to get as many different speakers with as many different topics as we could to really broaden WWII and the Holocaust for the students,” said teacher Kendall Shue, the co-organizer. “We were also excited to have as many local presenters as we did. The Rowan County community really stepped up to help with this event. We did this for our students, so that they could understand more in depth the importance of the time period and how it has shaped the modern world.”

Shue has studied teaching about the Holocaust at the U.S. Holocaust Memorial Museum’s Belfer National Conference for Educators. Lange is a Holocaust educator who works frequently with the N.C. Holocaust Council.

The two main speakers were author Alan Gratz and Suly Chenkin, a child survivor of the Holocaust from Kovno, Lithuania. Gratz wrote the book “Prisoner B-3087.”

The all-day conference featured discussions about hatred and intolerance as well as Jewish life, American veterans, life in a concentration camp, and stories of people who were instrumental during the Holocaust.

Chenkin said her main goal was to make students aware that this is something that can happen to anybody who is a minority.

Rachel Oestreicher Bernheim, a Salisbury native and chairwoman of the Raoul Wallenberg Committee of the United States, a human rights organization in New York, was also a presenter.

Bernheim said many of the students had never heard of Raoul Wallenberg. She said Wallenberg’s legacy is important because he saved more than 100,000 Jewish people from the hands of the Nazis without resorting to violence.

“It is a gift. I’m so awed by this program that has been set up for the students. It’s so important the way our country is evolving,” she said.

SALISBURY — The families of Justin Monroe and Victor Isler, two firefighters who died while battling a 2008 fire at... read more