David Freeze: Walking toward the sunshine 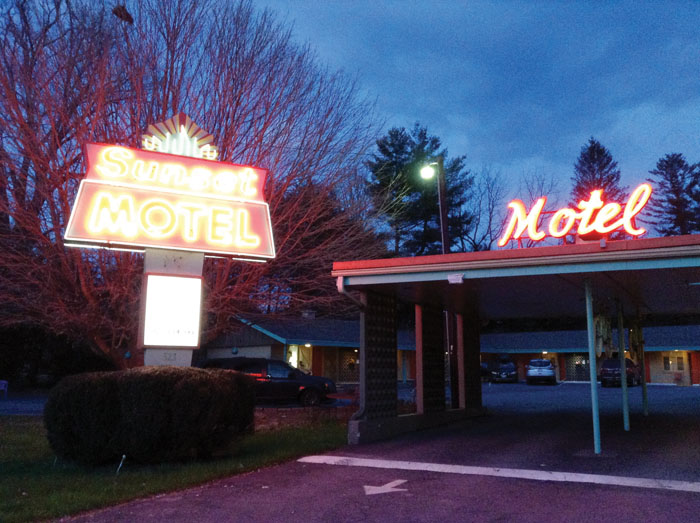 This is the neon sign at the Sunset Hotel in Brevard, my home for Thursday night. David Freeze/for the Salisbury Post

It was not quite as cold Thursday morning as expected. I found a clear sky when I hit the road in Sapphire. Only a light breeze was blowing, so the temperature of 26 didn’t feel so bad.

Once the sun started to rise over the mountains, I quickly discovered that the sunny places were the most comfortable. I passed up making my own breakfast at the Brook Trout Inn with everything provided just to get on the road earlier.

As I headed east, there was usually no road shoulder, which was fine until a long convoy of cars and trucks would meet me. The usual was five minutes of almost nonexistent traffic and then a mad rush that forced me into the ditch.

This went on for an hour or more until I reached a massive road construction project where I later learned that U.S. 64 was being straightened. Flagmen were holding up traffic and then releasing it all at once, forming the convoy that probably had plenty of drivers in a hurry for work.

Two interesting conversations happened during this period. I got stopped yet again, this time by Lake Toxaway security guard Mike West. He said his office received a call that I was walking a baby carriage and the baby and I had to be cold. Once again, I flipped back the top cover and showed that there is no baby. I told West what I was doing and I was fine, and he communicated that to someone who sounded like a dispatcher.

While l was walking through the construction, I knew what all the dump trucks seen over the last two days had been doing. They were being loaded quickly with the dirt from one huge hill and sent away. Thankfully, there were no issues as they let me go past without anything more than several “good mornings.”

The last flagman was Sadiq Harris. We talked quite a bit as he was curious about why anyone would walk/run across the state. He was a fun guy and quite pleasant while working on a cold morning.

I passed Rosman, which I think consisted of a country trading post and a touristy gem mine. Very soon, two wonderful things happened. I got great road shoulders, and flurries started to fall. The snow lasted for only 10 minutes, some of it while the sun was shining. Very soon, the wind picked up and probably topped out at 15 to 25 mph.

There was a historical marker in the area that mentioned a NASA tracking station that functioned nearby from 1982 to 1995.

The next highlight was a stop at Dollar General for radio batteries and Reese’s Cups. With my new batteries allowing good reception and my stride powered by the peanut butter and chocolate, the pace picked up and so did the singing. I truly was “walking toward the sunshine” and realized how much fun this day was.

Just before I reached Brevard, Daniel and Dee Nunnaley stopped to talk. Daniel had seen me earlier in the morning and was the third person of the day to ask if I needed a ride. He and Dee live in Cashiers. They were on the way to Morganton, and I told them I was too but that the only way was on my own two feet.

Finally, after 21 miles, I arrived in Brevard where my home for the night would be the Sunset Motel, a Route 66-style makeover with a neon sign that I couldn’t wait to see. Lori and Elizabeth gave me a great rate and room, plus tried to help me get a cyclometer Thursday afternoon. It just didn’t work out, but I will get one soon.

Today will include another cold trek to Hendersonville and possibly a little beyond. The forecast is for rain this weekend, so I need a good day today. The soreness in my legs is getting much better and good nights of sleep recently have helped with that.

One thing I need to add is that Don Vick from the Candy Shoppe downtown reported that he has been carrying Twin Bing candy bars for a long time, even before my northwest bike ride last summer. Don is a valued friend from the Salisbury Rowan Runners.

With that, I will close for another busy day. Thanks for the support from everyone, by email and text.

Thursday finished Day 6, probably a little less than 25 percent of the whole journey. I certainly hope you enjoy it as much as I am.