David Freeze: A tough day with snow, wind and plenty of dump trucks 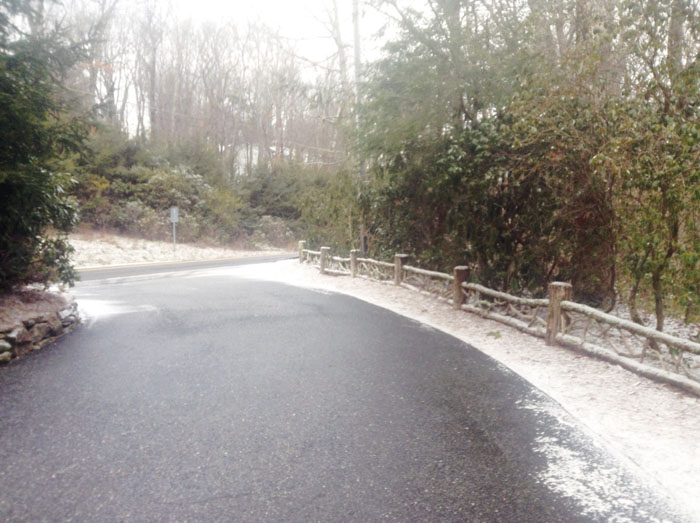 Snow and 26-degree temperatures made for slick roads Wednesday between Highlands and Sapphire. More snow and even colder temps are predicted for today. David Freeze/for the SalisburyPost

Forecasts called for snow above 3,500 feet in elevation Wednesday, and I was at just over 4,300 feet at Highlands.

Still, I was surprised to see snow already on the ground at first light. The early temperature was 30 but dropped to 26 during the heaviest snow, which fell between 7 and 9 a.m.

The roads were so slick that I lost my footing often but didn’t fall in the morning.

Highlands had a lot of traffic leaving toward the east. Three people offered a ride, and one offered that he didn’t like what I was doing and that I should get out of the road and onto the sidewalks. It was the first time that I have been mad on the trip and let him have more than I should, especially since there were no sidewalks.

This encounter is especially important for what happened much later in the morning.

U.S. 64 had some infrequent spells of having enough road shoulder for me to walk on. Otherwise, I crossed back and forth across the road to find the widest spot. That worked pretty well, especially after the snow stopped and the sky cleared somewhat.

I was 11 miles from Highlands to Cashiers and had made decent time considering the weather.

Just before entering downtown Cashiers, I was pulled over again by a deputy sheriff. This time it wasn’t about a baby but was even more humorous. Someone had reported what looked like a homeless person in a yellow jacket pushing a shopping cart down the highway.

Maybe it had to do with the plastic bags that I had over my mittens.

Sgt. Blake Watson was friendly as could be as he related why he stopped me. I told him about what I was doing, where I had started and where I planned to end. He had a Western Carolina University sticker on his car, and I suspect was a graduate there. That was my first college, but then ended up at Catawba and Pfeiffer.

Sgt. Watson and I made two of the worst selfies ever, only because I was bundled up and could hardly see out.

After stopping at the BP in Cashiers, I got two great egg and cheese biscuits for the first time on the trip. I headed east toward Sapphire and was actually stopped to give directions.

Amazingly, I knew the answer when the young woman asked where the nearest Ingles grocery store is located. It just so happened to be on U.S. 64, just where I passed it when leaving Cashiers.

The only bad thing of the day happened to my cyclometer or jogomometer. I noticed it quit recording distance at 2.3 miles and found that the magnet that rides on the spoke to flash by and signify the pace was gone. So now, I have no way to record my miles other than road distance signs which I used today to prove that I did 22 miles.

This was actually an “early off the road” day. I typed my story while waiting in the Big Trout Inn for the owner to return. I was in Sapphire, which is the best point to let me make a run at Brevard or even Hendersonville today. I will get some details later and have a better plan.

The only stores in Sapphire are a new Dollar General, a BP country store and a hardware store. I later headed to the country store for food although I was not particularly hungry Wednesday night.

Another sponsor just signed on again. Vac and Dash from Albemarle prints nearly all of Rowan’s race shirts. Peter Asciutto, the owner, let me know this morning that he couldn’t pass up another adventure.

Bitter cold is coming in this morning with another chance of snow, although my elevation decreased by about 1,000 feet Wednesday. It’s supposed to be in the low 20s with a 30- to 35-mph wind to start. As a tailwind, I can stand it. I even had some Hot Hands warmers along and used the first pack Wednesday morning.

I mentioned that I didn’t fall this morning on the slick roads. However, I did trip big time over a root when I hit the woods for a bathroom break. Smacked my head on the ground pretty good, but all is well.

The best event of the day was when I met Ann and Bill Braman as I waited to check in. I told them about my journey, and Bill took me down to the nearest store for some supper items. Bill and Ann are from Traverse City, Michigan, and just Wednesday committed to buy a house near Sapphire close to where I spent the night.

Thanks, Bill, for buying that food too. Just another wonderful example of the fine people that I meet on these adventures.

See you tomorrow after another adventure in the cold.