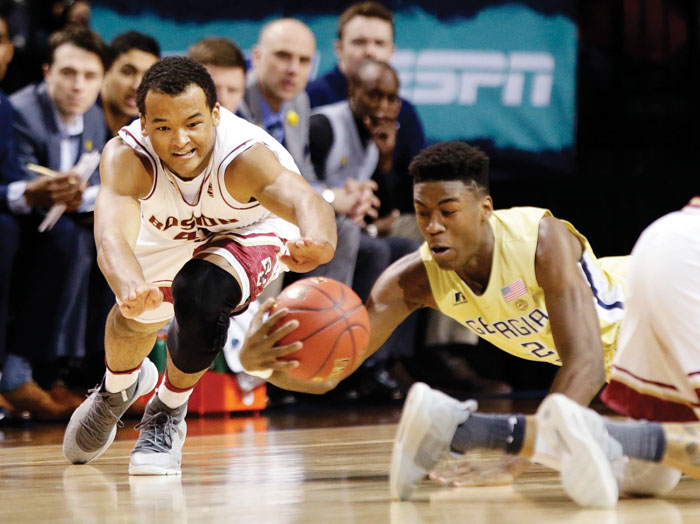 Georgia Tech's Moses Wright (12) and Boston College's Steffon Mitchell (41) fight for control of the ball during the first half of an NCAA college basketball game in the first round of the Atlantic Coast Conference tournament Tuesday, March 6, 2018, in New York. (AP Photo/Frank Franklin II)

NEW YORK (AP) — Following its first winning season in seven years, Boston College has a chance to make some noise in March.

Ky Bowman had 26 points, 10 rebounds and six assists to lead the Eagles over Georgia Tech 87-77 on Tuesday in the opening game of the Atlantic Coast Conference Tournament.

Sophomore forward Nik Popovic scored a career-high 20 points and Jerome Robinson, runner-up for ACC player of the year, added 19 for Boston College. Despite going 2 for 14 from 3-point range, the Eagles never trailed and were in control throughout against a banged-up Georgia Tech team that struggled to score all season.

With the league holding its postseason showcase in Brooklyn for the second consecutive year, a sparse crowd was on hand to see the 12th-seeded Eagles (18-14) advance to play No. 5 seed North Carolina State on Wednesday.

“My preparation probably begins in about 20 seconds,” BC coach Jim Christian said. “But this is an important time to enjoy. I want these guys to enjoy it, and then we’ll start getting ready right away.”

Tadric Jackson scored 23 of his 29 points in the second half for the 13th-seeded Yellow Jackets (13-19), who won their final two regular-season games after losing seven straight and 11 of 12.

“We’ve got a really good nucleus coming back,” coach Josh Pastner said, “and we have a good recruiting class coming in.”

Jordan Chatman chipped in with 13 points for the Eagles, who had lost four of five.

Boston College’s last three ACC Tournament wins have come against Georgia Tech. The previous two were in 2015 and 2012.

After trailing by 10 at halftime, Georgia Tech missed its first nine field-goal attempts in the second half and the Eagles opened their largest lead, 51-31, on Bowman’s three-point play with 13:37 remaining.

The pressing Yellow Jackets forced a flurry of late turnovers and cut the margin to six with 45 seconds left, but Boston College closed it out at the free-throw line.

“We just dug ourselves in a little bit too deep of a hole,” Pastner said.

BC seized control with an early 9-0 run and went into halftime with a 36-26 cushion. Lammers led all scorers with 11 points in the half.

Georgia Tech: Freshman point guard Jose Alvarado was unable to play in his return home to Brooklyn. Alvarado started the team’s first 25 games but his season ended Feb. 11 when he dislocated his elbow in a loss to Duke. “It’s a recipe for disaster to play in the ACC without a point guard,” Pastner said. … Jackson, who fouled out in the final minute, matched his career high for points, set against Boston College last season. … Lammers, a first-team All-ACC selection in the preseason, blocked four shots to finish his college career ranked third in school history with 254 blocks and 10th in rebounds with 774. … Boston College won the only regular-season meeting this year, 80-72 in overtime at home on Feb. 4.

Boston College: Leading rebounder Steffon Mitchell (7.9 rpg) was back in the starting lineup after sitting out the regular-season finale Saturday at Florida State with a hamstring injury. Mitchell grabbed a game-high 11 boards in 37 minutes. … Reserve forward Luka Kraljevic did not play after sustaining a head injury at FSU. … BC scored its most points in an ACC Tournament game. … Bowman played all 40 minutes and shot 8 for 13 but committed eight turnovers.

Bowman injured his right knee during the first half of BC’s opening-round loss to Wake Forest in last year’s tournament. He returned to the bench using crutches that day and watched the rest of the second half wearing a large brace on his leg. “I knew my opportunity was going to come around again,” Bowman said. “So just being able to come here again and play again was a great feeling for me.”

Georgia Tech: Lammers and Jackson are gone next season, but the Yellow Jackets look forward to getting a healthy Alvarado back along with fellow freshman Curtis Haywood II (stress reaction in right leg). They could team with Okogie to form a solid backcourt.