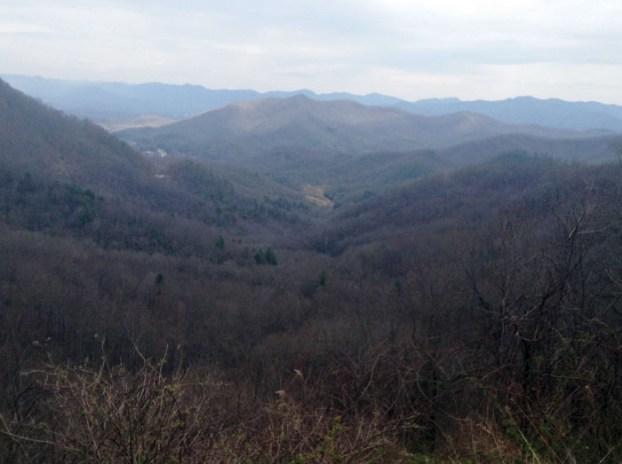 With the forecast for rain Monday night and today, my thoughts had focused on getting to Franklin on Monday. I was excited that the jogomometer seemed ready to go and I could track my own mileage.

Good thing, because the mile markers from the first day’s ride to Murphy have long since disappeared. Monday was chilly at the start, about 33 at 6 a.m.

The motel manager at the Lake Chatuge Inn told me it was 34 miles to Franklin from my front door. Two things happened quickly. I found a quarter and got a magnificent sunrise but no clear shot to take a photo of it.

Early on, there was little traffic, and I still had the rumble strips but often could put the baby jogger in the road for easier riding.

I entered Nantahala National Forest and began climbing on a newly paved road, my favorite kind. Traffic became even lighter, and I made good time going up the long climb. It topped on Winding Stair Gap at 3,820 feet, up from about 1,100 near Lake Chatuge where I started.

Often during the climb, I thought of how nice this route would be for a bike ride. The scenery was spectacular at times, especially near the top and on the initial decline.

Thinking I had plenty of time, I started shopping for motels. I needed one with a good rate because I had paid too much for the first two nights. It is great fun to find a good motel for an even better price. The Sunset Motel in Murphy had been great, but still I probably paid too much.

Monday night, I got a good price but not quite the quality. Still, it was late when I got here because the motel manager and I could hardly understand each other. After getting lost, I found the place in the dark.

I had 40 miles for the day, an incredible number, but more than 2 of that was a product of being lost. It was more than 35 miles to the Franklin sign, but the motels were on the other side of town. At least I was inside should the rain come.

I did get to see the downtown in the dark but may see it again today going back to U.S. 64. Franklin is known as an Appalachian Trail friendly town because the trail crosses nearby, once near the Winding Stair Gap summit. Famous for its gems and minerals, the locals call Franklin the “Gem Capital of the World.” The town has about 4,000 residents.

At daybreak, I will head for Highlands if weather permits. Cashiers will be next while continuing to follow U.S. 64.

Another returning sponsor for this year is Dr. Tanya Williams. She is my dentist and owns Gentle Dental across from the Rowan County building downtown. New this year is Ralph Baker Shoes. Ralph Jr. has been doing a great job fitting local runners.

I didn’t have a conversation with anyone Monday until I got to the motel. Hopefully, there will be conversations with some of the locals today.