Running across the state: Day one makes for an interesting start to long journey 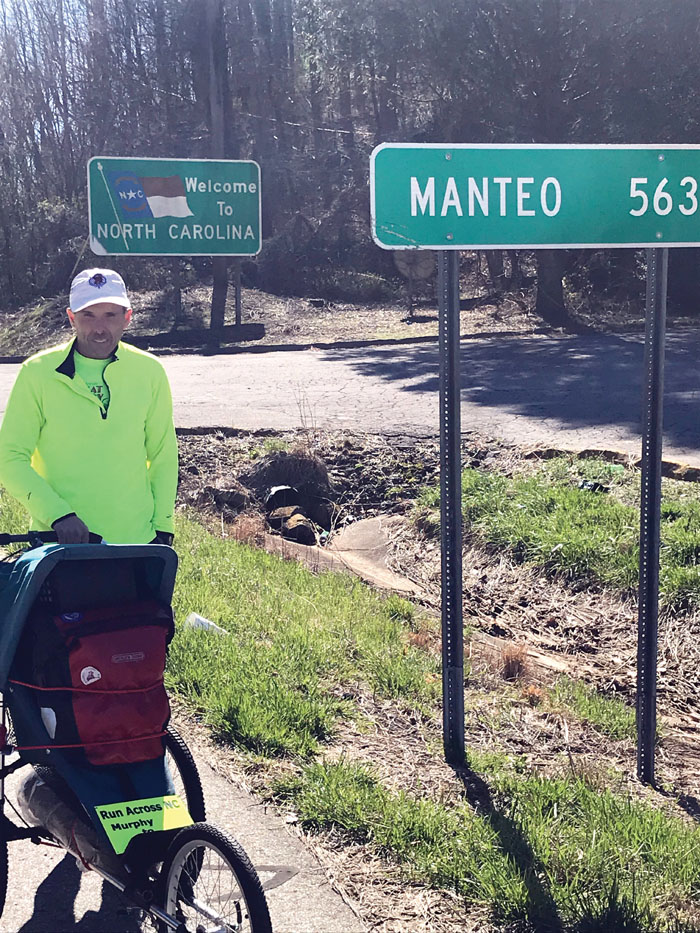 Photo by Amber Freeze David Freeze poses at the North Carolina/Tennessee border at the start of his journey. He is running across the state.

It has been a long day that started with a four-hour drive to the Tennessee state line, just west of Murphy. My daughter Amber and her fiancée Jamie Bishop were nice enough to spend a good bit of their Saturday dropping me as far west as possible in North Carolina. We had a good time on the ride up but I think a certain heaviness clouded our discussion because of the unknown.

We arrived at the state line, unloaded the baby jogger and my bags, then made a few pictures. We shared a prayer together and the journey began at about 11:20 a.m. My goal was to make it to Murphy to spend the night although I didn’t have a confirmed room. This portion of N.C. 64 is quite hilly and I found the first 14 miles of the journey difficult because of rumble strips butting up to the white line which made it hard to push the baby jogger and run. Traffic was not heavy until I actually neared Murphy, just about the same time that the rumble strips stopped. I was toast by then but kept pushing and running when I could and walking when I couldn’t.

As usual, interesting things started happening quite early. Less than 10 miles from the starting point, a sheriff’s deputy pulled over in front of me and waited until I got to his car. Seems someone driving by had been concerned about me pushing a baby against traffic. I showed Deputy Todd Abshier that I was on a serious journey without a baby and we had a nice conversation afterwards. I noticed a few people looked quite shocked to see the baby jogger but they also should have seen that there was no room for a baby. Deputy Abshier and I talked about his upcoming trip out west and a few other things. He was just doing his job and doing it well in my opinion. I later saw him ride by again and we both waved.

One of the subjects that I talked about with the deputy was the availability of reasonably priced motels in Murphy. I got some advice from him and had a plan until my phone rang. I had called the Sunset Motel the previous night and spoke to Ashley Canning who had a nearly full motel but we agreed to touch base early this afternoon. She called and had a cancellation in the right size room, easing my worries for the evening. The Sunset Motel is a recently remodeled old-style hotel that looks wonderful. There is even a breakfast basket already in the room. Ashley got me her last room because she followed through, so I am off to a good start.

Murphy is very interesting with a vibrant downtown. It certainly is a charming place in Cherokee County. The Hiawassee and Valley rivers are both local attractions. Just prior to the Trail of Tears, the Cherokee were gathered at Fort Butler in Murphy.

Rooms for the next few nights are going to be hard to come by, especially with poor cell coverage. Today’s weather was near perfect with a significant tailwind, another of my favorite words.

I will continue east on N.C. 64 for the next several days, probably all the way to Morgantown eventually. Tomorrow, the first goal is Hayesville and I will see what develops afterwards.

The first two sponsors for this latest adventure are Father and Son Produce in Salisbury and the First Baptist Church Men on Missions from China Grove. Father and Son owners Tim and Linda Hoffner are about to put in ice cream and still are the only store locally carrying my favorite Twin Bing candy bars. The Men on Missions continue to serve the community with various projects that are much needed. Both sponsors are retuning and very much appreciated.

Right now, I am a little stiff and more tired than usual after 22 miles on the first day.
Hope to see you back here tomorrow and thanks for joining me again.