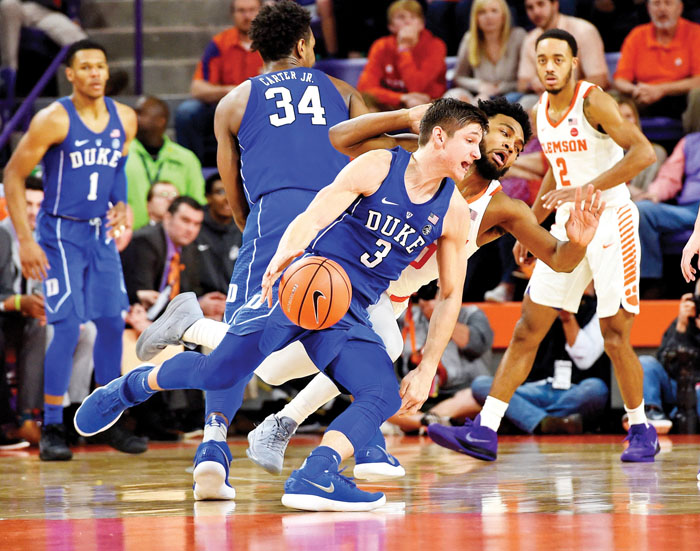 CLEMSON, S.C. (AP) — Duke coach Mike Krzyzewski has gotten more than he’s expected out of the Blue Devils the past couple of weeks with Marvin Bagley III out. And he’s certain it will pay dividends down the stretch once Duke’s leading scorer and rebounder returns.

Gary Trent Jr. hit three foul shots with 1:31 left to put No. 12 Duke ahead for good, and the Blue Devils won their third straight with Bagley on the sidelines, 66-57 over 11th-ranked Clemson on Sunday.

“For us, that’s three wins with arguably as talented a kid as there is in the country out,” Kzyzewski said.

Krzyzewski said Bagley’s right knee sprain is improving. The coach said it’s unsure when Bagley will be back, but “it’ll be soon.”

That won’t be good news for Duke’s opponents down the stretch, especially if the Blue Devils show the toughness they displayed at Clemson.

The Blue Devils gave up all of their 10-point lead over a six-minute stretch when the Tigers tied it at 57 on David Skara’s jumper. That’s when Trent was off the mark on his 3 from the right corner, but got fouled by Clemson reserve Scott Spencer.

Trent’s first shot rattled around before falling through and he swished the next two for Duke (22-5, 10-4 Atlantic Coast Conference). The Blue Devils outscored the Tigers 9-0 the final 90 seconds.

Wendell Carter Jr. followed Trent’s foul shots with an inside bucket, and the Tigers (20-6, 9-5) could not respond in losing for the first time at home this season.

“Some of these young guys grew up a little bit today,” Kzyzewski said.

Grayson Allen had 19 points for Duke, all but two in the opening half. Carter had 15 points and 10 rebounds while Trevon Duval had 12 and Trent scored 11.

Marcquise Reed and Elijah Thomas led Clemson with 13 points apiece. Thomas also had 15 rebounds for his seventh double-double of the year.

The Tigers were also without one of their starters in point guard Shelton Mitchell, who suffered a concussion in a loss to Florida State this past Wednesday night. Clemson coach Brad Brownell said Mitchell’s absence might have disrupted the team’s rhythm, but not enough that the starting backcourt in Reed and Gabe DeVoe should have gone a combined 4 of 24 shooting. Their 16 points combined were 13 fewer than their average this season.

It was the first time the Tigers had lost consecutive games this season.

Duke: The Blue Devils struggled to shoot against Clemson’s defense, which ranks fifth in the ACC. But Duke made hay at the foul line, making 11 of 12 free throws in the opening half to keep in front. Without Bagley, Allen took charge early with 17 points off two 3-pointers and keyed the Blue Devils’ defense with two steals.

Clemson: The Tigers were out of sync early on without Mitchell, who had started all 25 games at point guard before Sunday. Clemson brought the ball up gradually with long, cross-court passes before Duke got wise and picked off several passes for easy baskets. The Tigers will have to devise a better plan if they hope to finish off a strong season with success.

Clemson had a run of five straight games with 10 or more 3-pointers end against Duke on Sunday. The Tigers went just 5 of 20 from behind the arc with two of their leading outside shooters, Marcquise Reed and Gabe DeVoe, going 2 of 14.

Allen has stepped up his game since Bagley’s injury. Allen combined for 39 points in the four games before Bagley got hurt. He’s averaged 22 points in Duke’s past three contests. Allen also had four assists and four of Duke’s 10 steals against Clemson.

Duke starts a two-game homestand against Louisville on Wednesday night.