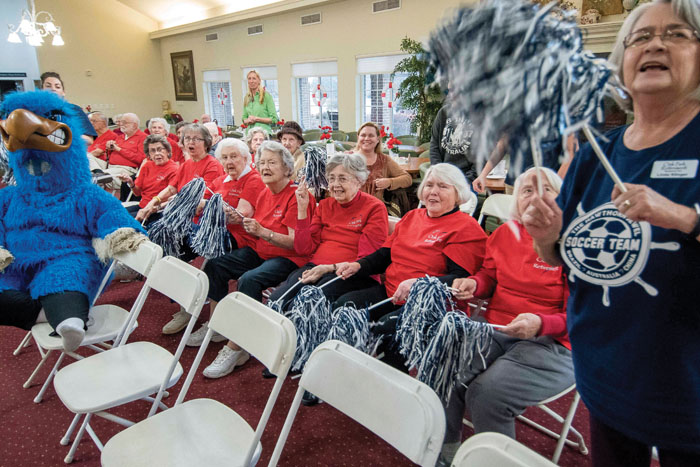 JON C. LAKEY / SALISBURY POST Oak Park cheerleaders cheer on the home team. Oak Park Retirement invited the Catawba College men's soccer team over to their home field for couple of short games. The tables in the dining room were cleared away to make room for the taped off field with goals, team areas and a cheerleading section. Tuesday, February 13, 2018, in Salisbury, N.C.

That’s just what Oak Park Retirement residents are doing this winter while learning about the food, history, culture and music of the many ports along the way.

Oak Park resident Cora Kirkman, age 95 and originally from Brazil, was consulted on the logistics of the trip.

As World Cup games go, Oak Park seemed just a little more prepared than the Catawba team. WSAT radio host Buddy Poole was along to call the game over the radio while the Oak Park cheerleaders, band and Eagle mascot cheered the team on.

After an early round of warmups and stretching headed by Cory Lail of Pivot Physical Therapy, the team members returned to the locker room to “get their heads right,” according to Karen Leonard, Oak Park activities director.

Catawba’s team looked a bit overwhelmed even during introductions as a large crowd of supporters cheered Oak Park vigorously and occasionally heckled Catawba.

The rules called for five players per team on the field and two 10-minute periods of play. Led by Jean Redding and the power kicks of Maurine Gminder, Oak Park pulled away from the start behind a relentless offensive surge and cruised to a halftime lead of 7-3.

Looking shocked, Catawba coach Ken Hassler tried to make adjustments and regroup his team. With their youthful energy, the college players closed the gap to 10-8 in the second half before Oak Park went on a 4-1 run down the stretch to lock up a 13-8 win.

Oak Park spectators politely cheered the Catawba team, much different than their in-game chants of “Are they too much to handle?” and “Kick ’em in the shins, Diane.”

Perhaps the most hurtful of all came late in the game as the cheerleaders led several rounds of “Look at the scoreboard and see who’s behind!”

At least one Catawba player was wrestled off the playing field by Oak Park supporter and Hawthorn Regional Director Jim Maddux, who said, “Gotta help our folks out; the ref’s blind.”

Championship medals were awarded to both teams and they later enjoyed the delights of the World Cup Brazil concession stand.

Oak Park cheerleader Carolyn Kirkman might have been a little biased as she commented on the game afterward.

“The game was a little one-sided,” Kirkman said. “I thought Catawba would be a little better than they were. We did our best to let them score a few goals just to keep it close.”

“This gives us a chance to serve the community,” said Sagaon-Lozado. “I have recently been called to the ministry, which made being here today even more wonderful.”

Oak Park’s coaching staff downplayed their value to the team. JON C. LAKEY / SALISBURY POST Oak Park Retirement invited the Catawba College men’s soccer team over to their home field for couple of short games. The tables in the dining room were cleared away to make room for the taped off field with goals, team areas and a cheerleading section. Tuesday, February 13, 2018, in Salisbury, N.C.

“I didn’t have much to do with it,” said Moir, 94. “I know nothing about soccer and was just glad the referee didn’t give me a technical foul or two.”

The players and coaches enjoyed a post-game meal together.

“We started to get to know the residents when we came over to practice with them,” said Catawba coach Hassler. “This was a fun time. When you gather people around ball on a playing field, it doesn’t take long for people to start to smile. I was proud to see the interaction, the conversation and the laughter among our players and the residents here.”

“Shore excursions” in Brazil included a stop at a rain forest, a Samba dance and chances to sample the local cuisine, including fish and chips, nachos and sausage, fresh fruit and feijoada black bean stew.

Later cruise ship ports of call will include Nepal, where residents will climb Mount Everest.

Hassler didn’t seem troubled by his team’s performance but quietly approached Leonard about a future rematch. “We’ll go back and work on some things and get them to play on our field the next time.”