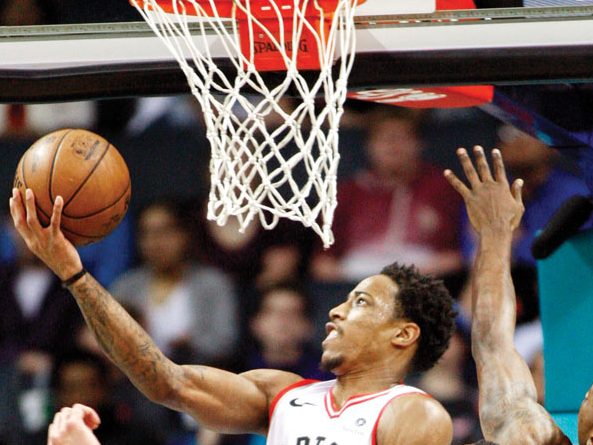 DeMar DeRozan scored 36 for the Bulls in the romp over the Hornets on Wednesday night. (AP File Photo/Nell Redmond)

CHARLOTTE (AP) — Before the season even began, C.J. Miles admitted he and his teammates boasted about just how good his Toronto Raptors’ bench might be.

“We’ve been saying we’re the best bench in the league since Day One,” he said. “And if it wasn’t true then, it’s got to be true now.”

Miles led the charge of Toronto reserves Sunday as he scored 24 points while starter DeMar DeRozan had 25 points and eight assists as the Raptors routed the Charlotte Hornets 123-103.

Six players scored in double figures for the Raptors, who won their fifth straight game and improved to 39-16. Raptors coach Dwane Casey earned his 300th victory as head coach of the team.

Miles shot 6-of-9 from 3-point range as Toronto sank 48.6 percent from long-distance overall.

He led a charge of Raptors reserves who outscored the Hornets’ bench players 55-46.

“They’re phenomenal,” Raptors guard Kyle Lowry said. “Our young guys are phenomenal and we really need them. We love continuing to see them grow. They’re growing and playing well and it makes it unbelievable.”

It was the starters who helped Toronto pull away in the third quarter, though. Jonas Valanciunas, who finished with 21 points and nine rebounds, scored 10 during an 18-2 run that began the second half. Charlotte shot just 1-for-12 in that span.

Fred VanVleet added 10 points and four assists off the bench for Toronto.

“We just got a good chemistry,” Miles said. “We have a lot of fun, play well together. Move the ball. We don’t care who scores, who shoots. We just want to get the shots that guys are supposed to take. That’s all that matters. And it shows.”

Kemba Walker had 23 points and nine assists as the Hornets lost their fourth in a row. Dwight Howard added 17 points and 13 rebounds for Charlotte.

Despite returning Saturday from a West Coast trip featuring four games in six days, the Hornets jumped out to a 10-0 start behind six points and an assist from Walker. Toronto responded with a 12-4 run, with four points and a rebound from DeRozan.

The Hornets’ weary legs showed in the end, as they shot 42.7 percent for the game. The Raptors made 56.3 percent.

“Sometimes they say the schedule can catch up with you,” Hornets coach Steve Clifford said. “It’s not the whole reason we lost, but this last stretch has been a lot of traveling and you can see it.”

Lowry’s 3-pointer with 3:30 remaining in the first quarter gave the Raptors their first lead, which they did not relinquish.

Raptors: Forward OG Anunoby sprained his right ankle in the second quarter and did not return. He played 11 minutes with one rebound and one assist. … Norman Powell started in place of Anunoby in the third quarter. …. Toronto is 3-1 in afternoon starts this season.

Hornets: Center Cody Zeller remains on a minute restriction limiting him to 20-22 minutes the next few games, Clifford said. … Forward Marvin Williams experienced soreness in his left ankle Friday after playing against Utah, but an MRI showed no additional damage, Clifford said. Williams missed four games with the injury, Jan. 31 to Feb. 5. … Walker was honored before the game for setting the record for the most 3-pointers in franchise history. He passed Dell Curry at Phoenix on Feb. 4 when he hit his 930th 3-pointer.

Toronto’s bench ranks near the top in “hustle” categories for the NBA. The Raptors’ bench is first in steals (4.1) and second in blocks (3.1) and turnovers forced (7.2) per game.

“Their activity is just as important as anything else,” Raptors coach Dwane Casey said.

Clifford said he was still trying to learn more about newly acquired center Willy Hernangomez, whom Charlotte acquired Feb. 7 from the New York Knicks for Johnny O’Bryant and second-round picks in 2020 and 2021.

“I have to be honest with you, we made this trade, we played three (games) in four (nights) and I haven’t had a chance to watch the film,” Clifford said. “I’m going to get on that (Monday). He and I are going to work out. I’ve always liked his skill level. He’s a smart player, good size, high IQ. But I haven’t done enough film work.”