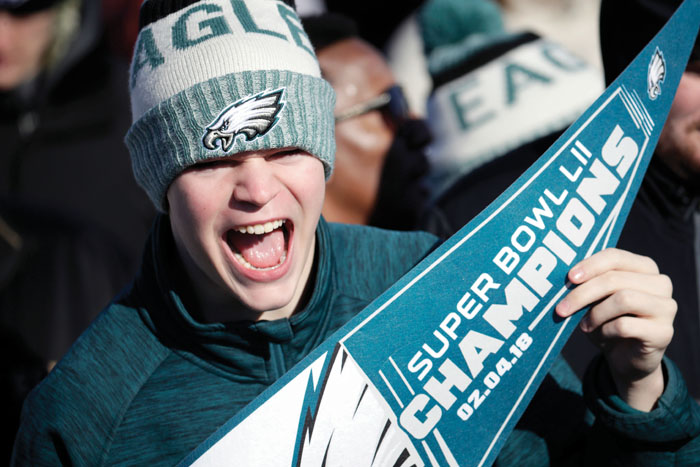 A Philadelphia Eagles fan chants while waiting for the team to arrive at Philadelphia International Airport a day after defeating the New England Patriots in Super Bowl 52 in Minneapolis, Monday, Feb. 5, 2018. (AP Photo/Julio Cortez)

By ANTHONY IZAGUIRRE, Associated Press
PHILADELPHIA (AP) — An estimated 2 million people celebrating the Philadelphia Eagles’ long-awaited first Super Bowl win will descend on the city Thursday as the Vince Lombardi trophy is paraded through five miles of jubilant fans.
Democratic Mayor Jim Kenney called on them to celebrate with passion and pride and warned the small “knucklehead contingent” that caused trouble after Sunday’s 41-33 win over the New England Patriots to stay away.
Officials revealed plans for the parade on Tuesday, saying fans should expect some dramatic surprises, jumbotrons, free subway rides and 850 portable toilets.
Here’s a look at some of the parade details:
___
THE ROUTE
The team will leave the stadium where the Eagles play in south Philadelphia around 11 a.m., head up Broad Street to City Hall, and along the Benjamin Franklin Parkway before ending up at the Philadelphia Museum of Art’s famous “Rocky” steps.
Fourteen jumbotron screens will dot the route to ensure that revelers don’t miss any of the festivities. Revelers will be entitled to one free Bud Light at about two dozen bars as the beer maker comes through on a promise made to Eagles offensive tackle Lane Johnson before the season.
___
TRANSPORTATION
The Southeastern Pennsylvania Transportation Authority is offering free service on its two major subway lines, while its commuter lines from the suburbs will run only inbound service in the morning.
Kenney warned people not to drive into the city as dozens of streets will be closed and heavy traffic delays are expected. The city will also enforce a long list of temporary parking restrictions and bicycle routes around the parade will also be inaccessible.
___
‘KNUCKLEHEAD CONTINGENT’
Kenney said he expects Thursday morning’s parade crowd to be calmer than the one that included some people who shattered storefront windows, overturned a car, ate horse feces, collapsed a hotel’s awning, hit the city’s police commissioner in the head with a beer bottle, toppled light poles and set off fireworks after the Eagles’ win on Sunday night.
He called that small group of troublemakers “the knucklehead contingent” and told them to stay home. He said alcoholic beverages would be confiscated, but officials didn’t release any details on how they would limit open containers when faced with such a massive crowd.
“I think it will be a different tenor, a different element,” Kenney said without noting the city’s Wing Bowl and Mummers Parade, where it is common for heavy drinking to start before sunrise.
___
For more AP NFL coverage: http://pro32.ap.org and http://twitter.com/AP_NFL