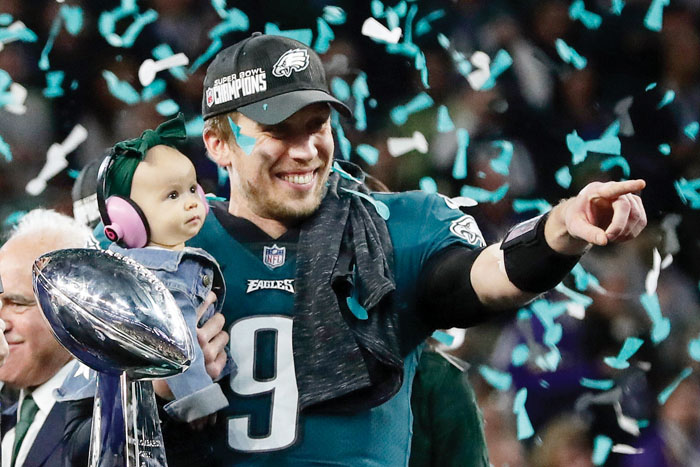 BLOOMINGTON, Minn. (AP) — He has traveled a long road: starter and castoff, journeyman and backup. Now Nick Foles stands at the summit of his sport.

How did it happen? Oh, sure, there was the mid-December injury to rising star Carson Wentz, with Foles stepping in and stepping up. But how, in a breathtaking championship game Sunday night, did this quarterback beat Tom Brady at the five-time Super Bowl winner’s specialty, a shootout?

For Foles — and for his Philadelphia Eagles — there is one underlying theme to it all: perseverance.

“The big thing is don’t be afraid to fail,” Foles, the Super Bowl, MVP, said sleepless hours after he guided the drive of a lifetime for the winning points in a 41-33 victory over league MVP Brady and the defending champion New England Patriots.

“In our society, with (social media) it’s a highlight reel. I think when you have a rough day, you’re feeling you can’t — failure is a part of your life. I wouldn’t be up here if I hadn’t failed a million times.

“You share that. I’m human, not superman. When you struggle in your life, it’s an opportunity to grow. If there’s something going on in your life, embrace it.”

That’s exactly what Foles and coach Doug Pederson said Monday was the approach throughout the 2017 season by the Eagles. They had gone 7-9 the previous year with rookie Wentz as the starter. He improved meteorically this season and was a leading MVP contender before tearing up his knee in Week 14.

That was one of many key injuries the Eagles had to deal with on the way to their first Super Bowl title and the Lombardi Trophy — their first NFL crown since 1960, when they beat coach Vince Lombardi himself and the Green Bay Packers.  Veteran tackle Jason Peters, versatile running back Darren Sproles, specials teams ace Chris Maragos and starting linebacker Jordan Hicks all were lost for the season.

“It’s tough,” said Pederson, whose willingness to stay aggressive was a major reason the Eagles won the NFC East at 13-3, then won three more times in the postseason. “It’s something you spend a lot of time thinking about how you want to talk to the team. Part of it was entrusting the players a little bit, allow them to sort of embrace it and the ‘next man up’ mentality.”

Foles, of course, was the next man behind center. He hardly was a stopgap, though, and Pederson recognized that.

The coach went back to tapes of Foles’ work with the Eagles under Chip Kelly, and then to his games with the Rams and Chiefs. Pederson made some adjustments to fit what made Foles most comfortable — the wheel route to backs and tight ends was particularly effective for Foles — and then turned lose his No. 2 QB.

“It was just a matter of him spending time with the guys, take a lot of repetitions in practice,” Pederson said. “We knew in the building we’d be OK with him.”

OK? Doug, you and the Eagles are NFL champions.

“I think this team is full of great character men,” said Pederson, who was a player and coach for Andy Reid, his mentor, and now, perhaps ironically, has the trophy Reid hadn’t been able to hoist. “The leadership in the locker room — part of the message was putting it back on the players and the players own it. Not having selfish coaches and players gives you a chance to win this game.”

Philadelphia is a young team. Indeed, it might have arrived at the top ahead of schedule. It definitely arrived in a different manner than it expected.

That leaves the question of Foles’ future. He’s under contract for one more year and the Eagles can afford to keep him. Wentz clearly is the franchise QB, though his rehab could make him unavailable for much of the preseason.

“I knew I couldn’t get off the stage” without being asked about the quarterback situation, Pederson joked Monday morning. “We’ll just enjoy this moment, celebrate it with our fans in Philly. It’s not about one guy, it’s about the team.”