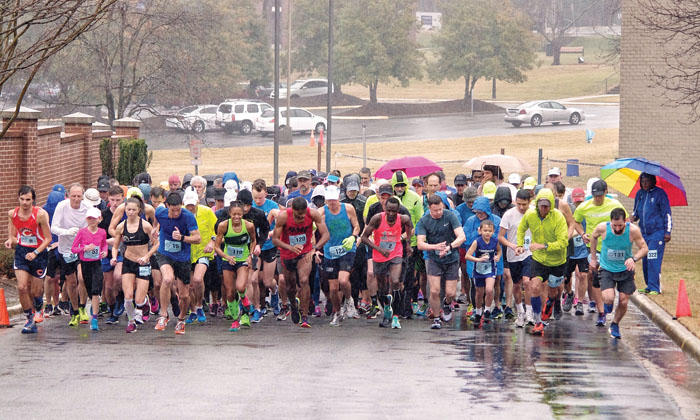 The start of the 2018 Novant Health Winter Flight 8K on Sunday afternoon at Catawba College. Photo by David Lamanno.

A foggy and drizzly morning turned into a steady rain during Sunday afternoon’s Novant Health Winter Flight 8K at Catawba College. Several runners had hopes of contending for a state record on the historic course during the race’s 35th running.

Runners from six states and Kenya participated in the race that is part of the Running Journal Grand Prix, a yearlong series of high-profile and quality races.

Eliud Ngetich, from Eldoret, Kenya, had set the current course record of 23:07 in 2015. He returned in an attempt to better that time Sunday but had lingering flu-like symptoms and overall tiredness following a day of traveling from Kenya to Charlotte by way of New York City before finally arriving in Salisbury at nearly 9 p.m. on Saturday night.

Ngetich said, “When I was warming up, I felt it and I knew this was not going to be a record-breaking day. I gave myself hope that I’ve sometimes done well even on bad days. I went through the first mile and didn’t feel good. During the second mile I picked it up well and tried to push harder but it wasn’t good enough. From there, I just decided to enjoy the rest of the race. All in all, it wasn’t my day. Crossed the finish line smiling at least for winning!”

Ngetich was the overall winner in 24 minutes and 36 seconds, about two minutes off his expected performance and personal best of 22:42. Things did work out for 85-year-old Grant Egley of Lake Waccamaw, N.C. Egley wanted to establish the 85-89 8K age group record and came to Salisbury specifically to do it. While his time was a little slower than expected at 56:58, Egley should receive notification of the pending record in the next few weeks.

In possibly the race of the day, 11-year-old Emberleigh Pauley-Brown blitzed the 4.97-mile course in 38:04. She said, “This was my first 8K race and it was amazing with the rolling hills adding a sense of enjoyment. The rain made it so much fun and I loved the course. Running the 8K was a lot different than 5Ks and I really like the longer distance. I came off the course smiling while knowing I had done a good job!” Emberleigh Pauley-Brown races to first place in the 14 and under age group
in the Winter Flight 8K. Photo by David Lamanno.

Second place for the men was Ryan Jank of Mooresville with a time of 26:16 while third went to Orinthal Striggles of Columbia, S.C., in 27:37. The top women were Shawanna White of Columbia with a time of 29 minutes and 23 seconds, followed by Molly Nunn of Winston-Salem in 30:07 and Kelly Lowman of Salisbury in 34:19.

Other events included a 5K Health Walk and a half-mile fun run for kids 12 and under.

The complete list of results is posted at www.salisburyrowanrunners.org