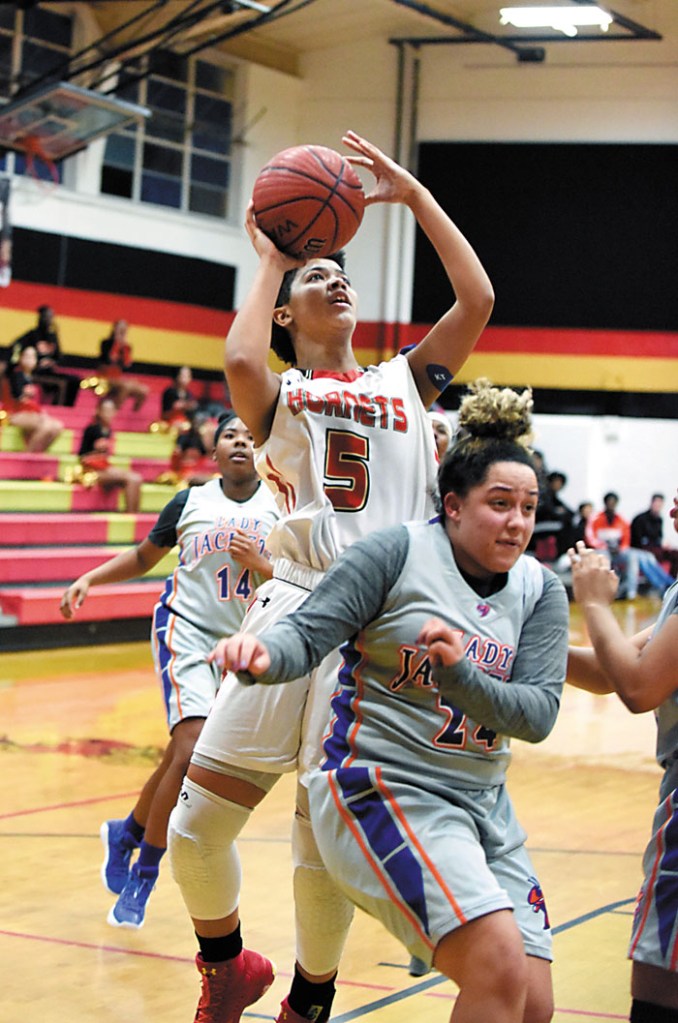 SALISBURY — There’s something special about 1,000 points.

There wasn’t any doubt Bryanna Troutman was going to get there. There hasn’t been any question about that since her freshman season. A 6-foot junior, she’s probably headed to 1,500 or so for her career. But there was still anxiety as 1,000 loomed on Tuesday night with Lexington visiting the historic Salisbury gym.

Those 1,000 points are a long-term goal for lot of players, and suddenly, it was right there in front of Troutman, close enough to touch. She needed 14 more points entering the game, and she averages a lot more than that. Coach Lakai Brice’s pre-game advice wasn’t earth-shaking: “Just play your game.”

“At the beginning of the game, I was still really nervous,” Troutman said. “There was the 1,000. There also were coaches here. UNC Wilmington was here.”

The impressive thing was that even with the nerves, even with the desire to put 1,000 in the rearview mirror as quickly as possible, Troutman stayed outwardly calm during Salisbury’s 65-44 Central Carolina Conference victory. She let the game come to her. She didn’t force anything. She passed up some decent shots to get teammates better shots.

“I’ve been where she was tonight,” Brice said. “I remember scoring that 1,000th point in high school and I remember doing it again at Catawba College. It’s a huge accomplishment. Bryanna will remember it.”

Troutman had a three-point play to get the night started for the Hornets. She can score from anywhere and swished a 3-pointer for an 11-3 lead midway through the first quarter.

When she chased down a long rebound and turned it into a personal fastbreak with a lefty finish, she had 996. She got 998 when her unselfish pass turned into a miss and a stick-back in the lane. With 3:53 left in the second quarter, she reached 1,000. Teammate Lexi May pulled down a defensive rebound, and Troutman ran the floor for a fast-break layup. She had to wiggle past a couple of Yellow Jackets, but she put it in from the right side.

“I kind of wanted to get to 1,000 on a 3-pointer,” Troutman said with a laugh. “But I was running, and then I realized that it was happening. They tried hard to keep me from getting that layup. I”ll take it.”

That layup put the Hornets (14-2, 11-1 CCC) ahead 29-17. The game was halted briefly so Troutman’s feat could be acknowledged to the crowd by athletic director Dale Snyder. After receiving  congratulations from family, teammates and coaches, Troutman was ready to get back to work.

Troutman had a dry spell after reaching 1,000, but she hit a 3-pointer as the third quarter was coming to a close. She finished with terrific numbers despite sitting down early— 21 points, 13 rebounds, six assists, four blocks and four steals. She might get a quintuple-double some night that the Hornets need her to play full blast for 32 minutes.

“Bryanna had a great night, and what made it really special for her is she got 1,000 points playing with girls that she enjoys playing with, and they enjoy playing with her,” Brice said. “She really passed the ball well tonight. She could’ve had a triple-double, if we’d been able to finish all the layups.”

Troutman is the 11th in program history to reach 1,000 and the first to do so for Brice, who is in her fifth season.

Sophomore Anayia Fulson scored 15 for the Hornets, while senior Maria Capito had 14. It’s been a struggle for Capito lately due to a case of the flu.

“I was really sick last week, but the snow and being out of school gave me a chance to get well,” Capito said. “I was really happy to be able to play better tonight with Bryanna getting her 1,000 points. She’s worked really hard for that.”

Lexington made a little bit of a run at the Hornets early in the third quarter, but Tacorra Robinson stopped it with three buckets. Robinson also had five steals.

“Tacorra has played really solid in our last few games,” Brice said. “Lexington is a very scrappy team, a tough rebounding team, but this was a good game for us.”

The Hornets did a little celebrating after the game — 1,000 points, usually means cake, among other things —  but mostly they stayed serious. Brice, Troutman and Capito all talked about improved ball movement, and that’s a key to the Hornets’ continued success.

“There were some games where I thought we kind of rushed things and got out of sync,” Capito said. “But tonight we were all together, trying to help each other score.”