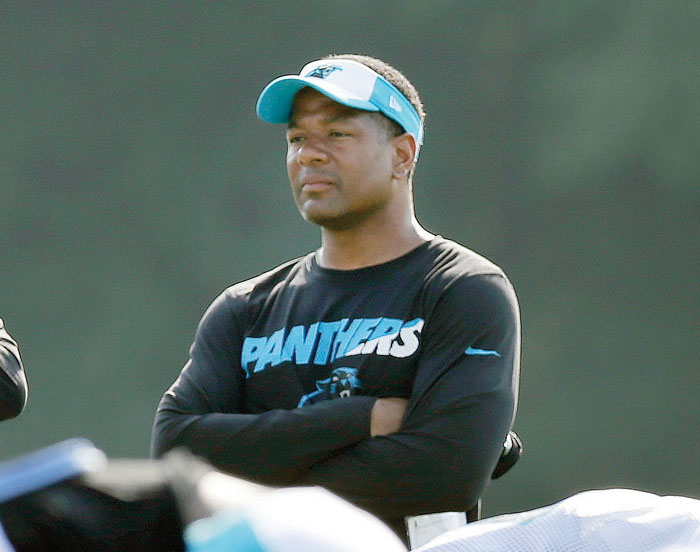 By TERESA M. WALKER, AP Pro Football Writer
NASHVILLE, Tenn. (AP) — The Tennessee Titans kicked off their search for a new head coach Thursday with a pair of interviews — both defensive coordinators who’ve never been NFL head coaches.
The Titans confirmed they interviewed Houston’s Mike Vrabel and Carolina’s Steve Wilks. Tennessee is looking to replace Mike Mularkey, fired Monday after he went 21- 22 and won the franchise’s first playoff game in 14 years.
Vrabel, 42, has never been a head coach at any level. He is coming off his first season as defensive coordinator for the Texans. Vrabel played 14 years in the NFL with Pittsburgh, New England where he won three Super Bowl titles and Kansas City before going into coaching. He started coaching in 2011 at his alma mater, Ohio State. He coached linebackers and defensive linemen.
Vrabel went to Houston in 2014 and coached linebackers with the Texans for three seasons before becoming coordinator. The Texans won the AFC South in 2015 and 2016 thanks to strong defenses. The unit slipped this season with the Texans’ defense decimated by injuries to players including J.J. Watt and Whitney Mercilus .
General manager Jon Robinson gave little indication Monday of what he’s looking for in the man who will be the Titans’ fourth head coach eight seasons and third in quarterback Marcus Mariota’s fourth season.
“Leader of men,” Robinson said of what he wants in a new head coach. “Obviously, the things that are stamped out there on those pillars: team-first, detailed, tough, dependable. One that’s going to, like I said, maximize the abilities of the players in all three phases of the game.”
Wilks has only been a head coach in college at Savannah State in 1999. His first season as defensive coordinator with the Panthers was 2017, but he has coached with Chicago, the Chargers and joined Carolina in 2012. Wilks was assistant head coach in 2015 and 2016.
Interviewing Wilks helped the Titans satisfy the league’s Rooney Rule, and Wilks also interviewed with the New York Giants about their opening. Panthers linebacker Thomas Davis certainly thinks Wilks has earned the right to be a head coach.
“He has done a tremendous job of coming in and taking over this defense and really giving us a chance to be successful,” Davis said.
___
AP Sports Writer Steve Reed contributed to this report from Charlotte.
___
Follow Teresa M. Walker at www.twitter.com/teresamwalker
___
For more NFL coverage: http://www.pro32.ap.org and http://www.twitter.com/AP_NFL