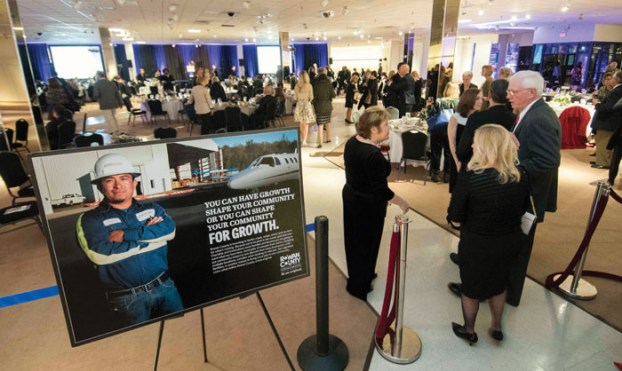 The 92nd Rowan County Chamber of Commerce Gala was held at West End Plaza. The night's events included passing the gavel to the new chairwoman of the board and handing out several awards. Jon C. Lakey/Salisbury Post

For a celebration of entrepreneurism, the venue was fitting. The gala was held at West End Plaza, just feet away from the future home of the Rowan IDEA Center: a soon-to-be-constructed hub for entrepreneurial development.

More than 300 business and community leaders attended, leaving the gala sold out.

The Rowan Economic Development Council and the Rowan County Tourism Development Authority co-hosted the gala, which was emceed by Kent Bernhardt.

“Ninety-two years. That’s a very, very long time and it’s filled with a lot of success stories, a lot of people’s hard work and sweat,” Bernhardt said. “I’ll tell you what, they’ve created a community that we all enjoy today.”

Bernhardt welcomed guests and introduced speakers without sparing humor. Well-intended jabs were directed at Salisbury Mayor Al Heggins — “You can always trust a guy named Al” — and Paul Fisher — “It was so cold Paul Fisher’s teeth were chattering, and he didn’t even have them in.”

Business returned to the serious as the gavel representing chamber leadership was passed from Tim Norris of Healthcare Management Consultants to Janet Spriggs of Rowan-Cabarrus Community College.

Norris took time to highlight the chamber’s accomplishments in 2018, including being listed as one of the top 10 chambers in the country for membership retention by the American Chamber of Commerce Executives Association.

Norris challenged the chamber to pursue a goal of inviting Apple co-founder Steve Wozniak to Rowan County in three years.

Wozniak serves as innovator in residence at High Point University. Norris said the development and strengthening of the IDEA Center could be just the pull needed for a visit.

Spriggs will serve as chairwoman of the board for 2018. She said the top priorities for the chamber include educating people about the importance of skills trades, promoting community pride, encouraging entrepreneurial development and supporting the Rowan-Salisbury school system.

This locally owned family business began in 2013 and now has more than 35 employees. It recently established a national headquarters in Salisbury and is offering Go Burrito franchises.

The award was accepted by owners Mikey and Lily Wetzel.

Mikey Wetzel said he was surprised by the award but that his focus remains on the vision of entrepreneurial development in Salisbury.

Gegorek is chairwoman of the chamber’s Minority Business Council that was started in 2016. She has also been involved in the chamber’s Leadership Rowan program, the Total Resource Campaigns and membership committee.

“She will take on any assignment you ask of her with enthusiasm and excellent organizational management skills,” said Norris, who presented the award.

The criteria for this award includes an individual who demonstrates a commitment to service and civic participation over a sustained period of time and who sets a standard and fosters a culture of citizenship, service and community responsibility.

Wall worked for F&M Bank for more than 18 years before he retired at the end of 2017. He has been a community volunteer and was involved in a number of nonprofit organizations, including the chamber, Kiwanis club and the United Way.

“When I look around the room and I see the leadership of the chamber, how well City Council and county government, county commissioners, work, it’s like everybody’s pulling in the same direction and it’s amazing,” said Wall. “There’s so many pieces of this that it’s a wonderful community.”

New to the gala this year was the Rowan Tourism Development Authority’s presentation of Rowan Original Service Awards for the hospitality industry.

The first-place winner was James Rogers, who received $2,000.

D.B. Kepley’s work ethic carried him through the Depression, war and everything else

SALISBURY — As he sits in his kitchen and allows himself to reminisce, David B. “D.B.” Kepley shrugs off those... read more