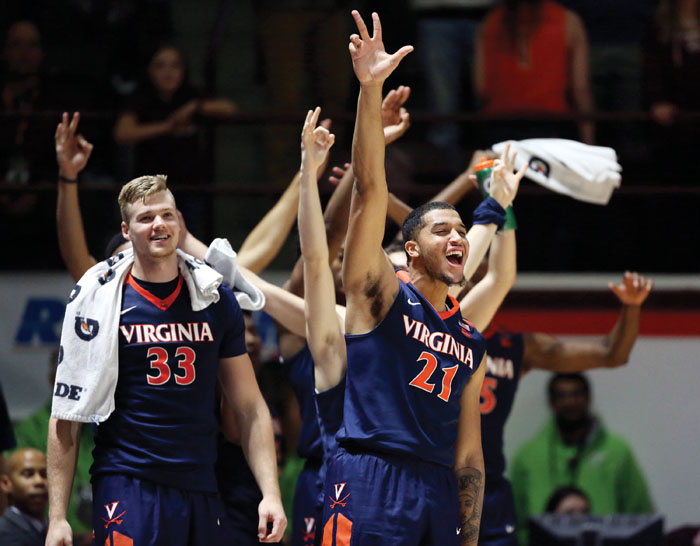 Virginia players celebrate a 3-point basket by teammate Justice Bartley (2) in the final minutes of the second half of an NCAA college basketball game against Virginia Tech in Blacksburg, Va., Wednesday, Jan. 3, 2018. Virginia won 78-52. (Matt Gentry/The Roanoke Times via AP)

GAME OF THE WEEKEND: No. 12 North Carolina at No. 8 Virginia (1:00). One of two matchups of ranked teams this weekend has the defending national champion Tar Heels (12-3, 1-1) looking to bounce back from their first conference loss of the season, a 81-80 defeat at No. 24 Florida State on Wednesday night. That attempt comes at the site of perhaps their most humiliating defeat from a year ago — a 53-43 loss in Charlottesville, Virginia, that marked the lowest-scoring game in coach Roy Williams’ tenure at his alma mater. The Cavaliers (13-1, 2-0) have won five in a row and, true to form under coach Tony Bennett, have held each opponent in that stretch to 60 or fewer points.

LOOKING AHEAD: No. 25 Clemson is off to a surprisingly strong start, earning its first national ranking since 2010, and the Tigers will look to keep it going next Thursday night when they look to complete a season sweep of North Carolina State.

The Wolfpack have been tough to beat at home under new coach Kevin Keatts, winning nine of their first 10 home games before Saturday night’s visit from No. 2 Duke (8:00). Clemson won its debut as a ranked team Wednesday night by beating Boston College, 74-70.

PLAYER TO WATCH: Notre Dame freshman D.J. Harvey might be asked to mature in a hurry, with forward Bonzie Colson out for about eight weeks with a broken left foot. Harvey figures to be Colson’s replacement until the All-American is healthy again. He had a season-best 17 points in his first start in place of Colson, a rout of N.C. State, and will be counted upon to replace at least some of the 21.4 points and 10.4 rebounds that Colson averaged for the Irish.

INSIDE THE NUMBERS: Marvin Bagley III has wasted no time making history during his first — and only? — season at Duke. In Hall of Fame coach Mike Krzyzewski’s nearly four decades with the Blue Devils, only four times has a played had 30 points and 15 rebounds in a game. Three of those performances belong to Bagley, who had 32 points and 21 rebounds in last week’s victory over Florida State. Bagley leads the league in both scoring (21.9 ppg) and rebounding (11.6 rpg) and his rebounding total in that game was a program record for freshmen.