Pats end regular season at No. 1 in AP Pro32 poll 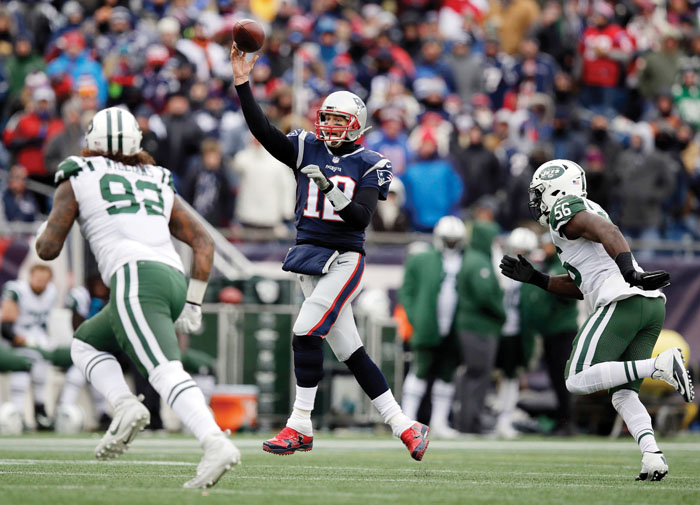 By SIMMI BUTTAR, AP Sports Writer
NEW YORK (AP) — Tom Brady and the New England Patriots ended the regular season where they started it.
Being chased by the rest of the NFL.
The Patriots finished the regular season as the No. 1 team in the final AP Pro32 poll on Tuesday, receiving 11 of 12 first-place votes for 381 points in balloting by media members who regularly cover the NFL.
The Patriots (13-3), tied for the best record in the NFL, will have home-field advantage throughout the AFC playoffs.
“Can we skip straight to the AFC championship game? I can’t wait,” said Charean Williams of Pro Football Talk.
“It could prove a better matchup than the Super Bowl.”
The Minnesota Vikings (13-3), who were tied with the Pittsburgh Steelers last week, remained at No. 2 with 367 points. The Vikings, who received the remaining first-place vote, have the No. 2 seed in the NFC and have a chance to stay at home throughout the playoffs, including the Super Bowl which will be held at U.S. Bank Stadium on Feb. 4.
“What a remarkable job by coach Mike Zimmer, who wins the NFC North going away with backup Case Keenum and now takes aim at becoming the first team in NFL history to play a Super Bowl in its home stadium,” Newsday’s Bob Glauber said.
The Steelers (13-3) slipped a spot to No. 3 in the poll with 365 points and will open the playoffs at home on Jan. 14 in the divisional round.
“Need (Antonio) Brown for the playoffs,” Fox Sports’ John Czarnecki said of the Steelers star wide receiver who left the loss to the Patriots on Dec. 17 with a calf injury.
The Los Angeles Rams and the Philadelphia Eagles switched places. The Rams moved to No. 4 and the Eagles (13-3) slipped to No. 5.
“The question hanging over the city of Philadelphia right now: Will Nick Foles be enough?” asked Jenny Vrentas of The Monday Morning Quarterback. “The last two performances of the regular season were uninspiring, but the Eagles have two weeks to regroup and come up with a game plan to win at home without Carson Wentz.”
The New Orleans Saints and Carolina Panthers, who will meet Sunday afternoon in the Superdome in the final game of wild-card weekend, remained at No. 6 and 7 respectively.
“The Saints will be hard to beat in the Superdome with that running game,” said John Clayton of 710-ESPN Seattle.
The Kansas City Chiefs and Atlanta Falcons each moved up a spot to No. 8 and 9 respectively.
The Jacksonville Jaguars slipped two spots to No. 10 after losing to the Tennessee Titans, who jumped four spots to No. 11.
The Buffalo Bills, who ended the league’s longest streak of consecutive seasons without a postseason appearance when Andy Dalton and the Bengals stunned the Baltimore Ravens 31-27, gained two spots to finish tied with the Los Angeles Chargers at No. 12.
“After ending a 17-year playoff drought, the resourceful Bills travel to Jacksonville feeling giddy and carefree,” said Ira Kaufman of SB Nation Radio.
___
For more NFL coverage: www.pro32.ap.org and www.twitter.com/AP_NFL