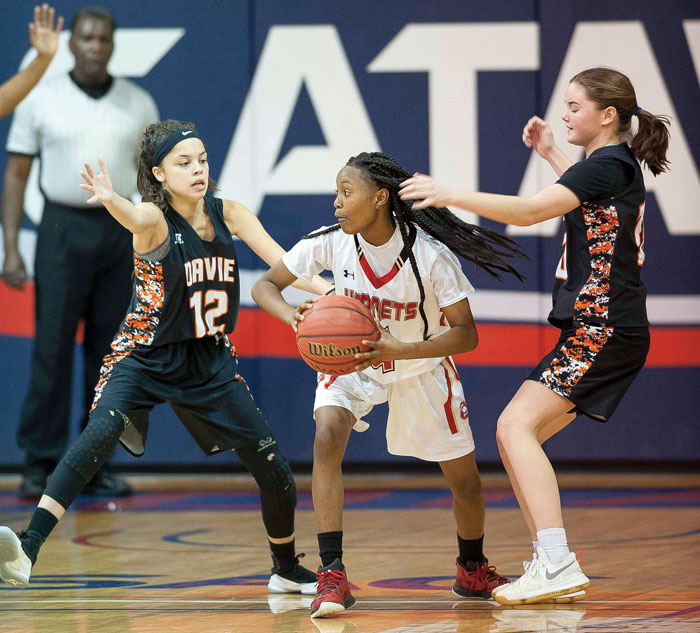 SALISBURY — Davie County’s Trinity Hayes couldn’t miss, Salisbury’s girls couldn’t do anything but miss, and for a half, a feisty No. 8 seed in the Dale’s/Sam Moir Christmas Classic took it to a sleep-walking No. 1 seed.

“We knew we had to control pace, and in that first half we were patient and we made Salisbury play our tempo,” Davie coach Kevin Revels said. “We made it a half-court game, and Trinity Hayes was special in that first half. She has a lot of offensive skills and Salisbury’s defense wasn’t finding her. I don’t think their girls realized that she’s as good as she is.”

The Hornets found Hayes in the second half and they also found themselves. Salisbury turned it into a track meet, battered Davie in the third quarter, 21-6, and won by a deceptive 59-41.

Davie shot better for the game, but the Hornets had huge a advantage in offensive rebounds (18-7) and won the turnover battle (26-12).

The biggest difference-maker was a surprise — Salisbury guard Jinika Glenn, who is usually regarded as the fifth Hornet. Glenn, who came in averaging 4.1 points per game, scored a career-best 14.  She shot 6-for-7, which made her LeBron James on a day when both teams were shooting in the 36-37 percent range.

“Coach (Lakai) Brice has talked to me about needing to score more, about looking for my offense more and about turning my defense into offense,” Glenn said. “I got some points off good passes by my teammates and I made some shots.”

Brice couldn’t have been happy, but she didn’t panic. Salisbury has played some lousy first halves this season, but they’ve generally been followed by spirited second halves.

“The adjustment we needed to make at halftime was to pick up the pace,” Brice said. “I think, even though we’re the No. 1 seed, we had some nerves.”

Revels knew Salisbury would ramp up the heat in the second half. He knew the Hornets would try to make it a swifter game played full-court.

“We knew they would exert more pressure, and that’s exactly what we talked about,” Revels said. “We knew we’d have to take care of the basketball, but we didn’t, and they got a lot of easy transition buckets.”

Capito, 0-for-6 on 3-pointers in the first half, finally got a short banker to fall for a 26-all tie with 5:33 left in the third quarter, and she always provides offense once the Hornets can get her going. Glenn took a nice pass from Anayia Fulson and swooped in for the layup that put the Hornets ahead to stay at 28-26.

“Jinika came to play,” Brice said. “She sparked us. They were double-teaming Bryanna and a lot of teams are face-guarding Capito, so we need Jinika’s offense. She was driving more today. She can score.”

When Carter measured a 3-ball with 4:46 left in the quarter, Davie was down 31-29, but a minute later the Hornets went up by eight on a Capito 3-pointer. When Capito got another 3-pointer to roll in at the third-quarter horn, the Hornets were ahead 43-30 and they were in control.

“It was a  tough first-round game, and we expected that,” Brice said. “Davie was the eighth seed, but that’s a big school and we knew they’d played close games against good teams.”

Troutman picked up her fourth foul with 3:30 left in the third quarter and sat down, but Fulson provided the leadership the Hornets needed without her, and Salisbury was getting plenty of offense from Capito, Glenn and Robinson. Troutman was actually on the bench as the Hornets pulled away. That won’t happen often.

Glenn also supplied most of the defense as the Hornets did  a better job of containing Hayes in the second half. Hayes has great shooting range and a tricky first step, but Glenn is quicker and was able to take some things away.

Troutman had seven offensive rebounds. Capito made four 3-pointers in the second half.

“We passed the ball better in the second half and we played better defense as a team,” Glenn said. “It takes teamwork to make the dream work.”