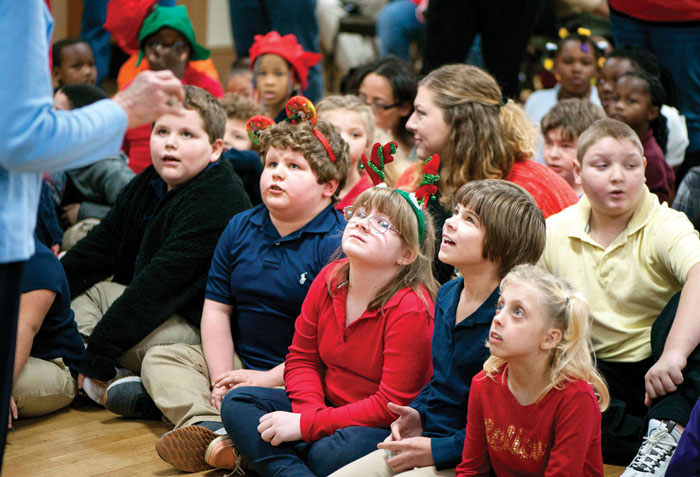 SALISBURY — The celebration has been going on since 1980, when Kaye and Ed Hirst wanted to have a Christmas program for kids with disabilities at the Harold B. Jarrett American Legion building.

Post members and their auxiliary have been at it ever since.

“Our kids have a variety of disabilities with most of them being intellectual,” said Sarah Boger, cross-categorical adapted curriculum teacher at Shive Elementary School. “Many of them also have physical disabilities on top of that as evidenced by the wheelchairs. Our kids go to school at Shive, Overton, Millbridge and Hanford Dole.”

Boger works with American Legion Adjutant Harry Garwood, and she coordinates the kids’ attendance once the day and details are set in place.

“I came here to help in college when my mom, Kathryn Baker, was the school system contact,” Boger said. “The CCAC teachers and assistants don’t get to see each other much, but we look forward to this Christmas party each year. The kids all know Santa.”

The kids and school staff arrived by bus just before 10 a.m. First on the agenda was a puppet performance by Mountain Marionettes of Cedar Mountain. Various puppets danced to Christmas tunes with many of the kids following every move. Others colored with help from American Legion volunteers like 97-year-old Minnie Grabowski.

“I was born and raised here but lived in New Jersey for 45 years,” Grabowski said. “”After moving back, I got involved in 1996. Anything concerning these children is wonderful for me. I love working with them, especially when they need help coloring.”

Grabowski also volunteers for the VFW and the fire department auxiliary and is a member of the Red Hat Society.

Other American Legion members pointed out that she participates in all their projects and often outworks the others.

Shive Elementary fifth-grade student Katie Durham was intent on the puppet show but also had other things on her mind.

“I want to see Santa!” she said. “But I don’t want to miss the end of the puppet show. My other favorite things about the party are hot dogs and chips, ice cream and getting a gift.”

For Katie, it was the sixth Christmas party at the Legion building with her classmates.

The same group is also treated to an Easter egg hunt in the spring.

A meal followed with the usual hot dogs, chips and ice cream. Individual ice cream containers were passed out by volunteers from Blythe Construction of Charlotte. Katie Wilhelm works in the contract department and was on hand for the first time.

“It is so good to see the kids enjoy themselves,” Wilhelm said. “This is a great way to help people, especially here at Christmas time. We brought the treat bags that each student will get as they leave.”

Once the meal neared its end, the kids began to congregate around a Christmas tree stacked high with wrapped gifts. A volunteer suggested that Santa might be nearby and the kids needed to call for him.

When he heard his name, Santa did arrive and quickly set about giving out personalized gifts. Each student’s name was called, and Santa took a moment to greet them.

“Looks at my new shoes,” Shive student Caden Evans said. “I am going right home to put them on.”

The teachers sent in a list of three choices for a personal gift for each student, Garwood said.

“We used to go out and shop for weeks to help Santa but now, a lot of the gifts are found online,” he said. We found sponsors to help with the expenses.”

Santa said he had been coming to the party for a long time.

“Kids, you never know what they are going to say,” he said. “One asked me for a bedroom to herself and another wanted a horse. I’ll keep those in mind, but today will brighten a lot of Christmases.”

Phyllis Richardson is a former assistant teacher for children with disabilities and a 50-year American Legion Auxiliary member.

“I have been to all 37 of these wonderful Christmas parties,” Richardson said. “I just love these kids. Many times, these gifts could be the only one for their Christmas. We wanted to make today something that they will remember.”

The Harold B. Jarrett Post is open to any veteran interested in membership. Meetings are held the first and third Mondays of each month. The office is open from 9 a.m. to noon daily.