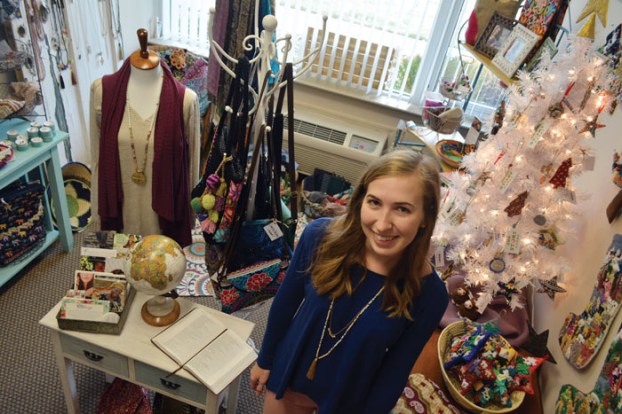 As a result of a mission trip to Tanzania this summer, Lauren Franks has opened New Things, a shop specializing in handmade goods from around the world. Susan Shinn Turner photo

Purchases that are a blessing: New Things fair trade shop opens in Landis

LANDIS — A recent life change pushed Lauren Franks outside her comfort zone — all the way to Tanzania.

When she returned home this summer, she knew she wanted to do something to help. She wanted to try something new, but she just wasn’t sure what.

In October, Franks, 23, opened New Things, a gift shop offering fair-trade clothing, jewelry and accessories made by women in 17 countries.

Other contacts she found through reaching out to missionaries.

“I just started emailing people, and it’s amazing how positive they are,” she says. “They want to get their name out there. Selling items provides a living for women, and with profits, you can hire more people.”

Many of the labels come with a picture and brief biography of the woman who made the handcraft, Franks says.

Fair trade is a social movement to help producers in developing countries and to promote sustainable farming.

A Christmas tree is decorated with ornaments from 2nd Story Goods in Haiti.

There are rolled-paper necklaces from Mighty River Project in Uganda, and jewelry from Village Artisan and Ashabelle in India.

For now, Franks’ shop is in a former office at First Reformed Church, 210 N. Central Ave. Her father, David, serves as senior pastor at the church.

“We have been looking and praying for a storefront,” says Franks’ mom, Dawn.

On the other hand, Franks says, it’s been a good place to start.

“I didn’t want to take advantage of the church,” she says, “but I’m so thankful for this start and learning how to run a business.”

“It’s been going really well,” she says. “We’ve been making money and reinvesting into more inventory. When people come in, they make a good-sized purchase. It’s not a pity purchase.”

In Tanzania, Franks spent a day at Sifa Threads, a program that teaches young women sewing skills, business skills and discipling so that they can return to their communities and start their own businesses.

Franks traveled with a group from Charity Baptist Church. Soon after, she set up a “boutique in a box” at a church with Sifa Threads items.

“I really had great success,” she says. “I thought, this could be a good thing to do, not just with Sifa Threads but with organizations all over the world.”

Franks graduated from N.C. State University in 2016 with a degree in business administration with a concentration in marketing. She’d been a summer intern at S&D Coffee, then worked there until April as a paid intern.

“I’d started my job hunt, but I wasn’t having much success,” she admits. “I thought while I’m not doing anything, I’ll go on this mission trip to Tanzania. God really worked it out.”

“I was saving for a car,” she says. “I was in a good situation. I was living at home so I was able to save money.”

“It is amazing how God orchestrates things,” says Dawn Franks, who helps her daughter with some of the bookkeeping. Otherwise, she provides moral support along with Franks’ father and younger sister, Leslie, 21 a junior at theh University of North Carolina at Charlotte.

“I get so excited in talking about,” Franks says of her new venture. “Other people have noticed. They can see I’m happy.”

She is in the process of forming a nonprofit organization called Project 43:19. The Bible verse is from Isaiah 43:19, “I am about to do a new thing.” To attain nonprofit status, she must have a board of directors. Its members include Alan Allman, David Barlow, Chrissy Blackwell, Vernelle Davis, Chip Cobble, Dawn Franks, Susan King, Lucas Merrell, and Richard Myers.

“From a young age, she has been shaped to pursue and develop this ministry,” says Susan Kings.

“I send her pictures of things we have and she says, ‘Oh, I want that!’” Dawn says.

“Lauren’s mission with New Things to help those in need makes buying her exquisite handcrafted goods even better,” says Williams. “Knowing that my purchases are helping women all across the world become more independent and take care of their families in is the best reason I can think of to own the beautiful work they create.”

Hannah Lambert, a friend of Lauren’s from First Reformed, is a freshman at Western Carolina University.

“I absolutely love the store so much,” Lambert says. “The clothing is stylish, comfortable and reasonably priced. I am obsessed with the jewelry. It’s so cute, and I would honestly love to buy it all. The stories behind the people who create it make it even more special.

“I’m so proud of Lauren for stepping out in faith by opening the store, and I love knowing that I’m helping be a part of such an awesome mission just by shopping,” says Lambert

Jamie Gobble, whose husband serves on the board, loves New Things — with one caveat. “The only struggle I’ve had is that every time I’ve Christmas shopped at New Things, I fell in love with items for me. I’m sure it’s because I have such a heart for artsy, handmade items. The craftsmanship of these items is just beautiful. So much heart and artistic talent went into creating each item.”

“How many times can you go shopping and feel like your purchases were a blessing?,” Gobble says.