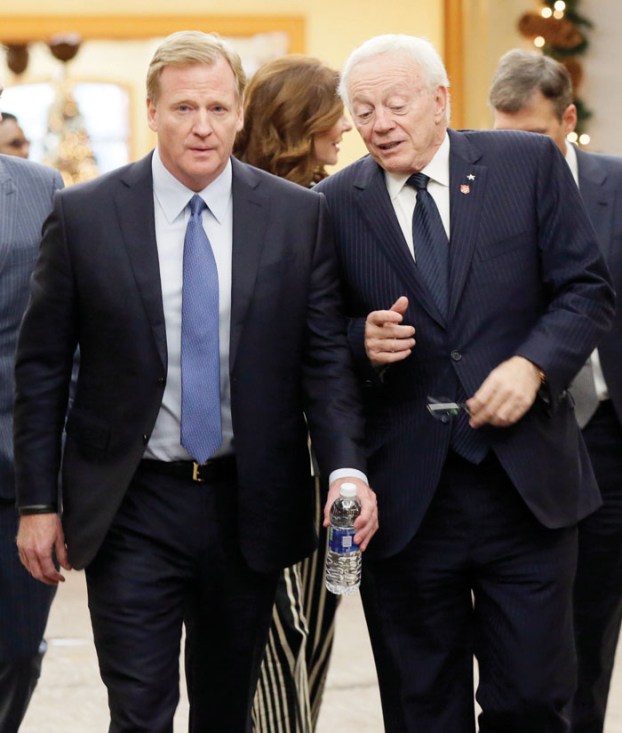 IRVING, Texas (AP) — NFL Commissioner Roger Goodell twice turned to Jerry Jones when asked about his relationship with the powerful Dallas Cowboys owner who tried to scuttle his contract extension.

“Jerry, do I look like I take it personally?” Goodell asked after the second question as Jones, the recent Hall of Fame inductee, winked at him. “’No’ is the answer to that question.”

A new five-year deal for Goodell had been signed for a week when owners gathered for meetings at a luxury Dallas-area hotel Wednesday. And while Jones was conciliatory, even hugging Goodell when replacing him on the podium, the outspoken billionaire wasn’t conceding anything.

Goodell was a bit defiant himself on another topic, contradicting his own lead spokesman who had said earlier in the day that Goodell considered the contract that now runs into 2024 to be his last.

“I haven’t made any determinations,” Goodell said. “This is something that I’m looking forward to the challenges. I think our league is in a great position. But we obviously have challenges, just like any other industry.”

Goodell overcame the challenge from Jones, who threatened to sue over the extension in a dispute that arose after Goodell’s decision to suspend star Dallas running back Ezekiel Elliott for six games over domestic violence allegations in a case  prosecutors didn’t pursue.

Jones has denied that Elliott’s suspension played a role in his objections over the power the commissioner wields or his concerns about the way the NFL was handling protests involving the national anthem.

The 75-year-old Jones also was at odds with Atlanta owner Arthur Blank, chairman of the six-person compensation committee that had been unanimously approved in May to complete a deal with Goodell. Jones wanted all the owners to approve the deal.

For Jones, the victory came in owners agreeing to consider changes to the power of the commissioner’s role through the league’s constitution.

“I’m very rewarded that this exercise of extending Roger has brought that about,” Jones said. “I didn’t do it. It took the will of 32 owners to get that done. It’s an antiquated constitution, an antiquated situation as to the power of the commissioner. This will address that.”

League spokesman Joe Lockhart said 90 percent of Goodell’s contract will be incentive based, which he said was an increase in nonguaranteed income over previous deals.

The incentives in part are tied to TV ratings and new broadcast deals, along with negotiating the next labor deal with the current collective bargaining agreement expiring in 2021.

A person with knowledge of the agreement has told The Associated Press the five-year extension is worth almost $200 million with a base salary of $40 million. The person spoke on condition of anonymity because the figures are not made public.

Goodell made nearly $32 million in 2015, the last year public records of the NFL are available. League revenues have more than doubled to $14 billion since Goodell replaced Paul Tagliabue in 2006.

Jones took aim at Blank’s compensation committee because he didn’t think enough information about the negotiations was being shared with other owners. Blank removed Jones as an ad-hoc member of the committee after the threat of a lawsuit.

The Atlanta owner said Jones didn’t have a role in an increase in the part of Goodell’s contract that isn’t guaranteed, but that Jones did have input on possible changes to how the committee is put together.

When the Cowboys and Falcons played last month in Atlanta, the respective owners skipped their customary pre-game talk on the field.

“I’ve got a great respect for Jerry,” Blank said. “I spoke to him … on the phone about a week and a half ago. It was a very good conversation. I thanked him, which I didn’t get a chance to do, or chose not to do really, the time we played because I didn’t think it was the right setting.”

Blank said the committee’s handling of Goodell’s extension was the most transparent he has seen in 35 years, going back to the tenures of Tagliabue and Pete Rozelle. Blank said owners were updated in general meetings and with multiple phone calls.

“I don’t know that there’s a rift going forward,” Blank said. “I think that Jerry, he loves the league, he loves the Cowboys, he’s very passionate about issues that he cares deeply about, which is great. I think it’s important to have difference voices in the room.”

Corrects previous versions with $14 billion in NFL revenues, not $14 million.

SALISBURY — Salisbury 49ers head coach Brian Miller has been with the nonprofit football program since it began in the... read more