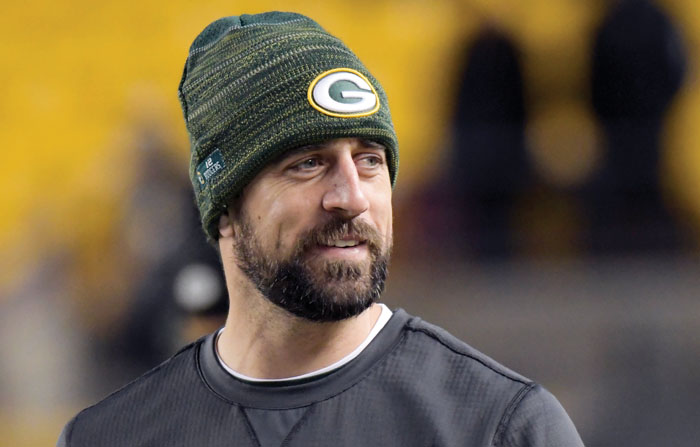 In this Nov. 26, 2017, photo, Green Bay Packers quarterback Aaron Rodgers watches warmups before an NFL football game against the Pittsburgh Steelers in Pittsburgh. Rodgers has been "medically cleared to return" to action after missing seven games with a broken right collarbone, the quarterback announced on Instagram Tuesday night, Dec. 12. (AP Photo/Don Wright)

News that the two-time NFL MVP was cleared medically to come back from a collarbone injury finally arrived Tuesday night, coming a bit later than coach Mike McCarthy hoped — but well worth the wait for the playoff-hopeful Packers.

Rodgers is in line to start this weekend against the Carolina Panthers.

“The strength and the flexibility came back the quickest,” Rodgers said after practice Wednesday. “It was just waiting on the bone to be ready to play.”

That clearance finally came on Tuesday night. He didn’t want to go into detail about how much his surgically repaired collarbone had healed.

He’s aware of the risks.

“Well, we’ve talked about everything, and I’m confident knowing all the information. That’s why I’m going to play,” Rodgers said.

So it’s back to a normal week of preparation for the quarterback after making what McCarthy had considered great progress in rehab since getting hurt against Minnesota on Oct. 15. At the time, the Packers warned that the injury could have ended Rodgers’ season.

The Packers (7-6) went 3-4 with backup Brett Hundley starting to stay in the playoff race, including a 27-21 victory in overtime last week over Cleveland. They are one of four teams with at least seven wins chasing Atlanta for the second wild-card berth in the NFC.

The path to the playoffs remains tough. But Rodgers’ return gives an emotional boost to a locker room that has already drawn confidence from two straight overtime victories.

“It’s great having him back, but if the decision went the other way, it’s still status quo — we still have to win these next three games,” left tackle David Bakhtiari said. “But obviously having one of the greatest players in the game right now makes us better as a football team.”

Rodgers is eligible to be activated Friday, eight weeks after initially going on injured reserve. But the preparation has already started. McCarthy said there would be extra individual work in practice.

“I feel confident I will be able to go out there and play the way I’ve always played, but I’ve been off for seven games and been out for a while,” Rodgers said. “So it’s going to take getting out there, getting that first pass, getting that first hit, and I’ll probably settle in.”

Rodgers, though, has looked good throwing the ball in brief periods when he has been before cameras, including pregame in Pittsburgh before the 31-28 loss to the Steelers on Nov. 26.

He returned to practice on what McCarthy called a “trial return” on Dec. 2, and led the scout team last week. The collarbone was scanned on Monday to determine he was ready to return.

The Packers are known for their conservative approach in dealing with injuries. Rodgers is known for his competitiveness.

“They laid out the gantlet of what needed to be done, he ran through it,” McCarthy said of the medical staff’s evaluation of Rodgers.

“You have to trust the people, the expertise, the care and we all understand the importance of every play coming back in this situation, especially Aaron’s specific injury. … We went through that process and this is where we are today.”

It did make for a late Tuesday night of preparation for the coaching staff before McCarthy was finally able to return home.

NOTES: CB Davon House (shoulder/back) did not practice after leaving last week’s win over Cleveland on a cart because of a back injury. LB Jake Ryan (knee) also missed practice, while S Josh Jones’ absence was not injury related. … CB Demetri Goodson (hamstring) practiced for the first time since being activated from the reserve/physically unable to perform list last week following an unrelated knee injury. … LB Nick Perry (foot/shoulder) was limited after missing last week’s game.

… WR Colby Pearson was signed to the practice squad. The rookie out of BYU was initially signed as undrafted free agent in June before being released during training camp in late August.