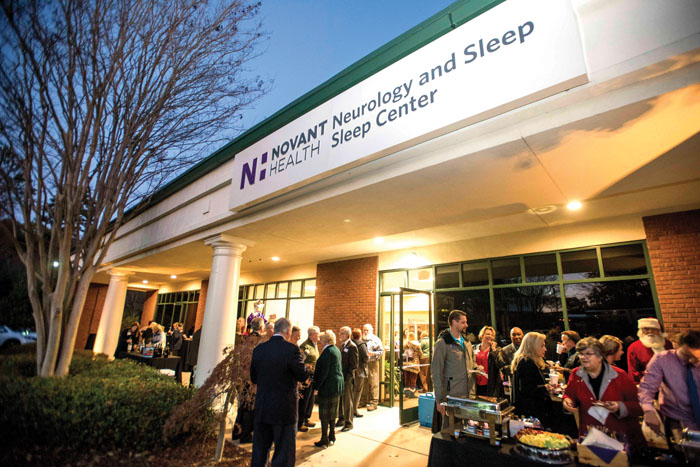 The Neurology and Sleep Center was one of the several facilities that were open to visitors at the mixer. Novant Health Rowan Medical sponsored a after hours mixer on Monday evening to introduce the expansion into existing facilities on Jake Alexander Blvd. Jon C. Lakey/Salisbury Post

SALISBURY — Think of it as a christening of sorts.

The Rowan County Chamber of Commerce held one of its “Business After Hours” on Monday night that included considerable food, beverages, trolley tours, Santa Claus, carolers, hot cider and even s’mores.

It all added up to a nice holiday mixer, but it also celebrated a new identity and emphasis for a long-established business park in Salisbury.

Formerly known as the Manning Office Park, the newly christened medical and business park has become dominated enough by Novant Health services that the name change just made sense.

Caldwell said Monday night it was Alexander’s idea to change the name. Alexander gave Caldwell all the credit.

No matter, Caldwell said from Novant Health’s point of view, the medical park provides many medical services in one convenient location and easy access for patients, who usually can park in front of the practices they’re visiting and walk right in.

The attractive campus also lies in a high-traffic, high-profile location along Jake Alexander Boulevard and close to Statesville Boulevard.

Alexander said the medical and business park, whose initial development goes back to the late 1990s, has 11 separate spaces, ranging from 1,000 to 7,000 square feet. Novant Health services take up more than half of the square footage, and “that was the reason for the name change,” Alexander said.

“And what better partner to have than Novant Health?” he added.

Dr. Timothy Hennie and Bonney Staffing Center also are at the complex, and the local Social Security office is nearby at 1840 Jake Alexander Blvd. W.

A&H Investments Inc. (Alexander and John Henderlite) developed the area between Rose Lane and Spring Drive initially. The “Manning” in Manning Office Park referred to one of the original owners of the land, R.E. Manning.

Caldwell said renaming the medical and business park for Novant Health took considerable discussions with legal and marketing folks, but Novant saw it as a great opportunity. Signs already have been installed, and electricity was supplied to the main entrance sign Monday.

Monday night’s trolley took the Chamber of Commerce guests to various locations throughout the park. Novant Health was the sponsor for the Business After Hours gathering.

Justin McMahan, market supervisor of sleep services for Novant Health, stationed himself at the Sleep Center, which moved to the park in July. It’s one of five sleep centers Novant has in his market area.