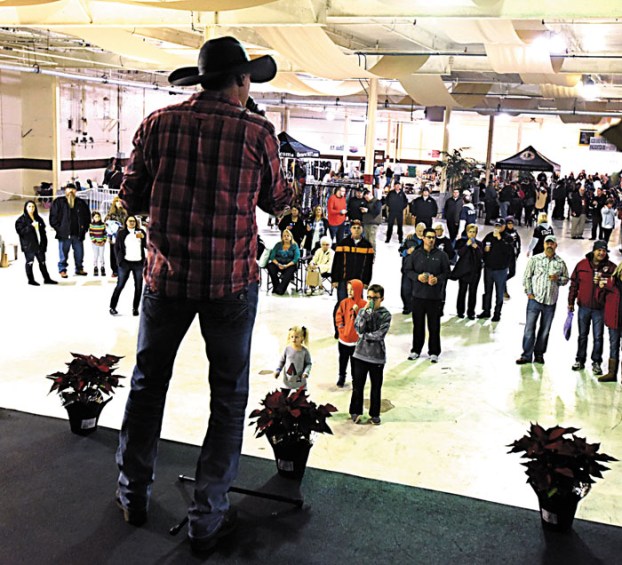 Wayne Hinshaw / for the Salisbury Post Darrell Harwood performs during the first Landis Wine and Beer Festival on Saturday.

LANDIS — Though some afternoon snow probably affected the overall turnout Saturday, the first annual Landis Beer & Wine Festival did not lack for enthusiasm.

Neither did the venue’s owner, Mike Wallace, he of the NASCAR Wallaces.

At the end of singer Darrell Harwood and his band’s set Saturday afternoon, Wallace invited kids from the crowd onto the stage, strapped on a guitar and fake-played while everybody combined to sing “Wagon Wheel.”

Wallace then hit on the notion to auction off one of Harwood’s flags — signed by Harwood and the whole band — to raise money for a pediatric cancer charity called Bring It 4 Braylon. When the bidding in the crowd below them was finished, the flag had gone for $500.

“There might be more,” Wallace said of having other beer and wine festivals in the future, “but there will never be another inaugural one.”

In buying the former Corriher Mill property on South Main Street, Wallace wound up with 37 acres that include two large buildings, plenty of parking lots and even a ball field.

Lindsey Van Wingerden, Wallace’s daughter, said they have 64,000 square feet to work with, and you could almost fit a small town into the structure being used for Saturday’s beer and wine festival — their first signature event.

“At least people get to see the inside of our building,” Wallace said of the impressive space.

The festival had 40 vendors, a huge stage for Harwood, a Beer & Wine Garden sponsored by the Gerry Wood Auto Group in Salisbury, activities for children, trailers for restrooms — and it still had room for plenty more.

“There’s nothing like this in Landis,” Van Wingerden said. “… All my vendors were saying, ‘Where’s Landis?’ Now they know.”

Van Wingerden was happy with the way it all came together Saturday. “Everything is going  fantastic,” she said, but both she and her father wondered how many people stayed home because of the snow outside.

“Who would have thought it would snow today?” Van Wingerden said.

It stung Wallace’s Midwestern sensibilities, even after 25 years of living in the South, to think Saturday’s wet, non-threatening snow hurt attendance.

“I just wish it hadn’t snowed,” he said.  “… We didn’t go crazy trying to promote it, but we did enough that people knew about it.”

Radio station 103.7 The New was on site. Food trucks were outside. Circus Academy of Concord provided physical things for the kids to try that were similar to circus stunts.

Wallace and Van Wingerden were appreciative of the popular Harwood’s agreeing to appear, especially since he also was scheduled for a Saturday night performance in Statesville.

‘This building is so big,” Harwood said as the band was heading into its last songs, “that we need to bring everybody up toward the stage.”

Van Wingerden said she thinks the former mill property could hold other events such as flea markets, antique shows, car shows and other types of festivals. It’s easy to move large vehicles in and out of the space. Fences provide plenty of security, and they have ample parking and room for outdoor events, too.

“The city has been awesome in helping us,” Van Wingerden said. “Hopefully, we can keep it going.”

Town board members and employees were excited, Mayor Mike Mahaley said, when they heard Wallace had bought the property, Like many Southern towns, the mayor added, Landis was faced with questions about what to do with an abandoned mill site.

“He’s really interested in the community,” Mahaley said of Wallace. “The way he talks, he’ll have another (festival).”

Wallace remains open to any ideas for the property — from all kinds of future events to even making it an industrial employer again. He said he was appreciative of Harwood and Gerry Wood Auto Group believing in what they are trying to do in Landis.

“We’re excited,” Wallace said. “I guess we’ll let the public decide what they think of it.”

1. This past Tuesday, Al Heggins was chosen by her Salisbury City Council colleagues as mayor, making her the first... read more