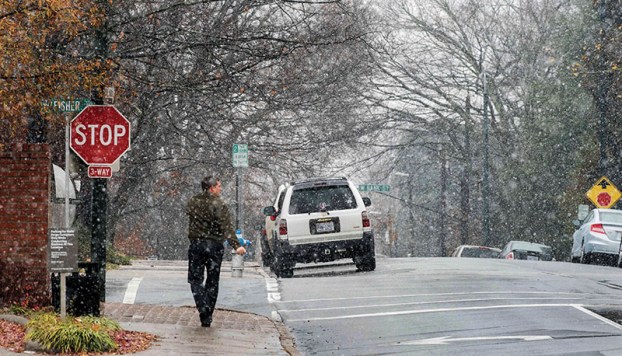 SALISBURY — This season’s first bit of snow has N.C. Department of Transportation crews on standby for the next 36 hours. They may have more work to do than expected.

Snowfall began in Salisbury around 1 p.m. on Friday with a mix of rain and got heavier as the day wore on. Officials say it could continue until noon Saturday.

By 4 p.m., roads in the western part of the county were getting snowy and dangerous, one driver said. Roads are icy in the Mooresville area, which has gotten more snow than Rowan.

Steve Monday, forecaster for Rowan County Weather, said the storm could lead to trace accumulations of up to 2 inches on surfaces other than roads.

“I checked the road temperature early this morning,” said Hedrick on Friday. “It was in the mid to upper 40s.”

Monday said that snow accumulations would only occur on grassy areas, but that’s already been disproved in some areas.

The roads will stay wet, he said, even as temperatures drop down to around 32 degrees.

DOT crews will remain on-call throughout the night and early morning hours. Trucks are ready to go with salt spreaders and plows.

Hedrick said the local DOT is waiting to see how weather predictions translate into reality in the Rowan-Salisbury area.

North Carolina is one of the northernmost areas affected by Winter Storm Benji.

Benji began early Friday morning with snow as far south as Brownville, Texas. Corpus Christi, Texas saw an accumulation of up to 4 inches of snow on elevated surfaces.

For now, Hedrick said, staff is waiting by the phone to address problem areas as local law enforcement officials identify them.

“Between contract and state DOT vehicles, we’re pushing 30 trucks here,” Hedrick said. “We’re ready to respond if anything does happen.”