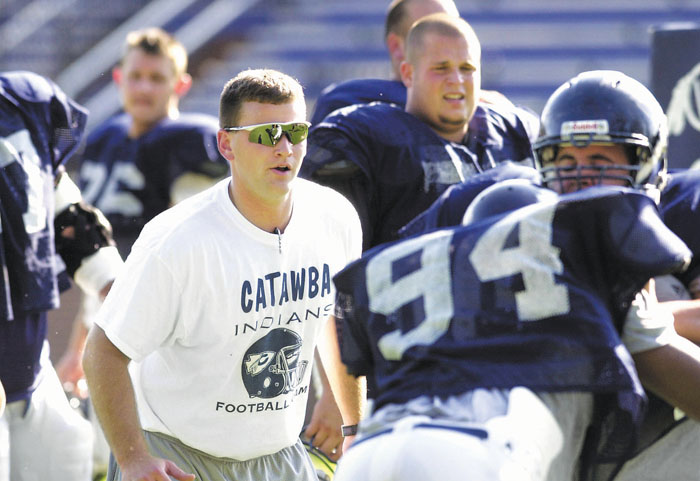 Jon C. Lakey file photo/Salisbury Post ... In a file photo from Sept. 27, 2003, Catawba offensive line coach Mike Bloomgren, left, conducts a drill at practice. Bloomgren, who has been at Stanford the past seven years, was named the head football coach at Rice University on Thursday. Current West Rowan football coach Joe Nixon is visible in the background.

HOUSTON — Mike Bloomgren has been hired as the head football coach at Rice.

Rice announced Wednesday that Bloomgren agreed to a five-year contract with the Owls after spending last season as the associate head coach and offensive coordinator at Stanford.

Bloomgren, a former assistant coach under Chip Hester at Catawba College, takes over for David Bailiff, who was fired on Nov. 27 after Rice finished 1-11 in his 11th season.

Bloomgren worked at Stanford for the last seven seasons. He was the offensive line coach from 2011-12 before taking over as offensive coordinator in 2013.

“In my seven years at Stanford, I have seen firsthand how elite college athletics and academics can not only coexist, but thrive together,” said Bloomgren. “I want to create an environment at Rice where every player’s dreams are realized on and off the field.”

Stanford’s offense has been consistently one of the nation’s best during Bloomgren’s time with the Cardinal, as his unit has continued to rewrite the record books. In 2016, the Cardinal set single-season school records for top rushing tandem (2,386 — McCaffrey and Bryce Love), and the individual single-game school record was set for rushing yards (284 — McCaffrey at Cal). That same season, the Cardinal ranked 17th nationally in time of possession (32:46), while McCaffrey ranked first in all-purpose yards per game (211.6), fourth in rushing yards (145.7) and 20th in rushing yards per carry (6.34).

A native of Tallahassee, Bloomgren earned a bachelor’s degree at Florida State in 1999 and launched his coaching career there, as an undergraduate assistant for Bobby Bowden. Bloomgren then earned a master’s degree in higher education from Alabama in 2001, working on the coaching staff under both Mike Dubose and Dennis Franchione.

Hester hired Bloomgren at Catawba in January of 2002 as offensive line coach. Bloomgren coached at Catawba for three seasons, rising to co-offensive coordinator in 2004.

Bloomgren was at Catawba during Hester’s first three years as head coach and the Indians had records of 8-3, 9-2 and 7-4. Catawba went to the Division II playoffs in both 2002 and 2004.

Bloomgren left Salisbury for another Division II school, Delta State, in 2005, and was at the Mississippi school for two seasons.

Bloomgren then moved on to the NFL in 2007, as offensive quality control coach. He was with the Jets through 2010, assisting offensive coordinator Brian Schottenheimer.

Bloomgren joined the Stanford staff as offensive line coach in 2011.

Bloomgren and his wife, Lara, have two sons, Tyler and Parker.