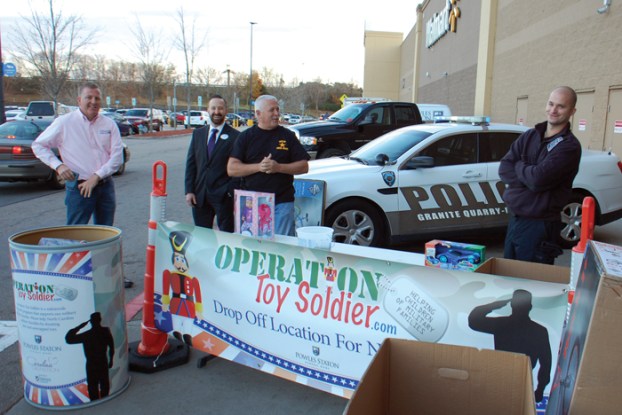 Russ Roakes and Matthew Staton, both of Powles Staton Funeral Home, along with Lt. Mike Brady, center, of the Rowan County Sheriff's Office and officer Richard Tester, right, of the Granite Quarry-Faith Police Authority were volunteering Friday at the Operation Toy Soldier collection spots outside of Walmart. The collection points will be at Walmart around the clock until 8 p.m. Sunday. Mark Wineka/Salisbury Post

SALISBURY — When Stephene Sartin started her dinner break during her Walmart shift early Friday evening, she went directly to the toy department.

When Sartin had paid for the items, she walked out of the main entrance, took an immediate right and deposited the toys into a waiting Operation Toy Soldier barrel.

Throughout the day Friday, people visited the Operation Toy Soldier tables outside the Walmart entrances and left new, unwrapped toys with volunteers at the collection points.

If they didn’t bring toys, they left cash, which will go to Toys for Tots.

The toy collection continues around the clock this weekend until 8 p.m. Sunday.

As it has in the past, the Rowan County Sheriff’s Office played a big role in providing the manpower for the three-day Walmart effort.

Lt. Mike Brady serves as ringleader for the Sheriff’s Office.

By the time this weekend’s toy collections at Walmart are over, personnel from the Sheriff’s Office, Salisbury Police Department, Granite Quarry-Faith Police Authority, local fire departments and first responders in general will have participated.

Going into this weekend, Operation Toy Soldier collection spots throughout Rowan and various appreciation meals the funeral home has sponsored for veterans and law enforcement officers had already gathered 800 toys.

But the Walmart location is always the biggest.

“This is our No. 1 spot, without question, to raise toys,” Roakes said.

In Rowan County, Operation Toy Soldier will collect toys through Dec. 15. The new, unwrapped toys will go to the N.C. National Guard Family Readiness Program, which will distribute them to military families.

By Friday afternoon — the toy collection effort started at noon — five new bicycles already were among the items donated. Brady said a woman who brought significant donations such as bicycles and remote-controlled cars arrived Friday before the volunteers did.

“She was actually here waiting for us to set up,” Brady said.

Brady and others praised the cooperation they receive from Walmart and the support they see from Walmart employees such as Sartin.

Sherry Perry, a resident of Gold Hill, walked up to the Walmart collection point with a doll, toy car and children’s game for the barrel.

Her husband is a veteran, Perry said, “and I do it so all children can have a Christmas.”

SALISBURY — Donald Kesler’s self-published “The Hill of Gold” comes in at fewer than 100 pages, but it still has everything... read more