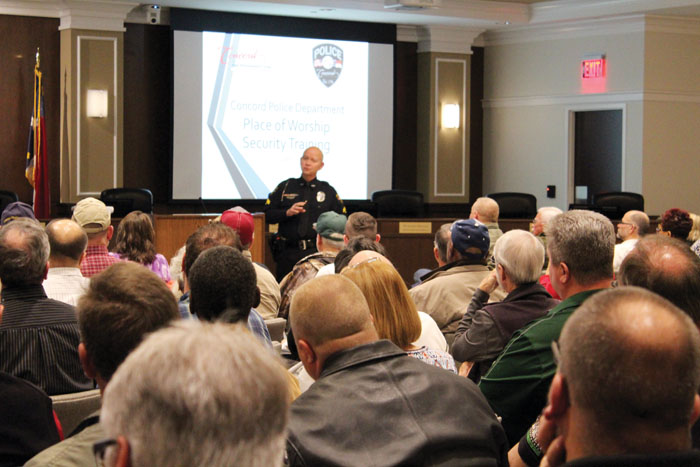 CONCORD — Just three weeks after the Texas church shooting that killed 26 and injured 20 others, Concord police are providing local churchgoers with information about how to protect themselves.

On Tuesday, the Concord Police Department held a meeting on security for places of worship.

“We live in dangerous times,” Gasek said. “… Churches, mosques, synagogues continue to be under attack across our globe. … Some of the recent attacks that we’ve seen are what I call game changers.”

Ferrell worked to make sure church leaders and worshipers are aware of their rights, as well as knowing what actions to take to prevent violent crime.

“Faith-based events and houses of worship, such as churches, synagogues and mosques, are inherently welcoming,” said Ferrell.

To illustrate, he cited roadside marquees, posts on social media and newspaper advertisements.

But with these open invitations for newcomers, how can churches legally shield their members from those who wish to do harm?

Ferrell said churches, synagogues and other places of worship are private organizations with First Amendment rights to peaceful assembly.

“You have the right to not permit those on your property who want to disturb your assemblage, destroy your property, frighten or do harm to your worshipers or their personal property,” he said.

Fortunately, there are steps to take that can reduce risks and provide safe faith-based gatherings.

Ferrell said that crime is a result of three factors: desire, ability and opportunity. Desire and ability are hard factors to counter, but vigilant, observant and outspoken churchgoers can remove the opportunity for perpetrators of violent crimes.

The biggest thing, Ferrell said, is to make sure that members and staff speak up when they notice something is different or suspicious. This is part of a trademarked campaign, “If you see something, say something.”

“Since ‘See something, say something,’ … our calls have gone up,” he said. “Is it aggravating sometimes? Yeah. … But guess what? It’s amazing how much crime reduces when people will actually talk.”

Suggested security measures for these teams include background checks for workers that interact with children or handle money, check-in systems, emergency action plans, investments in defibrillators and more.

A major point of discussion was a church’s decision whether to allow concealed handguns on their property.

If a site is marked as not permitting concealed weapons, only certified law enforcement officers are allowed to carry weapons there.

Ferrell’s own church is marked as such. While some members have complained, he said, the policy could prevent people from being accidentally shot or being mistaken as a perpetrator in an event of a mass shooting.

It is important, he said, to discuss plans and policies with attorneys and insurance agents.