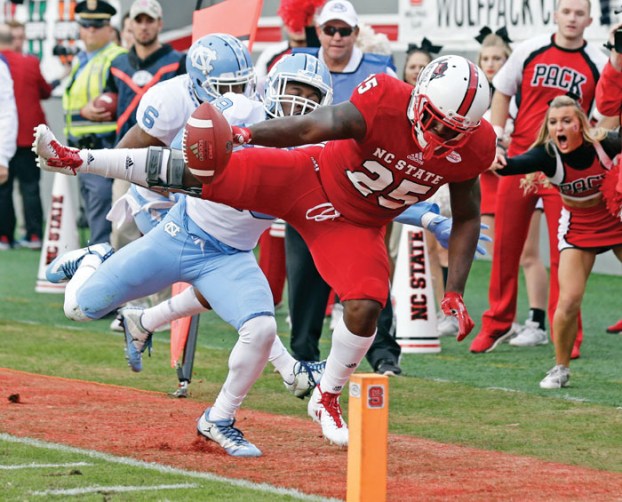 RALEIGH (AP) — Nyheim Hines recovered from a concussion just in time to give rival North Carolina a headache.

Jaylen Samuels added a game-sealing 10-yard score, and Ryan Finley ran for two short scores and was 20 of 30 for 204 yards. The Wolfpack (8-4, 6-2 Atlantic Coast Conference) bounced back from a brutally dramatic loss at Wake Forest and closed the regular season by winning two of three.

Hines was shaken up while returning a punt in the second half of that loss, and coach Dave Doeren said he was in the concussion protocol all week before finally returning to practice Friday. Doeren said his running back told him that “they’re going to have to amputate parts of my body” to prevent him from playing in this rivalry.

“Growing up here, it’s just really important for me to play in this game and I just knew I wouldn’t miss this game for anything,” the native of nearby Garner said. “I’d basically just have to break an arm or a leg not to play.”

In each of N.C. State’s last three victories, dating to a win at Pittsburgh in mid-October, Hines has come through with at least one long scoring play and he helped decide a largely disjointed, sometimes chippy renewal of the neighborhood rivalry in which the teams were flagged a combined 23 times for 235 yards.

“You knew it was going to be a spirited game,” Doeren said. “I thought we responded and played a really good football game in the second half. … Just hung in there until the offense got going.”

In this one, Hines burst through the right side and raced 54 yards into the end zone to put the Wolfpack up 19-14 with 40 seconds left in the third quarter. Then he ran 48 yards for another TD on N.C. State’s next possession, and the Wolfpack converted the two-point try to make it 27-13.

“There’s going to be some 1-yard, 2-yard, 3-yard rushes,” Doeren said, “and then, all of a sudden, (defenders are) going to get tired and you’re going to split them.”

Nathan Elliott’s third touchdown pass, a 1-yard toss to Jordan Cunningham, pulled the Tar Heels within six with 8:16 remaining. N.C. State chewed up nearly seven minutes on the drive that ended with Samuels’ score with 1:33 to play.

Elliott finished 21 of 45 for 277 yards for the Tar Heels (3-9, 1-7), whose two-game winning streak ended. He also threw TDs covering 51 yards to Anthony Ratliff-Williams and 24 yards to Michael Carter, with that one putting UNC up 14-6 early in the second quarter.

UNC: This wasn’t a season to remember by any means for the Tar Heels, whose roster was besieged by injuries but who did play their best in the final month — with victories over Pittsburgh and Western Carolina sandwiched by moral-victory losses to No. 2-for-now Miami and to the Wolfpack. Elliott, Ratliff-Williams and Carter once again showed why they’ll be the foundation of the offense going forward.

N.C. State: It looked shaky for about 2½ quarters, but credit the Wolfpack for not letting Wake Forest beat them twice. It helped immensely that they had Hines, who easily surpassed his previous career best of 115 yards set against Syracuse in September and broke the 1,000-yard mark for the season. He also helped the Wolfpack outrush UNC 292-83.

Hines added to an already full resume. Two weeks ago at Boston College, he ran 50 yards for the go-ahead touchdown midway through the fourth quarter of a 17-14 win. He also scored on an 83-yard run and a 92-yard punt return in a 35-17 victory at Pittsburgh on Oct. 14.

Reggie Gallaspy kept the Wolfpack’s game-sealing drive alive with a key conversion. With N.C. State facing a third-and-9 with about 2½ minutes left, he caught a swing pass from Finley in the left flat and made a move on one defender on his way to a 9-yard gain to the UNC 26 and a first down. Samuels scored three plays later.

Road teams had won the previous four meetings, and before this one, the last home team to win was North Carolina in 2012 — when Gio Bernard returned a late punt for the winning touchdown.

North Carolina: Will have to wait until spring practice starts in a few months.

N.C. State: Will sit tight until learning its bowl destination next Sunday.