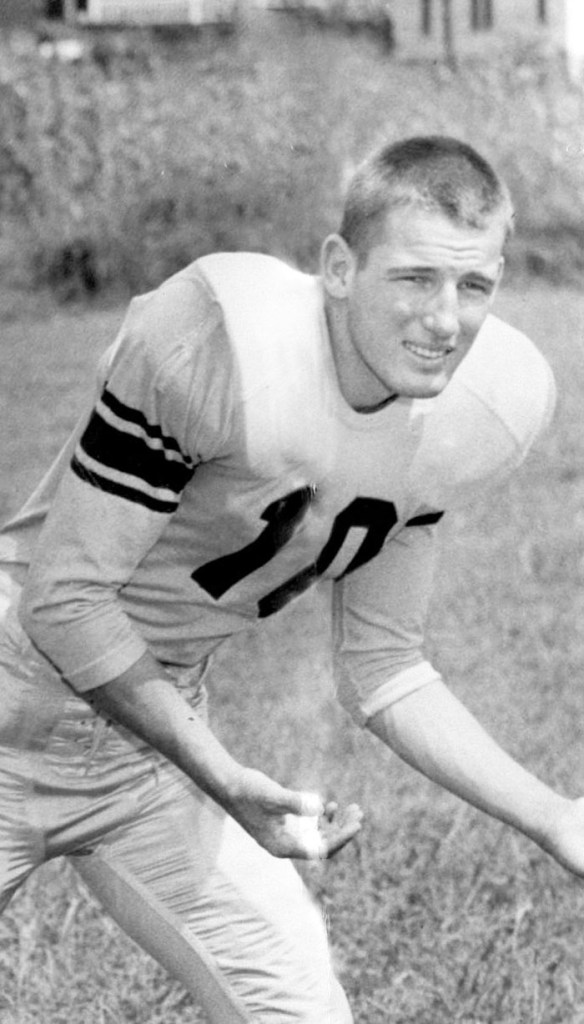 Salisbury Post file photo... Bobby Crouch, Boyden wingback, was the star of the 1957 3A state championship game. Crouch rushed for 171 yards and two touchdowns — in the mud — in the 21-0 victory over Fayetteville.

SALISBURY — November 22nd was the 60th anniversary of Boyden High’s 1957 3A football state championship, an overwhelming triumph achieved in a sea of mud at the venue we now call Ludwig Stadium.

Bill Ludwig, who coached Boyden before and after his service in World War II, piloted the 1957 Yellow Jackets and claimed his second NCHSAA championship in a three-year period. In 1957, Boyden would command the highest-scoring offense in 3A, as well as the No.1 defense.

The hero of the 1957 title game was the wingback in Ludwig’s single wing offense. His name was Bobby Crouch, and he would distinguish himself not only with 171 rushing yards and two touchdowns in the 21-0 thrashing of Fayetteville in a soggy title game played in front of 5,000 fans, but on the gridiron at The Citadel and in military service.

This was a rugged Boyden team (their practice field contained more rocks than grass) that would send a host of players to the college ranks, at least three to the University of North Carolina.

Eddie Kesler won the 1964 Jacobs Trophy as the finest blocker in the ACC when he was a 220-pound fullback for the Tar Heels, steamrolling holes for future Pro Bowl running back Ken Willard.  But in 1957, Kesler was Ludwig’s sophomore tailback. In the single wing, he triggered the offense. He did the passing if the Yellow Jackets needed to pass. A lot of times, they didn’t.

As powerful as Boyden was in 1957, it tied the A.L.Brown Wonders, 6-6, in a non-conference game on opening night.

After crushing Lexington 26-0 for its first win, Boyden faced a serious test, a road trip to play Wilmington New Hanover.

Ludwig had already scouted Wilmington and its star quarterback, Roman Gabriel, one of the state’s top players. Ludwig had watched the 6-foot-2, 210-pound beast put the ball in the air an unheard-of 31 times against Harding High.

So Boyden prepared diligently to rush the passer and made the long journey to Wilmington on a Thursday. They stayed overnight in a hotel and tried to get some rest for Friday’s game.

The weather was hot. So was the game — back and forth. Wilmington scored quickly, but George Knox, the powerful Boyden fullback who would go on to UNC, returned Wilmington’s kickoff for a touchdown. Crouch scored a TD.  Jim Edmiston, a guard who would  become an All-American at Lenoir-Rhyne, blocked a Wilmington punt that was recovered in the end zone by end Bill Allen for another Boyden score.

Boyden out-rushed Wilmington 277 yards to 149, but Boyden was 2-for-17 passing that day, and Gabriel eventually got the upper hand. Boyden’s UNC-bound tackle Sam Loflin recalled in a story in 2008 that even with Loflin hanging around his waist, Gabriel was winging missiles 60 yards in the air.

Boyden would suffer its only loss to Wilmington, a 26-20 non-conference setback, but it wouldn’t affect the big picture. Boyden would spend the rest of that season hoping for a second shot at Gabriel, but that didn’t happen.

After returning from Wilmington, Boyden destroyed Charlotte’s Central High, 34-0. Then came a 21-0 whipping of Winston-Salem’s R.J. Reynolds, the school had ended Boyden’s championship dreams in 1952.

“Crouch could run away from people, and Knox ran through them,” Loflin said. “Kesler had hands the size of fruit baskets, and they didn’t know if he was going to run or throw.”

Against High Point Central, Asheville and Greensboro Grimsley, Boyden’s tenacious defense made it five shutouts in a row.

Boyden ran audibles based on colors called out by blocking back Ed Julian. It quick-kicked often and played suffocating defense. When Boyden demolished Burlington Williams, 39-6, Ludwig’s team had clinched the Western Conference championship.

The regular-season finale for Boyden was at Gastonia’s Ashley High, and while the conference championship had been decided, Boyden’s goal was a perfect conference record, something even the 1955 state champs hadn’t been able to accomplish. Gastonia had tied Boyden, 7-7, on the last night of the 1955 regular season, although Boyden had won the rematch to take the Western Conference title.

In the Western Conference Player of the Year voting, Knox was first. Crouch was second. Loflin tied for third.

Wilmington had been expected to handle Fayetteville on the final night of the season to take the Eastern Conference, but Fayetteville managed a 7-7 tie with Gabriel’s team. Both finished conference play with 4-1-1 records. They were co-champions.

That meant a playoff game for the Eastern crown to determine Salisbury’s opposition in the championship game. It would be played at a neutral site in Goldsboro on Nov. 15. Interest in the outcome was so high in Salisbury that WSTP headed to Goldsboro to broadcast the game back home. An extra official also was dispatched. He would be tracking yardage. In case of a tie, total yards would determine the winner, not an overtime period. These were different times.

Over-achieving Fayetteville, coached by Raymond “Buddy” Luper,  wasn’t considered as talented as Wilmington or Durham, but it shocked everyone for the second straight week. Fayetteville ran back the second-half kickoff for a touchdown, contained Gabriel, and won the game, 13-7. Fayetteville, not Wilmington, would be coming to Salisbury.

Administrators anticipated  an overflow crowd of 7,000 for the championship game. Fayetteville had requested 3,000 tickets and parking spaces for nine buses. Temporary bleachers were erected at Boyden’s field. More bleachers were borrowed from Catawba College.

Advance ticket sales were brisk in Salisbury’s banks and stores, where the talk was about center E.C. Haithcock’s case of the flu and Torrence’s sprained ankle.

“The field was standing water, and I think it would have been called, but the people in charge didn’t get into town until late,” Loflin recalled in 2008. “But Coach Ludwig always told us we were good mudders, and we were. The single-wing was mostly power, a great offense for bad weather.”

The linemen were close to the same size, but Boyden’s backs were substantially bigger than Fayetteville’s scatbacks. Boyden dominated on both sides of the ball. Crouch broke loose for two long touchdown scampers, his 14th and 15th of the season. He would account for 171 of Boyden’s 291 rushing yards. Kesler rushed for 67, while Knox added 54. Fayetteville was held to 115 yards of offense as Boyden registered its seventh shutout in 11 games and won, 21-0. Boyden (9-1-1) allowed 4.7 points per game that season.

Crouch also would have productive days for The Citadel. In his three varsity seasons from 1959-61, the Bulldogs were 8-2, 8-2-1 and 7-3. Crouch scored five varsity touchdowns. He was the leading kickoff returner in 1959 and the leading punt returner in 1960. In 1961, he led the team with four interceptions.

After graduating from The Citadel, Crouch served as a second lieutenant in the Third U.S. Infantry, a crack unit known as the Old Guard. He was stationed in Washington, D.C.,  and was frequently tasked with the somber duty of conducting military burials at Arlington National Cemetery. On a clear, crisp November day in 1963, Crouch marched at the head of a 150-man honor guard at President John F.Kennedy’s funeral, six years, almost to the day of the great championship game.

Ed Dupree: Man of many endeavors was one of…