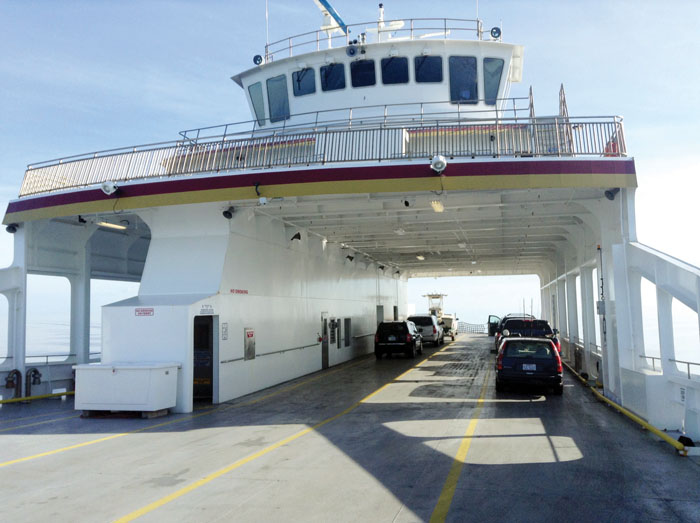 The Swan Quarter is the newest in North Carolina's ferry fleet. This was Freeze's transportation from Ocracoke to Cedar Island this morning, a 2 1/4 hour ride. The fee for the state of the art vessel was $3 which included the bike. Photo by David Freeze, for the Salisbury Post.

Editor’s note: Salisbury native David Freeze cycled the N.C. coast, riding up the Inner Banks and down the Outer Banks. The Post  chronicled each day of his ride. Contact him at david.freeze@ctc.net.

For some reason, I didn’t sleep especially well last night. I got up a little after 5 a.m. in the Bluff Shoals Motel in Ocracoke, ready to get the day going. The ferry to Cedar Island was set to leave at 7:30 a.m. and it was only a half mile away. If I missed the ferry, I couldn’t have made it back to Salter Path today. I cleaned the apartment, even bagged and carried out my trash. For the first time since Day 1, I added air to both bike tires. All my messages were caught up, so I left out a half hour early to ride the half mile to the ferry. My front tire went flat! It was fine just a few minutes before, so operator error had something to do with it. I pumped the tire back up and it stayed all day.

At the ferry, I could see that the boat was huge, way bigger than the previous ones on the trip. I paid my $3 fee for a person with a bicycle for the 2 1/4 hour ride and watched as just a few cars pulled into line early on a still and calm Saturday morning. We loaded with probably a dozen vehicles, one of them pulling a boat. I went upstairs and found an amazing passenger lounge on the nearly new ferry. The seats, huge windows, bathrooms and just general space were fantastic. For the small fee, I got all of this plus a dolphin sighting. The Pamlico Sound was as smooth as glass when we started and not much worse when we landed.

Back on solid ground, I had some serious pedaling to do. I wanted to be back at the Trinity Center Camp and Conference Retreat by 3 p.m. After the 23 miles by boat, I had 52 by bike to do in five hours against a stiffening headwind and building traffic. Mickie Whitley had watched my truck for nine days and I wanted to meet her before she left work.

So the pedaling began back at Cedar Island, a sparsely populated wildlife refuge area. I passed through lots of very small towns like Atlantic, Stacy, Davis, Williston and Smyrna. A few switches of direction made the wind lessen on occasion but closeness to the water and so much open marshy area didn’t slow it down much.

Beaufort was the first real town although it had the worst roads and least room to ride of any area in recent days. Beaufort also has the last big bridge to pedal over and it was without bike lanes. Tight enough for a little discomfort but I never got buzzed. At least I think that bridge belonged to Beaufort but Morehead City might have owned it.

Officially into Morehead City, the roads widened and traffic lessened on the way to the causeway and another good size bridge that was the entrance to Atlantic Beach. That is where I spent the night before the first day of riding.

The final push on the bike was about eight miles south on Fort Macon Road that became Salter Path Road. I pulled in at the Trinity Center at 3:08 p.m. and the official bike riding ended. It was great to meet Mickie. She got one of my new books and graciously invited me back when I had more time. Can’t wait!

My last sightseeing stop was a visit to nearby Fort Macon State Park. I had been in this area several times and never stopped. For the history buff, Fort Macon is a must see! The fort itself is owned by the State of North Carolina and there is an awesome presentation in place. The fort was used in the Spanish American War, by both sides in the Civil War and by the U.S. Military in World War II. Great detailed exhibits tell about building the fort, the various times of military use and how the men were housed and lived.

Tonight, I am spending the night in Lee and Tricia Johnson’s condo about a half mile from the Trinity Center. They were gracious enough to offer it just after this ride began. Tomorrow, I will head home after a good night’s rest. Plus you really can see the Cape Lookout Lighthouse from their deck.

With today’s final pedal stroke and the visit to Fort Macon, I can look back on a wonderful nine days and just a tad over 500 miles counting ferry rides. Even with the wind and cold, this was fun. I took time to visit so many new places and got a good feel for the Crystal Coast, Inner Banks and of course, the Outer Banks. The scenery was magnificent, the history amazing and the people are just what I hoped for. Genuine, realistic and friendly!

Going in colder weather worked out, made for better motel pricing and less traffic. Physically the challenge was more reasonable this time, largely because riding slightly lesser miles without temperature extremes worked well.

Thanks to the Salisbury Post and Father and Son Produce for sponsoring this adventure. And of course to all the readers for following along, offering prayers and suggestions, just as you usually do. I hope it won’t be long until I am back on the road and we can all go riding again!