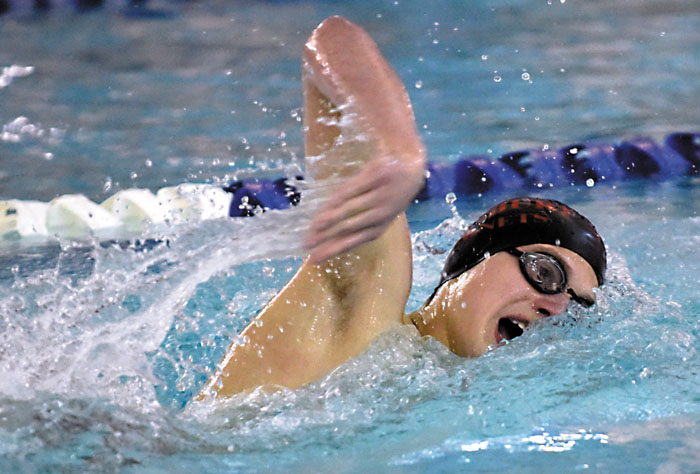 SALISBURY — Some high school student athletes commit to colleges months in advance and signing day is just a formality.

That was not the case for Salisbury High swimming star Ethan Knorr.

“I’ve kind of been browsing schools for a while but I visited ECU two weeks ago and just fell in love with it,” said Knorr, surrounded by family and friends in the school’s media center. “The campus is great, the academics are what I’m really looking for and athletically, the program has notoriously been one of the best. I wanted to go somewhere where I can be successful.

“It came down to those three schools,” continued Knorr, who also visited Georgia Tech and Alabama and received many offers from other programs. “I did not want to stress about it …  just wanted a place where I knew that I’d be successful.”

Knorr also swam a leg on Salisbury’s 400 freestyle relay team, which placed third in 3:25.68, and its 200 medley relay (7th in 1:46.34), helping the Hornets finish eighth in the state. “His leadoff leg in the 400 free relay would have won the 100 (freestyle) in this year’s state meet,” Salisbury coach Ryan Starrett said at the time.

“ECU got a steal and they know it, too,” said Herndon, who also swam for the Pirates. “He’ll do well there. East Carolina has a great program and great academics, so he’s excited about swimming there. I think he’ll rise to the top of the charts at ECU and has a chance to do some really cool things.”

Starrett echoed those sentiments. “I’m excited for him to go to college because he’s just going to excel even more,” he said. “He absolutely has the ability to improve even more, when he starts doing doubles and they throw in all the dry land workouts that they do in college.

“Those programs have one purpose, to make you a better swimmer,” added Starrett. “I’ve seen a lot of kids go to college and then start turning out some phenomenal times. With his work ethic, he’ll be fine.”

Mondays through Saturdays, Knorr makes the trek to Greensboro for practices with Herndon. A couple of times a week, he’ll swim at the Salisbury Y, because “waking up every day really early is kind of rough.” But the drives to Greensboro have been worth it for Knorr.

Knorr is in his third season with Herndon and the Makos, a year-around USA swimming club.

“Ethan is a workhorse with unlimited potential,” said Herndon. “He is already a state champion twice over and a state record holder, so he’s already accomplished in his own right. I think he’s going to have an even better high school season this year. He definitely puts the work in. Anything over 200 yards is his strength. Any race that lasts more than a minute, he just gets stronger and stronger as the race goes on — that’s something he thrives in.”

Knorr hopes to lead Salisbury to another Central Carolina Conference championship, though the league has added new members in North Davidson, Ledford and South Rowan.

“I want to help the team win and really grind out some best times over last year, because I know I have a lot left in the tank,” said Knorr. “I know the harder I train, the better I can get.”

Starrett says the Hornets’ roster is bigger and ready for this season’s challenges.

“Our relay team that placed third in the state (Knorr, Roarke Burton, Joe Steinman, Keegan Dillon) — we didn’t lose anybody … they’re all back,” said Starrett. “We’re excited about this year’s team. We even have nine more swimmers that last year.

“North Davidson may be team to beat in the conference, coming down from 4A,” continued Starrett. “South Rowan, sometimes in the past, has had an advantage by their roster numbers, but because they are now 2A like us, there are limitations on number of entries, so that should bring more competition.”

Ethan is the third of five swimming Knorr siblings. A sister (Allie) and brother (Stefan) came before him and twin sisters, freshmen Emily and Katie, are on the Salisbury team this year. Ethan credits Stefan with getting him started and calls himself a “serious swimmer” by the age of 9, because he realized he “was pretty good at this.”

Good enough for Coach Matthew Jabs at East Carolina, a place where Knorr is looking forward to calling his four-year home — nine or so months from now.

“I want to make an impact as a freshman,” concluded Knorr, who wants to major in the science/chemistry area. “Where the ECU swimming program is going, and with the amazing academic opportunities there, it’s just a great fit. I want to be successful in all parts of my life and I believe that’s something I can accomplish there.”