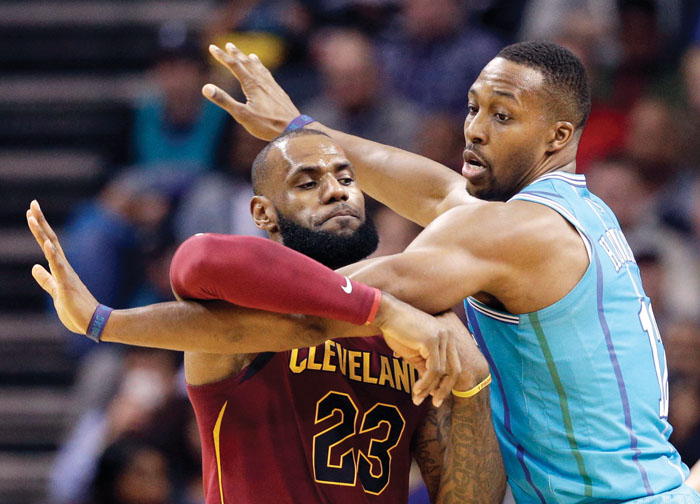 CHARLOTTE (AP) — LeBron James scored 31 points, Kevin Love had 22 points and 10 rebounds and the Cleveland Cavaliers continued their dominance against the Charlotte Hornets with a 115-107 victory Wednesday night.

The Cavaliers have won seven straight against the Hornets and 11 of 12. James is 40-6 in the regular season against Charlotte.

Kyle Korver’s 3-pointer with 1:06 left in the third quarter put the Cavaliers ahead for good at 86-84. They extended the lead to 10 points three times in the fourth quarter, first when James drove into the lane and hit a stepback baseline jumper to make it 105-95.

Jeff Green added 13 points for Cleveland, Korver had 11 and J.R. Smith 10. The Cavaliers have won three straight and four of five.

The loss was Charlotte’s fifth in a row since a five-point win at Milwaukee on Nov. 1. Michael Kidd-Gilchrist shot 10 of 14 from the field and led Charlotte with a season-high 22 points, three shy of his career best. Point guard Kemba Walker had 20.

Hornets guard Nicolas Batum played his first game of the season after a tearing a ligament in his left elbow last month. He started and scored 16 points in 32 minutes, including seven straight in the second half as the Hornets took a 58-52 lead.

Hornets center Dwight Howard, who entered averaging 14.4 points and 13.1 rebounds, was limited by foul trouble and played just 23 minutes. He finished with eight points and five rebounds and fouled out with 24.5 seconds left.

Cavaliers: Derrick Rose (left ankle sprain), Isaiah Thomas (right hip) and Tristan Thompson (left calf strain) did not play. … James went to the bench with his fourth foul at the 3:31 mark of the third quarter after being called for two charges in less than a minute. Walker drew the first one, Kidd-Gilchrist the second. The Hornets led 82-79 at that juncture. … James scored in double figures for the 806th straight game. It was his 404th career 30-point game. … J.R. Smith hit his 1,800th career 3-pointer in the first half.

Hornets: At Chicago on Friday night.