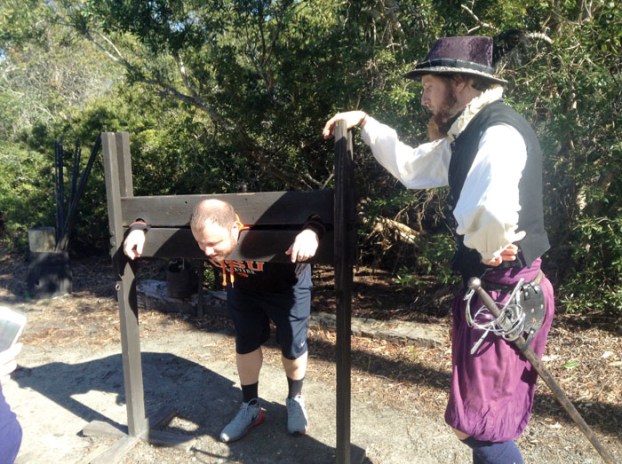 A visitor to the Roanoke Island Festival Park in Manteo was placed in a pillory like the type that would have been used on Roanoke Island at the English settlement in the late 1500s. David Freeze/For the Salisbury Post

David Freeze: A sightseeing record but still couldn’t see it all The Roanoke Marshes Lighthouse is the centerpiece of the Manteo waterfront. This lighthouse, just like the one at Plymouth, was a screw pile type. It was an anchored in Croatan Sound and was renovated and opened in it’s current location in 2004. David Freeze/For the Salisbury Post

Overnight, I planned how to see most of the points of interest between Kill Devil Hills and Roanoke Island. Of the 29 sites listed as must-see on the Outer Banks, 12 are on Roanoke Island. I knew I couldn’t see them all Wednesday, but I planned to do my best.

First up, I checked on the only year-round location of Duck Donuts and found it just 0.3 miles from my overnight accommodations at Cavalier by the Sea.

The basic premise is that the doughnuts are cake doughnuts with one of at least a dozen specially themed toppings. I got a blueberry something, a French toast one and a pumpkin variation. With only three doughnuts, I waited in line to get mine in a box just like those who ordered a dozen. I ate two for breakfast while still hot and rated them very highly.

Next was a visit to Jockey’s Ridge State Park, the highest sand dunes in the United States. I had turned the wrong way and had to backtrack to find the park where hang gliding is taught daily. It must have been too windy Wednesday because the instructor left the park ahead of me.

The visitors center is powered by a wind generator, and the facility needs no additional power.

Jeannette’s Pier in Nags Head has been built and rebuilt many times because of severe weather but is now operated by North Carolina Aquariums. There is a large aquarium right inside the door and a portion of the facility is used for teaching.

Jeanette’s Pier is currently the best built pier that I have ever seen and also uses wind generators for power. They were spinning hard Wednesday.

Within sight of the pier is U.S. 64, which is the main road to Roanoke Island and Manteo. One of the pier staff members was concerned about me cycling over the bridge but this one was pretty tame compared to the others on this trip.

First stop was the Manteo waterfront with the Roanoke Marshes Lighthouse. The boardwalk around the marina is really cool with sailboats tied up just beside it. Waterfront Manteo is chock full of cool little shops and stores and couldn’t be prettier.

I could see the Elizabeth ll tied up across the waterway and wondered how to see it. I noticed a couple of cyclists pedaling over the waterway bridge so I followed them.

What I found was the Roanoke Island Festival Park. The park has the Elizabeth ll, a replica sailing ship of the type used by the English when the colonists were brought to the area. Also, there is an authentic Indian village and English settlement.

The museum on site covers all the major happenings of the island, including the Lost Colony, Fort Raleigh, a Civil War battle, a freedmen’s settlement, early radio transmissions and, of course, pirates. I definitely missed listing a few things because there is so much.

Then it was on to the Manteo Airport, where I wanted to stop and see the museum that honors the Civil Air Patrol and their efforts during World War II in hunting for German submarines. Aviators flew underpowered Piper Cubs during the search and eventually fixed a small bomb to the undercarriage of the plane.

Many of the men didn’t make it back because the planes, often privately owned, couldn’t handle the harsh winds of the area. One of those pilots was 1st Lt. Otho Corriher of Landis. I saw a photo and several references to his service during 1942-43.

Just outside the airport was the first monument that I saw to the freedmen’s colony. Once the Union Army defeated the Confederate forces and occupied the area, word spread among the slaves that freedom was available on the island. The slaves worked for and then enlisted in the U.S. Army during the last two years of the war. Many of the families still live in the area.

My final stop for the day was Fort Raleigh National Park, site of the Lost Colony settlement, a small earthen fort and where the Civil War battle was fought. Last thing was a nature walk that included the site of the summertime “Lost Colony” outdoor drama presentation.

I spent Wednesday night in the Elizabethan Inn in Manteo. I had a nice talk with the manager and we agreed on a great price for a wonderful room.

Today, my first major stop should be the Bodie Island Lighthouse and then I will head  to Rodanthe and the Cape Hatteras National Seashore.

Thanks again for the Salisbury Post and Father and Son Produce for allowing me to make this journey. And thanks to the readers for the communication along the way.