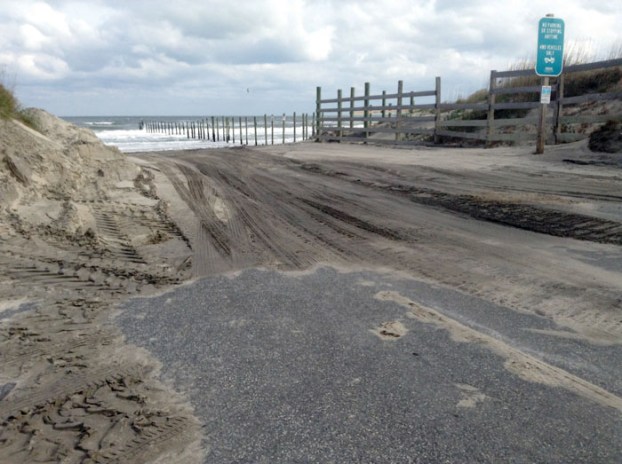 This is the northern end of N.C. 12 at Corolla. Only 4 wheel drive vehicles use the beach past this point, Highway 12 is the main road for most of the length of the Outer Banks. David Freeze/For the Salisbury Post After a fantastic oceanfront evening at the Cavalier by the Sea in Kill Devil Hills, I woke up to winds howling against the bathroom window and huge waves crashing outside my door.

I could see the nearest flag straining against its flagpole. Trouble was, I had to ride into the teeth of that wind to get to Duck and Corolla, almost 30 miles away.

I spent four and a half  hours making the trip at a very slow pace.

The first town was Duck, another of those great little towns with plenty of shops and water sports. Duck has a bike path through town that runs right beside N.C. 12. Workers were putting in new ramps Tuesday where it crosses city streets. I just rode in a decent bike lane on the side of the road.

I did look for the famous Duck Donuts store after an endorsement by Sharon Ritchie. Just as lots of other businesses, it appears that the stores in Kitty Hawk and Duck are open only Wednesday through Sunday, and the one in Corolla is closed for the winter. The one in Kill Devil Hills is open all year and I will look for it today.

After finally completing the trip against the wind to Corolla, I got off the bike to check out the Currituck Beach Light Station and immediately met the site manager, Meghan Agresto.

Meghan is one of those super lively people who was so much fun that I truly enjoyed the time with her. We discussed lots of things in a short time, including her plan on how to find better politicians and the real scoop on Duck Donuts.

Eventually, I climbed her lighthouse and totally loved the experience. The lighthouse was the last major one built on the Outer Banks and continues to work to this day. It was so windy on the top platform that I didn’t stay long. Corolla, at the northern tip of paved highway 12 on the Outer Banks, was able to reopen the local school building. Currently there are 34 students in K-8 and there are 4 teachers. It is the smallest public school in North Carolina. David Freeze/For the Salisbury Post

Nearby was another interesting story. The smallest public school in North Carolina is a restored building in a historic village next door to the lighthouse. Kids from kindergarten through eighth grade can now attend school locally rather than take a 90-minute bus ride to other Currituck County schools across Currituck Sound. Today, 34 kids use the school and are taught by four teachers. It was really cool to see them outside the building Tuesday afternoon.

A lesser goal was to see the Corolla wild horses. I rode to two areas where they are occasionally seen, but no horses were there Tuesday. I spoke to a deputy sheriff who told me the horses have about 11 miles to roam between Corolla and the Virginia line.

My return trip to Kitty Hawk and Kill Devil Hills took only about half the time that the trip north took in the morning. The gusty breeze behind me was glorious.

Just before dark, I began looking for a place to stay and found several older motels closed for the season. At one point, the wind was so strong that I hardly had to pedal the bike.

In a fortunate sequence of events, I got off the bike just as the sun was setting. I stopped for a pineapple milkshake at Dairy Queen (only a small because it is still cold). Then I stopped at a bike shop to get my chain oiled for free and decided to again spend the night at the vintage 1949-built Cavalier by the Sea.

So I ended up back there again at one of the best motels of my experience, and that is a lot of motels counting the bike rides. I even got a slice of cake at check-in. If in the area of the Wright Brothers Memorial, you would enjoy this motel.

Today, I am headed south and expect no more headwinds and a slight warming trend with at least a chance of rain. Roanoke Island and Manteo are planned stops.

Tuesday was Day 5, and now I’m over 300 miles completed for the trip.