David Freeze: Watching the ocean from my front door 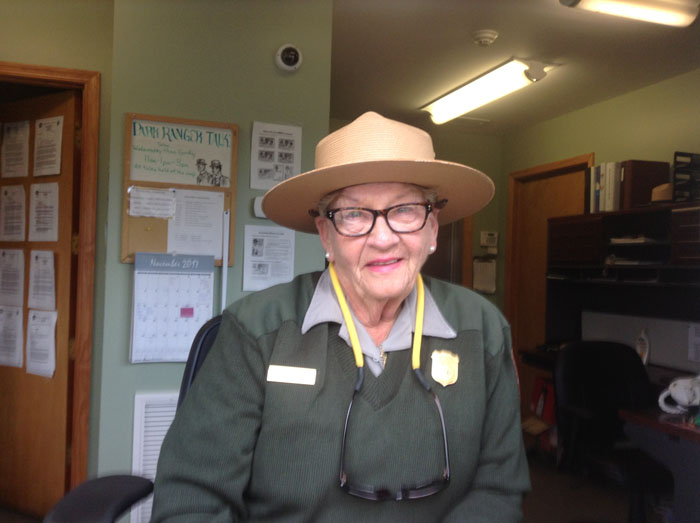 Park Ranger Mary Crocker filled me in on the area upon arrival at the Wright Brothers Memorial National Park. My senior pass was worth free admission again. David Freeze/For the Salisbury Post

I kept expecting to hear it raining Sunday night, but it never did. The weather guy said a front was coming through and the worst of it would be over by 9 a.m. and then we would get some late-day sun.

My goal was to find U.S. 158 and head east, then south all the way to Kitty Hawk, my starting point for Outer Banks exploration.

Heading out of Elizabeth City was easy, thanks to the great directions from the motel staff. I just made it across the Pasquotank River bridge ahead of the barricades coming down and the drawbridge going up. Always amazed to see the bridges work, I watched until the boat had passed by.

Traffic was fairly heavy as the rain started to fall but the shoulder was just big enough that I could stay out of the lanes. I passed through several little towns, including Belcross, Barco, Grandy and Powell’s Point, and several long sections of swampland on both sides of the road.

The only highlight of the morning was the significant rain that lasted until well after noon. Very wet and cold, I stopped at a 7-11 and went in to find something warm to eat and try to get my fingers moving. The temperature was a windy 48, and my first gloves got soaked. Two plastic bags wrapped around my mittens kept them dry until the rain stopped.

The final challenge was the long ride over the Currituck Sound bridge with the wind blowing from the north, which made it my left side. A few gusts pushed me as close as I wanted to be to the guardrail, and I was sure glad to finally exit that thing.

Kitty Hawk and my first visit to the Outer Banks were just on the other side of the bridge. I found the nicest visitors center that I have seen stocked full of way more pertinent material than I can read. My goal is to research enough about what is coming up to stay ahead and not miss anything.

Most of my ex-wives and one coulda-been said one of my faults was trying to see everything. Is that really a fault?

Listening to some other tourists in the visitors center made me think that I could ride on down to the Wright Brothers National Memorial and see that before I found a room with a good heater. I met Ranger Mary Crocker, who took the time to tell me about what I could see and a little about the area. I gave Mary my National Parks Senior Pass (which now costs $80 but I think only cost me $10 a few years back) and saved $7 more. That pass has sure come in handy.

The visitors center at the park is under reconstruction and has been for more than a year. The gift shop had a few things but we couldn’t see the scale model of the plane. I did climb up to see the memorial and also saw replicas of the Wright Brothers’ living quarters and hangar space on the park grounds.

The wind was blowing about the same Monday as it was on Dec. 17, 1903, when the brothers succeeded with four flights. The starting point and distances of each flight are marked on the runway. The fourth flight lasted 59 seconds and stayed aloft for 852 feet.

Mary pointed me toward my chosen Cavalier Motel, one of those special older ones where I plan to stay for the rest of my time on the Outer Banks. I have an oceanfront room, meaning that one step off the porch is on the beach. The waves are about 120 feet away.

I met a World War II Navy veteran at check-in who told me this motel is a special place. He and his wife checked into a nearby room.

My plan for today is a ride north up N.C. 12 to Corolla, as far as the road goes. I have been reading about the special things there and am excited about seeing the area.

From this point on, I will just take as long as needed to see the main things. None of the ex-wives are along.

This has been fun so far and has covered about 230 miles. I hope you are enjoying riding along.