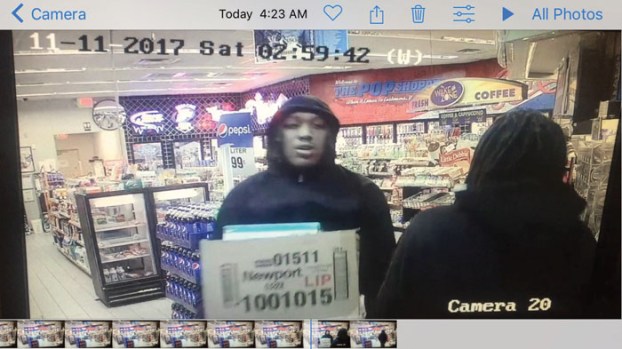 Salisbury Police Department Surveillance video shows a picture of the suspect in the robbery at the Pop Shoppe on West Innes Street. Salisbury Police Department The car believed to be involved in the robbery at the Pop Shoppe on West Innes Street.

SALISBURY — Two men stole 60 cartons of cigarettes from The Pop Shoppe at 1831 W. Innes St. early Saturday, according to the Salisbury Police Department.

Two suspects entered the store at 2:50 a.m., police said. One walked near the office, circled the store and walked out. The other tried to use a debit card that would not process, then walked out.

The first suspect came back in, went to the office, picked up two boxes of cigarettes and started to walk out of the store. A clerk confronted him.

The man dropped the boxes, reached for his waist and said he had a gun. The clerk backed away, and the robber picked up the boxes and ran out.

The second man was waiting in a dark colored Chevrolet Impala. The men left the parking lot traveling east on West Innes Street.

The first suspect is described as a black man with blond-tipped dreads. He has a medium build and was wearing a black hoodie, dark green jeans and white sneakers.

The second suspect was described as black man wearing a gray hoodie and dark jeans.

Tips may also be submitted online at http:/tips.salisburyrowancrimestoppers.org.