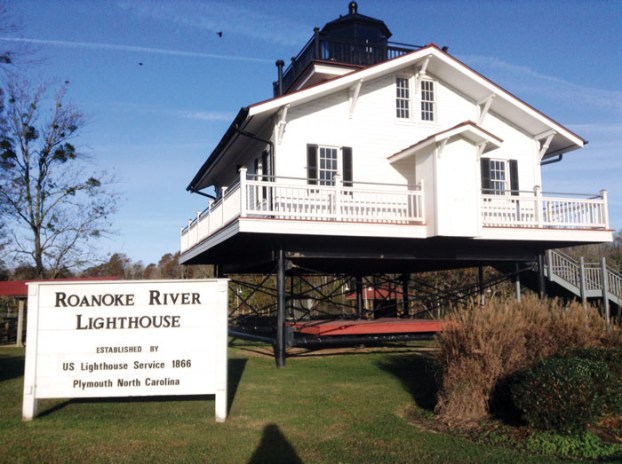 This is a replica of the lighthouse on the Roanoke River in Plymouth that was first used in 1866. the new lighthouse appears to be a gathering spot for city events. Photo by David Freeze, for the Salisbury Post.

Riding on the coast: Lighthouse among Plymouth’s historic charms

Last night in Plymouth was one of those nights that I just couldn’t get warm until after a long hot shower. The biting cold of the day left its mark. Today was forecast to be better and it was. While only slightly warmer at dawn than yesterday, the wind was calm. A bright day with clouds late was the forecast. While the winds never were as harsh, afternoon clouds brought a near calm.

My evening in the Day’s Inn was quite nice and the conversation with desk clerk Nicole was enjoyable. There have been few opportunities for the kinds of interaction that I usually have. The cold probably plays a part because people are still talking but only while they keep moving.

I rode into historic downtown Plymouth first thing this morning and checked out the waterfront. The stores on Water Street are making good use of their backside with a boardwalk in spots and a very nice view of the Roanoke River. I saw the lighthouse in this area a few years ago and thought it was a renovated version of an original. I found out today that the lighthouse on display now is a replica. No wonder it looks so new. The original was first anchored in the water in 1866. This one sits on land.

During the Civil War, a fort in town was held by the Union troops until the Confederates captured it in April 1864. Residents in town hid in a nearby house that still remains, complete with bullet holes, A memorial honors all who died, soldiers and civilians.

Plymouth is a very cool town. There are so many historical houses. It also claims to be the home of the last two two world record black bears. The folks from this past summer’s visit to Glidden, Wisconsin, ought to get together with the black bear enthusiasts in Plymouth.

I left Plymouth on SR 32, singing my usual Sunday morning hymns. Passing through Roper and Pleasant Grove, I got plenty of waves from the few cars on the road. Next came the long ride across the Albemarle Sound bridge. Surprising to me, the wind was not a factor. Signs warn cyclists about the crosswinds and the low guardrails. I wonder if any cyclists have been blown off the bridge, as it certainly seems possible. A one of a kind S bridge spans the Perquimans River in Hertford. Photo by David Freeze, for the Salisbury Post.

Next came Edenton, which I only skirted because I have been there before. My goal was to follow US 17 North and go see Hertford. I knew it had a one of a kind S bridge over the Perquimans River. It is a beautiful old bridge and really is shaped like a lazy S. There is a drawbridge that I bet isn’t used often as it was not manned while I was there. The website for the town says something about Hertford being from another easier paced era. I have never seen so many historic homes in a small town. The oldest brick home in the state was located nearby and is still open for tours, but I didn’t go find it.

Another reason that I wanted to visit was that the town honors favorite son Jim “Catfish” Hunter, a Hall of Fame baseball pitcher. Hunter was the first free agent baseball player ever and signed with the New York Yankees. He had a storied career that included a perfect game but sadly died very young from Lou Gehrig’s Disease. The town has honored him with a memorial in the town green, a street beside the local high school and a huge bridge over the river on US 17.

With almost no wind and clouds coming in, I rode on into Elizabeth City, my home for the evening. I am in an Econolodge because of a good price and a fantastic central location. Burger King is just across from the back of the motel and two veggie burgers made up my evening meal.

Today not only had improving weather, it had some unusual things too. With all the cotton moving about, many of the roads had cotton bales along them. Plenty of farming was going on, mostly harvesting of soybeans in wet fields ahead of more rain tonight. The smell of wood smoke was everywhere today, always nice during the cold weather. The cable broke on my back brakes but it isn’t a big deal on flat land, my favorite kind.

Tomorrow, I will head east on SR 158 before turning south on the same road along the Currituck Sound. I will be just about 15 miles south of Virginia before that turn south. I plan to see as much of the Outer Banks as possible, probably beginning Tuesday. Monday is projected to be wet early and improving later. Winds should eventually be at my back.

Thanks to the Salisbury Post for covering another adventure and to Father and Son Produce for being my primary sponsor. I wish I had a Twin Bing this evening.

Ride along tomorrow as I get close to the Outer Banks. I have plenty of homework to do to make sure we don’t miss anything! See you then!

Following through: Gerry Fitzpatrick closes in on pledge to make 100 quilts for veterans

ROCKWELL — When Geraldine “Gerry” Fitzpatrick makes a promise, she keeps it. About a year ago, Gerry pledged to sew a... read more