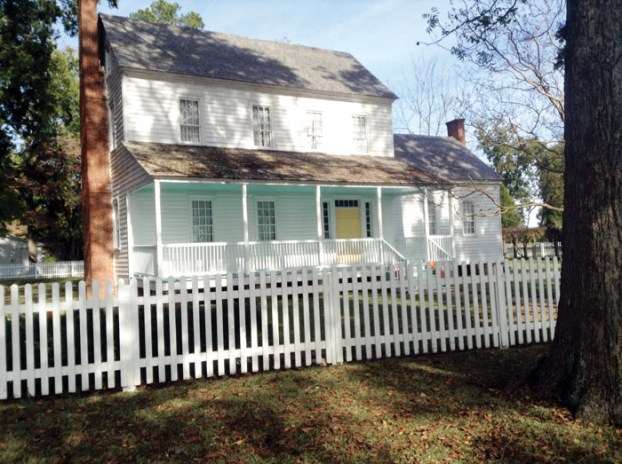 This is the 1820s Bonner House which sits on Bonner Point, the corner of Main and First streets in Bath. Bath is the oldest town in North Carolina. Photo by David Freeze, for the Salisbury Post. Nichole Palin was the desk clerk tonight at the Rodeway Inn in Plymouth. Freeze enjoyed talking with her about his trips and books. Photo by David Freeze. for the Salisbury Post.

When I first planned this trip, the long-range weather forecast called for days in the 60s and 70s and nights no lower than the mid-40s. Funny how all the forecasts got colder as the time to start riding drew nearer. It was 34 with a stiff north wind when I left Bayboro this morning. Just about all the clothes I had were in layers trying to keep the cold out. Throughout the day, I never changed anything except for stowing the ski mittens and changing to regular gloves.

The day had another theme, as well. I wanted to end up in Plymouth, a little more than 70 miles from Bayboro. That didn’t seem like much and it wouldn’t have been on just about any day during a summer ride.

My night in the Bayboro Hotel was wonderful. I never could figure out how to run the electric fireplace but everything else was perfect. If you are in that area, I highly recommend staying with them. One thing for sure — I stayed warm on a locally cold night.

Heading out of Bayboro, the next town was Grantsboro. My fellow summer riders would call it a real town because it has a Walmart and a McDonalds.

My first turn was north toward Aurora on SR 306. Aurora was very small but has a link to fossils and has a museum. The museum includes dinosaur fossils found in the giant phosphate and potash mines locally. There are also abundant Indian artifacts. I turned just before the small town, continuing on 306 to the Aurora Ferry which is another free ride. It covers four miles across the Pamlico River and takes about 30 minutes per trip. Usually, I enjoy staying outside during the crossing but this one seemed better in the enclosed passenger cabin. They had ferry schedules for the state, so I’m ready for the next one.

I asked one of the ferry guys what he thought about trying to make the ride to Plymouth and the best route. He told me to take simplest one, it was too cold to get lost. He also said to pedal fast to stay warm. I took the simple route and pedaled as fast as I could.

Next came Bath, the oldest incorporated town in North Carolina. I rode through Bath on the Atlantic Coast ride of 2014, so I didn’t spend long there this afternoon. I noticed two things about everybody’s infamous local hero, Edward Teach or Blackbeard. I think the house that some think he lived in doesn’t have his name on it any longer but there is pizza place in town called Blackbeard’s. “Arrrrr, slices are great!” is on the sign. Bath has the oldest library, post office and postal delivery, among lots of other things according to the historical signs. The oldest streets are Front and Main streets. One lady was walking down the street dressed in a colonial costume and said “Hi!” as I passed. I turned around to talk with her and she had vanished.

Then it got interesting. I had about 35 miles to go to reach Plymouth and still had a stout headwind. I began to think it would be close to dark by the time I made it and began to push for every little bit of speed against the wind. State Road 32 was a straight shot and I watched the sun get lower and eventually turned on my flashing red light and hoped for the best. All went well and I made it to my room just about 6 p.m., a few minutes past dark. I got a good deal at the Rodeway and was glad it was close to the SR 32/SR 64 junction.

Once in my room, I found that the heat was already running and it still is, only higher. Thankfully, the rest of the days are supposed to have moderating temperatures. I don’t think we made it out of the 40s today. This was a tough day probably because the lingering cold made me stiff and a little sore for the first time on this ride.