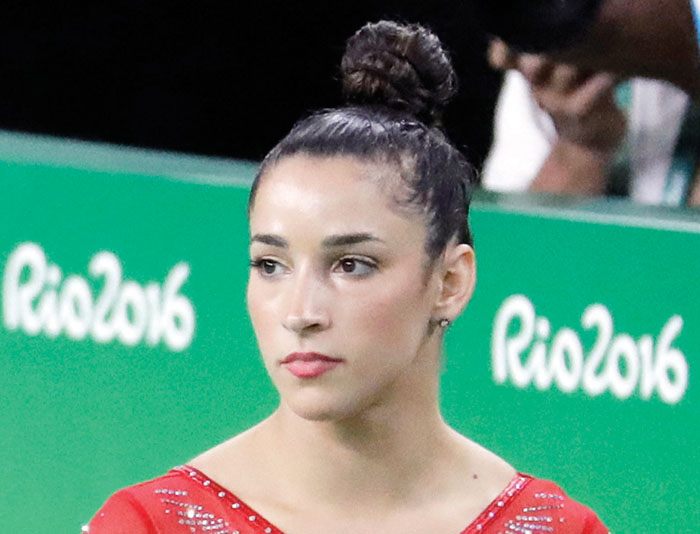 FILE - In this Aug. 11, 2016, file photo, United States' Aly Raisman rests between apparatus' during the artistic gymnastics women's individual all-around final at the 2016 Summer Olympics in Rio de Janeiro, Brazil. Raisman says she is among the young women abused by a former USA Gymnastics team doctor. Raisman tells "60 Minutes" she was 15 when she was first treated by Dr. Larry Nassar, who spent more than two decades working with athletes at USA Gymnastics. He's now is in jail in Michigan awaiting sentencing after pleading guilty to possession of child pornography. (AP Photo/Julio Cortez, File)

Olympic gymnast Aly Raisman says she is among the young women sexually abused by a former USA Gymnastics team doctor.

Raisman tells “60 Minutes” she was 15 when she was first treated by Dr. Larry Nassar, who spent more than two decades working with athletes at USA Gymnastics. He’s now is in jail in Michigan awaiting sentencing after pleading guilty to possession of child pornography.

Raisman, the captain of the 2012 and 2016 Olympic gold-medal winning teams, details the abuse in her book “Fierce,” which will be released on Tuesday. Raisman’s interview with “60 Minutes” will air Sunday night.

Raisman is the latest gymnast to claim she was sexually abused by Nassar. McKayla Maroney, who won two medals at the 2012 Games as Raisman’s teammate, said last month she was molested for years by Nassar.

Nassar also is awaiting trial on separate criminal sexual conduct charges and has been sued by more than 125 women alleging sexual abuse. Nassar has pleaded not guilty to the assault charges, and the dozens of civil suits filed in Michigan are currently in mediation.

USA Gymnastics said in a statement Friday that Raisman sharing her personal experience took “great courage” and it is “appalled by the conduct of which Larry Nassar is accused.”

The 23-year-old Raisman has been highly critical of USA Gymnastics in recent months, calling for leadership change at the top of the organization while advocating for athlete’s rights.

USA Gymnastics launched an independent review of its policies in the wake of the allegations against Nassar and reporting by the Indianapolis Star in August 2016 that highlighted chronic mishandling of sexual abuse allegations against coaches and staff at some of its more than 3,500 clubs across the country.

Nassar began working with USA Gymnastics as an athletic trainer in 1986 and became the national team doctor in 1996. He stepped down in 2014 but remained on staff before being fired in 2015.

“These girls, they should be comfortable going to USA Gymnastics and saying ‘I need  help, I want therapy. I need this,’” Raisman said in an interview with The Associated Press and USA Today in August during the 2017 national championships.

Raisman declined to get into specifics at that time about whether she was abused by Nassar but painted a vivid picture of how Nassar’s behavior went unchecked.

“I think that, you just want, you want to trust people and that he was just a disgusting person, he took advantage of so many people’s trust,” Raisman said. “And I think, it just disgusts me he was a doctor. It’s crazy. Because when a doctor says something you want to believe him and it’s just awful.”

Jamie Dantzscher, a bronze medalist on the 2000 U.S. Olympic team, filed a lawsuit against Nassar in California in September 2016. She says Nassar touched her inappropriately while disguising the abuse as treatment. Dantzscher initially filed as “Jane Doe” but came forward publicly to “60 Minutes” in February.

In July, the organization hired Toby Stark, a child welfare advocate, as its director of SafeSport. Part of Stark’s mandate is educating members on rules, educational programs and reporting. The federation also adopted several recommendations by Deborah Daniels, a former federal prosecutor who oversaw the review. USA Gymnastics now has the power to withhold membership from clubs that decline to report claims of abuse.

Clubs are now “required to report child abuse or neglect, including sexual misconduct, to proper authorities, including the U.S. Center for SafeSport and law enforcement authorities.”

The organization has taken some steps to provide more oversight and safety to its national team gymnasts.

Team members who fly into Houston for training camps must be escorted to the camp with at least two other people to avoid any one-on-one interaction. Underage female gymnasts with male coaches who are picked to compete internationally must now travel with a credentialed female chaperone. One-on-one visits by medical staff are prohibited at cabins the athletes use during overnight stays at the national training center.