David Freeze: It’s time for another adventure; 10 days on coastal NC including the Outer Banks 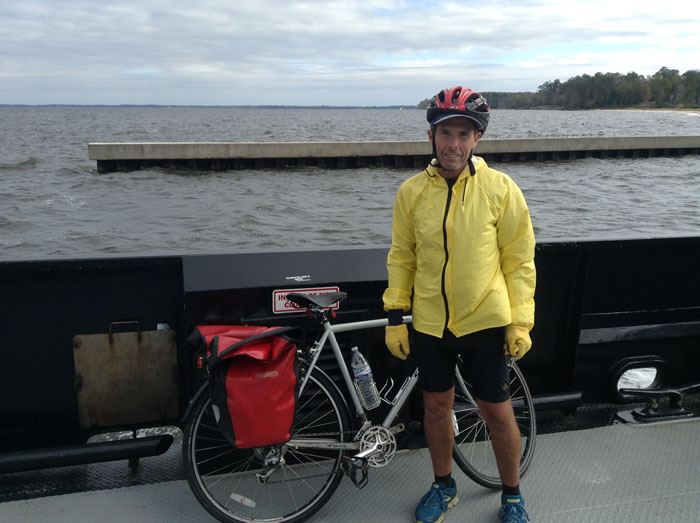 David Freeze takes the first of many ferry rides on his coastal journey. This one is the Cherry Branch ferry, about a 20-minute ride across the Neuse River.

I haven’t been to the Outer Banks since my parents took me there as a young boy. It has almost become a mystical place with all the history and scenery. I’m betting there are a few characters residing nearby, some of those folks that I love to visit along the way on my bicycle trips.

On Thursday, I headed to Morehead City and left my truck there until I return nine or 10 days later.I will pedal north through towns that mostly I have never visited and a few that I have.

I remember stopping in Elizabeth City on my Atlantic Coast ride in 2013 looking for ice cream and a bike shop. I found the ice cream. This time, I will have my sights set on available Dairy Queens and the preferred pineapple milkshake if the weather is not too cold.

Near the Virginia line, I will cross over to the Outer Banks and get a close-up look at Duck, Corolla, Kill Devil Hills, Manteo, Rodanthe, Hatteras, Okracoke on the way back to Morehead City.

There should be multiple ferry rides and almost continuous ocean views as hopefully the prevailing northerly winds push me back toward the south.

I haven’t ridden the bike since returning in late July and was surprised to find the tires up and the taillight still working. I know that I have problems with the cyclometer but nothing that won’t work for a few more days. The tent and sleeping bag won’t be going this time because I plan to carry a more relaxed approach and seek out the older fishing motels along the way.

I have a great guidebook and only plan to cover about 50 to 60 miles each day, maybe less as I look for the many points of interest. Short days and early darkness will get me off the road by 5 p.m., a real treat.

Instead of railroads and big bridges, I will be looking for lighthouses and enjoying the flat road.

Flat is something that I haven’t experienced the last few summers while riding through the western Rockies. It is impossible to say how much I won’t miss plugging along in the granny gears and making 4 mph while the front wheel is pointed upward.

My clothing will include a few heavier pieces and a good raincoat, but still will be focused on shorts and several layers of shirts. The supply points will be close enough that no great cache of food or water will have to weigh the red bags down.

My same tools and miscellaneous pieces of gear including extra tubes and CO2 cartridges will be in the bottom of the bags where overcrowding shouldn’t be an issue. Patsy McBride’s angel and the famous spoon and fork will ride along as will my prayers asking for another safe ride.

As before, I hope Rowan County rides with me on this journey. I love hearing what you know about the many areas that I am about to visit. Very often, its your suggestions about what to see and where to stay and eat that matter the most.

And more than once, I make another good friend after hearing from you.

My latest book, “Cycling the Northwest,” just hit the shelves at Father and Son Produce (home of Twin Bings), South Main Book Store and Patterson Farm Market. They make great gifts and have the real scoop about the ride, some of which I couldn’t put in the paper.

So let’s head out for another adventure. I hope you can ride along.

On Thursday afternoon, I drove to Atlantic Beach in rain that intensified along the way. Once at the beach, I drove around and found a good deal, then explored some in the rain before spending the evening trying to plan the first part of the ride.

I wanted to travel what some call the “Inland Banks” as I head north but couldn’t figure out the best route. Lack of a good detailed map of all the small towns made it difficult. I knew where I wanted to go Friday but not how far I could make it before the early darkness limited the day.

My first thing was to leave the truck at the Trinity Center in Salter Path. Thanks to Mickie for arranging this. It is really hard to leave a warm truck to head into a north wind that was predicted to get colder throughout the day.

I rode back to Atlantic Beach, then passed briefly through Morehead City as I took State Road 70 to the north side of Beaufort. Traffic was heavy in this area but there was room to ride and courteous drivers.

The nuts and bolts of this journey got started when I turned north on State Road 101 from Beaufort. The road was good with lessening traffic until a turn on State Road 306 took me on a secluded five-mile road to the first ferry of the trip. I anticipate quite a few ferry rides, especially on the Outer Banks.

I turned on the five-mile road to the ferry with 30 minutes to go before the loading, quickly deciding that I could not make this crossing because of the slow pace due to a steady headwind.

The first big surprise of this journey came as I rode onto the ferry just as the ramp operator was about to close it. With just 10 seconds to spare, I saved an hour of waiting for the next crossing. This ferry crosses the river every 30 minutes but it stops for 30 minutes at 1 p.m. for lunch, meaning that the next ferry would have run an hour later.

After trying to find a good North Carolina coastal map at multiple convenience stores during the morning, I got one at the N.C. ferry office once the ride was done. The operator said the office can hardly keep maps in stock but I finally had the detail I need to set up future day’s rides.

Once exiting the ferry property, I rode into Arapahoe on N.C. 306 North, turning quickly onto a multinamed road that followed the Neuse River for a while and then turned toward Oriental. I took a photo of China Grove Road. I had always heard of Oriental, but as with most of the towns on the rest of the trip, I had not visited them.

Oriental is a high-end sailboat and yacht town on the banks of the Intracoastal Waterway and Pamlico Sound. When inquiring about a motel, I was told, “There is nothing but upper-class lodging here. You won’t find anything cheap.”

It appears that he was right.

The town got its name from the sailing steamer Oriental that was used as a troop transport early in the Civil War. It ran aground nearby and, legend has it, the postmaster found the nameplate and proposed the new name.

I pedaled on to Bayboro and one of the coolest lodgings that I have experienced in all my travels. I had called earlier and spoken to Gus McDonald, a transplanted Scottish-born American citizen. We negotiated a good rate for a huge room in the old motel.

Gus was great fun to talk to upon arrival. He has plenty of travel stories himself. The room and hotel has everything, plus I have more room than anytime other than spending nights in churches on the cross-country trip.

I look forward to a little better sleep and some better planning now that I have a good area map. I will continue north today in the early morning cold, the main reason I brought some heavy clothes. Upcoming towns include Washington and Elizabeth City. I anticipate at least a couple of more days of riding before reaching the Outer Banks.

I hope you will enjoy the trip!

David Freeze can be reached at david.freeze@ctc.net.